Conviction represents a change to the Splinter Cell franchise and a change that is not completely successful. Aside from being much easier than previous games it also contains more action. So much so that one segment plays out exactly like a third person shooter. Not all the changes are detrimental to the franchise, the Mark and Execute component actually improves some of the gameplay. The AI is usually competent to go up against but occasionally does some pretty silly things. The presentation of the game is relatively effective and using projected messages as a tutorial and for mission objectives is actually unobtrusive. The changes to the basic mechanics of the series are not replaced by anything of comparable quality and consequently the stealth gameplay lacks.
Conviction uses the Unreal 2.5 engine, although visually it does not look very old at all. Performance of the engine is satisfactory for the visuals and the lighting is good with Sam able to shoot out most lights to hide in the darkness. The game also includes a system where objectives and hints are projected onto the world. Opening levels featured words like “Cover” and “Climb” in obvious places to gently bring players into the action. As the game progresses these projected messages simply point out your next objective. It blends in naturally as you move throughout the levels and these messages slowly come into view. They do use this projected system in a later cut scene to convey obvious emotions and disappointingly it does reduce its overall effectiveness. 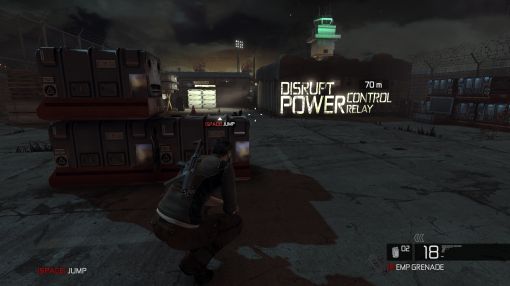 Projected text may inform you of your next objective.

The visuals turn greyscale whenever Sam is in stealth mode and enemies are colored to highlight them in the world. I’m not convinced this change in color saturation works too well. In greyscale the shadows and dark hiding places become much less obvious as they blend into the surrounds. So you are more likely to accidently move out of the cover of darkness and receive a face full of abuse and bullets. Also in stealth the game also looks visually unappealing because of this lack of color and seems to very subtly punish those who do attempt to play in an unseen fashion. Not all the stealth is done just in the cover of darkness however.
Sam hides just as much behind objects in the bright lights as he does moving swiftly through the shadows. The level design in some situations almost relies on the careful positioning of half height walls or boxes. The upside to this is you can close quarters kill an enemy who is near an object you are hiding behind. The position of these boxes and walls could be directly comparable with other third person shooters with cover mechanics where you move from cover to cover and pop up only to shoot. It also highlights at times how unsatisfying the campaign level design is. 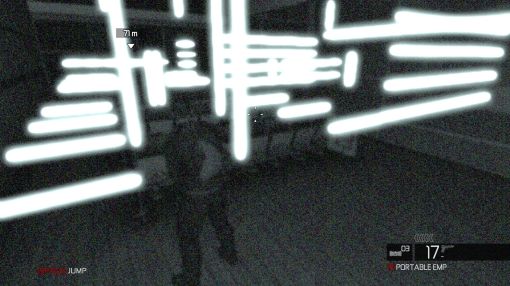 Aside from the position of these contrived boxes the game also features its share of platforming. This might be climbing up walls, over balconies or up and along pipes. Some can be done during combat where you move from window positions or in pipes above enemies. In particular the position of some brightly colored pipes is completely ludicrous and serves only as a simple transition from one point to another; they really needed to try harder here.
123Next