It might seem obvious, but one of the best parts of using the PlayStation PlayLink has been how easy the games are to share with your friends. The gameplay of the PlayLink titles has been pretty dispensable, but the ease of use and ability to bring people together is a rare feat in a piece of software. In fact, it’s been fun to gather my friends, with a wide range in taste and video game literacy, on a game night for these reviews and see them react. So I was excited to give the latest PlayLink game, Frantics, a go, hoping for that same experience. But that excitement was quickly diminished. 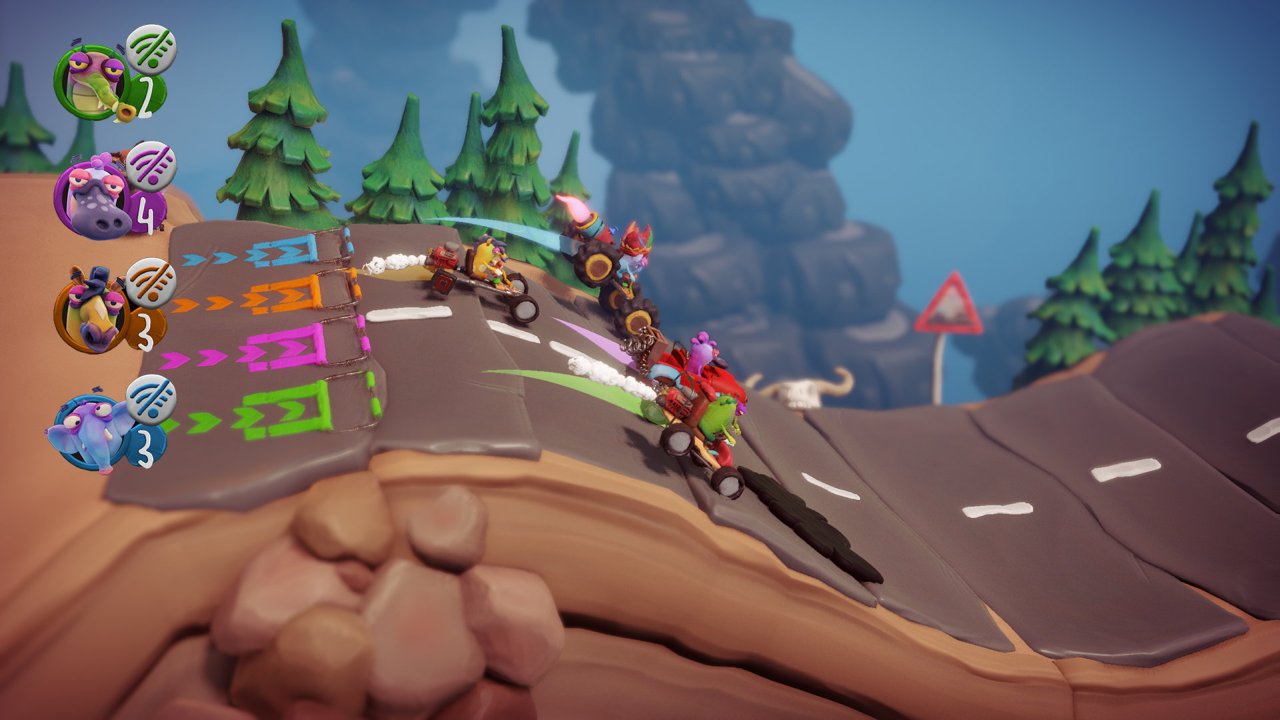 If you’re not familiar with PlayLink, it’s a fairly new approach to software from PlayStation that is focused on multiplayer, having multiple people use their smart phones instead of controllers to interact with the action on-screen. Other games in the library include Knowledge is Power and Hidden Agenda.

In Frantics four players compete in a series of mini-games to earn crowns. Your total number of crowns at the end of the game determine how many lives you’ll have in the Grand Finale fight. Whoever wins the Grand Finale wins the game, so even if you don’t do well in the mini-games leading up to the final fight, you still have a shot. After each round, a British fox, aptly named Fox, plays the role of wildcard - distributing points and providing secret objectives to help keep things close.

The concept itself is smart; the series of mini-games lends itself to Mario Party comparisons, which is good company to keep. The game mode defaults to playing Fox’s Party mode, described above, but that mode can be a bummer if you have more than four people who want to play. Fortunately, in a hard-to-spot options menu, there’s a way to play one-off mini-games that allow you to quickly cycle players in. It’s a smart feature, but that’s almost all Frantics has going for it. 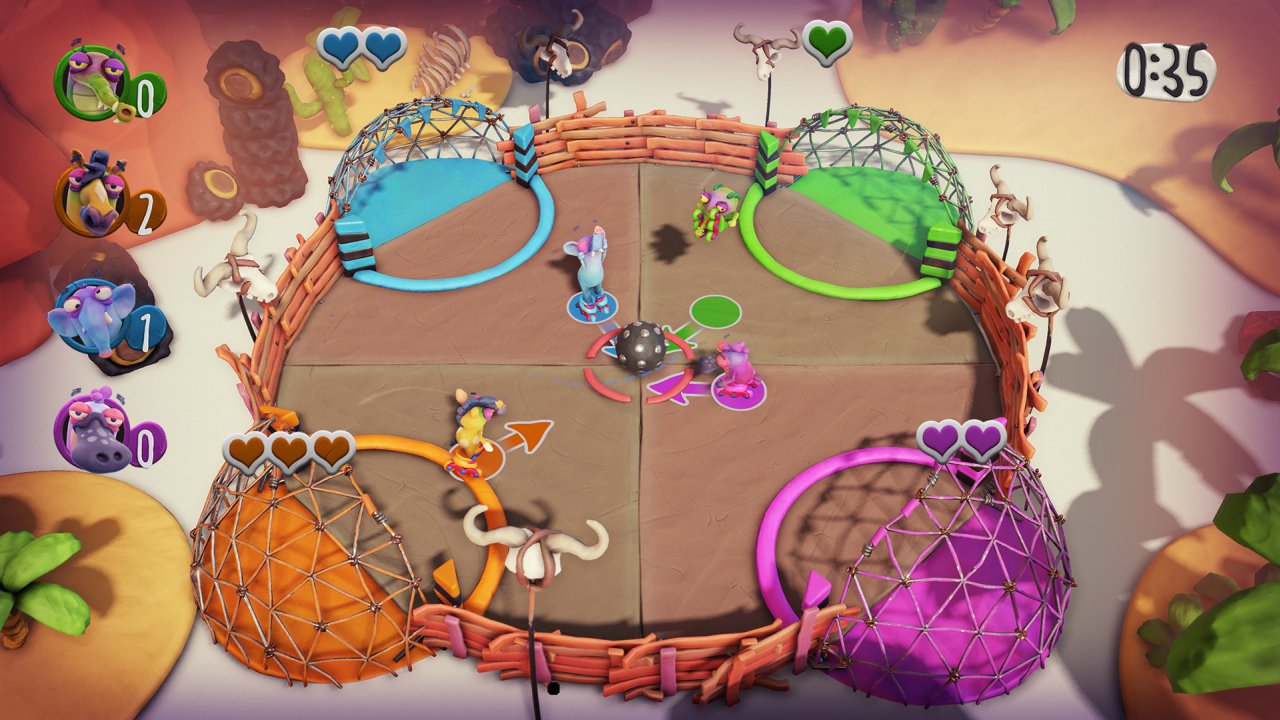 Going back to Fox’s Party mode, since that’s the version Frantics think you’ll play the most, it struggles to find a rhythm to engage players. The fun is constantly interrupted in order for Fox and his tutorials to explain the rules, which isn’t conducive to a party game - constantly killing the momentum. There also isn’t a great way to practice the mini-games. You either have to turn practice rounds completely on, completely off, or set it to only occur for games you haven’t played yet. It would be nice to have the game offer to skip the practice modes, but always offer them - like is common in Mario Party games. The structure is strange as well. Players compete in multiple rounds of each mini-game and it seems like they get longer or shorter at random. That structure continues to be an issue in the overall pace of the game. Fox’s Party doesn’t last long enough for inexperienced players to catch up to more experienced ones, so it’s really an overly long tutorial. Part of the fun of a party game is that you should be able to sit down with anyone and have a good experience, but Frantics doesn’t lend itself to that.

Some of the reasons for that is that the game doesn’t feel great on your phone. There are a lot of tilt controls that you use to guide your character in the game and those controls are frustrating. There’s room for forgiveness since this is a party game, but these unwieldy controls make things more difficult for newcomers, rather than leveling the playing field. One of the mini-games is supposed to be difficult because it’s set on ice and it's easy to slide right off the edge of the arena, but the physics aren’t much different from the other mini-games with free movement, as they all feel like they’re set on ice. The mini-games also have a lot of quirky rules that aren’t obvious unless you’ve played them a couple of times, like how multiple people can share a win in the Ice Pickle mini-game or how two people have to trigger buttons in Friendless Runner or everyone loses a heart. This is an area where I’m normally very forgiving with these kinds of games, but Frantics really isn’t fun when it’s so cumbersome. It tries to explain everything in the previously mentioned tutorials, but it’s not fun to sit on a tutorial screen as everyone tries to learn the game.

One example of the mini-games is Dough Knights, which has you use tilt controls to move around an area and collect donuts on a lance. In addition to that, you’ll need to tap on the phone to hit other players and cause them to drop all of their donuts. You also have to avoid the explosive donut. It’s difficult to tell which donut is the explosive one, but you phone will vibrate when you have it. You can give it to others by hitting them with your lance. It’s a lot of movement for a disposable mini-game you’ll play for five minutes. Collecting donuts is easy enough, but remembering that the buzzing on your phone isn’t an incoming call or text message is the tricky part. Actually, the tricky part is trying to aim yourself at anyone else. As with most other mini-games, the movement feels a bit like bumper cars as the most inexperienced players randomly crash into each other. 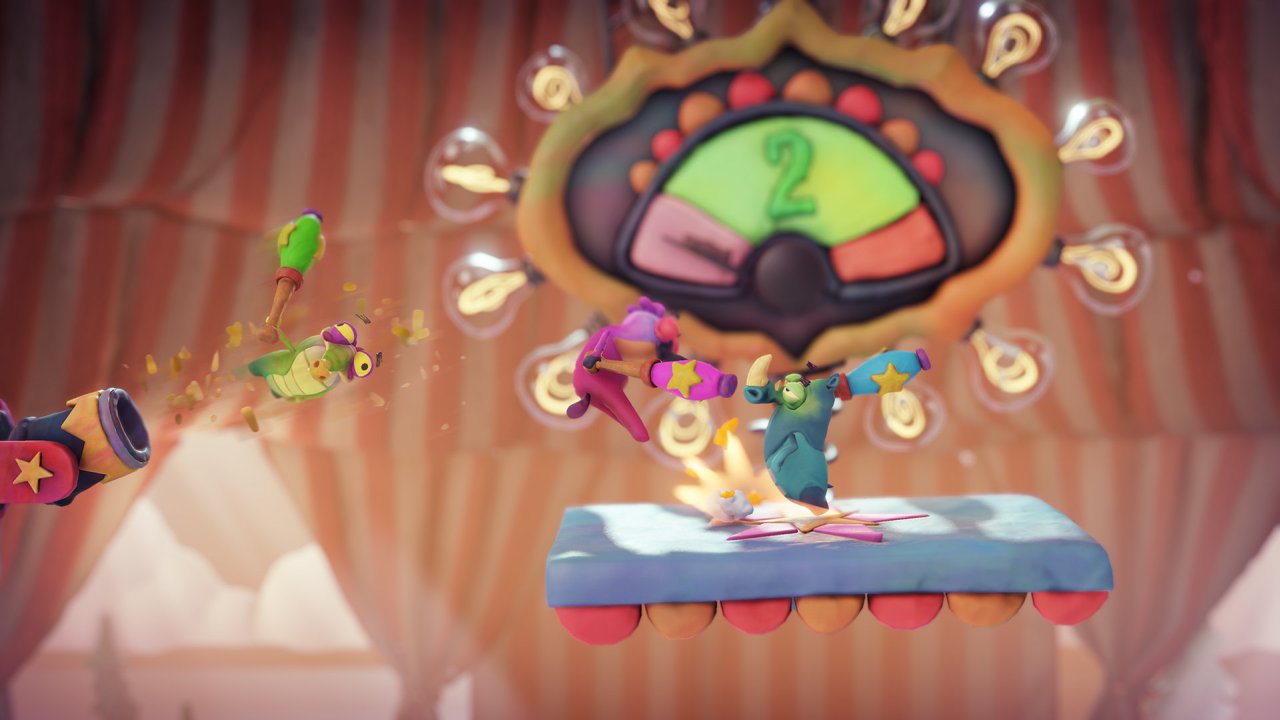 Another game is ParaChuChu, where players drop from the sky and run into each in an attempt to collect coins, paying attention to how close they are to the ground so they leave time to open their parachute. But again, using the tilt controls is difficult at first and only those with practice can really maneuver their way, back and forth, collecting the coins available. Also, in the second run of this, dynamite is thrown into the mix, which is passed from player to player through contact. Lastly, one time Fox paused the game to have players bid on a bomb defusal kit, which would prevent the dynamite from detonating on you. That’s of a cool twist, but it requires you spend as much time listening to Fox and pausing the action as it does to actually play the game.

One of the larger issues with the game is the tone, which I found off-putting. The host, Fox, seems despondent and inconvenienced by the player, which makes him unlikeable. His droll attitude doesn’t make him seem cool or the game feel fun, it feels like clumsy humor that never really lands. It would be fine if you could skip his dry quips, but it seems like Frantics is using these moments for loading the mini-games, so you’re forced to listen to all of it. In fact, a lot of the sound design was a little grating with its overly quirky noises. Frantics is swinging hard with a unique sense of humor, but it rarely connected for me.

The kooky affectation dips into the art as well, which I think is better. The claymation design is charming, and there’s a fun use of it when animals explode or fall to their doom, splatting on the ground like a ball of clay being dropped onto concrete. It’s not perfect, but it’s serviceable in giving the game a unique look. The only issue is Fox, whose animations are really odd. There’s been some effort to make him look like his lips are moving, but it’s poorly dubbed.

I also had some technical issues with Frantics. During multiple games, players seemed to randomly disconnect at times. Their phones giving them an error message saying that they couldn’t connect to the game and even when the connection seemed to be established, the character was still not responding to their movements. This is something I’ve seen on occasion with other PlayLink titles, but never this often. 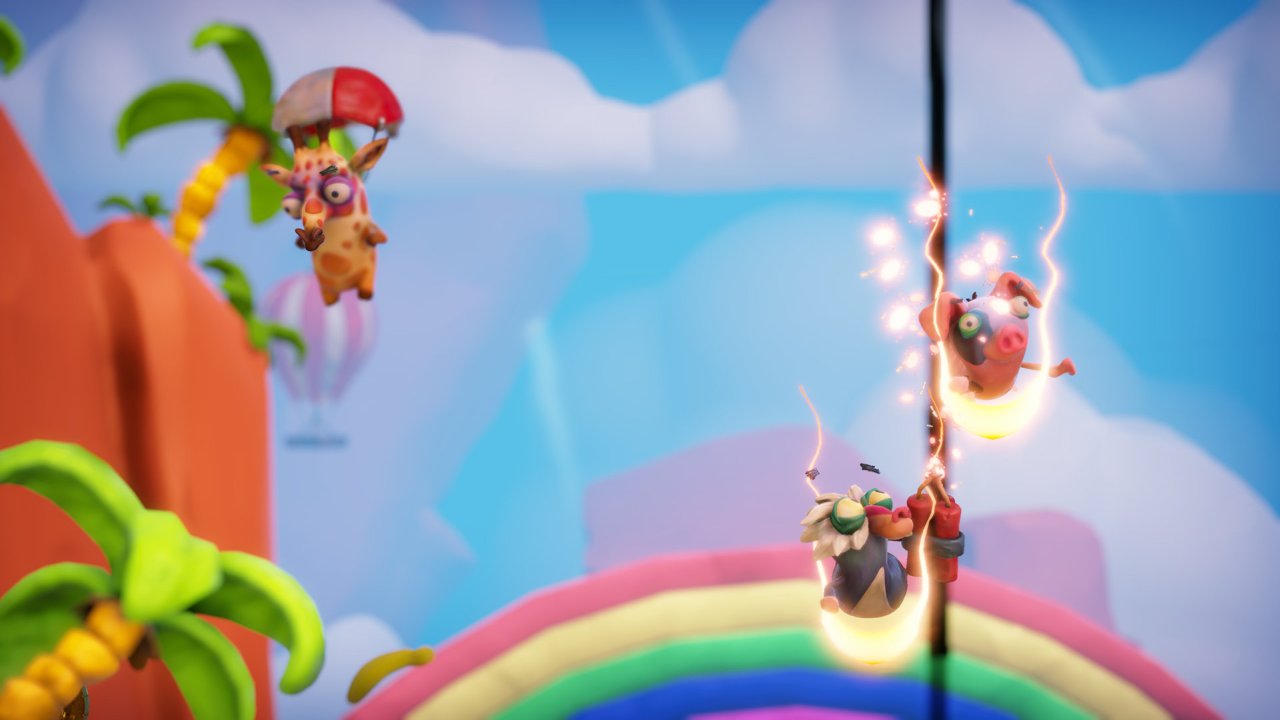 I wish that I could say that Frantics was at least disposable fun and you could get a couple of fun nights out of it, but I never found it to be a very enjoyable experience. I tried playing the game with multiple people at different times thinking that it could grab me at some point, but the frustrating controls, the constant derailing of the experience, and off-putting tone leaves this game feeling hollow and boring. It’s a bummer, but Frantics sucks the life out of the party.

Our ratings for Frantics on PlayStation 4 out of 100 (Ratings FAQ)
Presentation
66
The claymation is a fun aesthetic, but the game seems to be trying for a mischievous tone that comes off as patronizing and droll.
Gameplay
58
Whether I was trying to swipe my screen to move a character or tilt my phone, the whole thing feels inconsistent.
Single Player
NR
None
Multiplayer
64
Fox’s Party mode is uneven. The cap on players makes it hard to get everyone involved and its need to constantly stop the action for boring explanation is awful. Luckily, you can just switch to playing the mini-games - which is better.
Performance
57
I’ve played a few PlayLink games and I’ve never run into the issue of having phones constantly disconnecting from a game, and even after reconnecting players couldn’t control their character.
Overall
60
Even as a simple party game, it's difficult to recommend Frantics. There's just nothing that really stands out as a high point. It's flawed in almost every way that really matters and doesn't offer the levels of entertainment one would hope to get from a game like this. 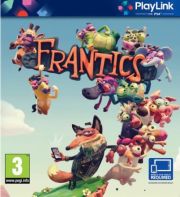 All videos for Frantics (1)
Advertisement ▼