An uncommonly bizarre premise with some good effort behind it

The subgenre of ‘visual novels’ is a curious one. Relying almost exclusively on reading lines of dialog with static character portraits and illustrations, and occasional moments of choosing your character’s dialog and actions a la the old Choose Your Own Adventure books, this type of game has flourished in Japan for ages, but has always had virtually no presence in Western countries. 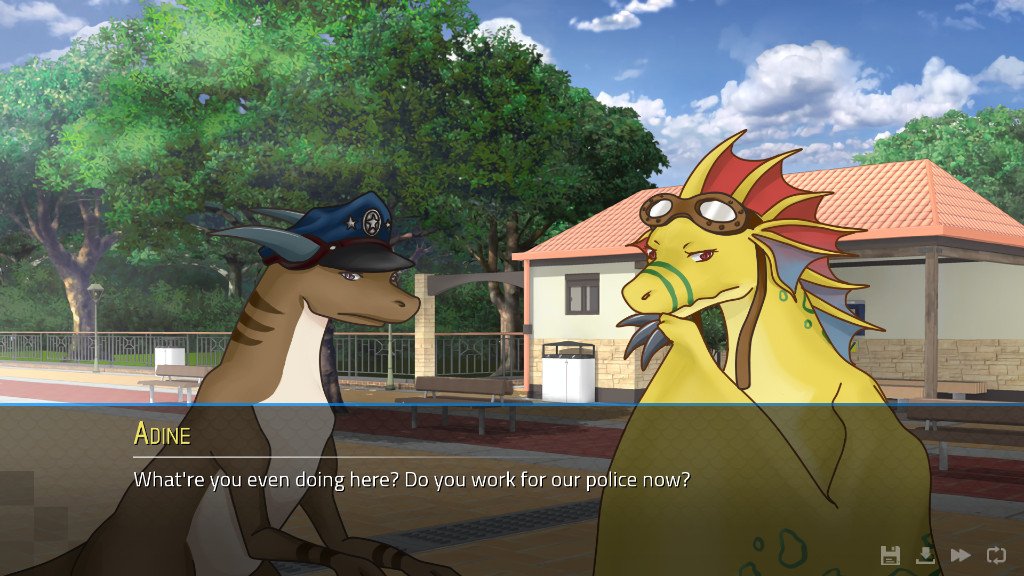 Sleeper hits like the Ace Attorney, Zero Escape and Danganronpa franchises being localized have changed this slightly over the years, and I suspect their success may have inspired indie developer Radical Phi to take their own stab at the genre with Angels with Scaly Wings. Despite relying on a setup that sounds straight up ridiculous, playing (and reading) the game makes it clear that its writers put a lot of effort into thinking about just how to flesh out that premise into something with substance, and while not every aspect is pulled off with flying colors, the final result is a unique experience among indie games.

The prologue establishes that a futuristic society in need of resources discovers a mysterious portal a la Stargate, and the first humans to try it out report a bizarre discovery: a world similar to our own in language, culture, and technology, but instead populated entirely by intelligent dragons. Eventually, two human ambassadors, that being a scientist named Reza and the protagonist we witness the story from through a first-person view, are tasked with trading the dragon civilization information that could benefit their world in exchange for energy generators to help mankind.

It wouldn’t be a very lengthy or interesting game if that was what the plot actually revolved around, and though initial meetings with dragon officials go smoothly, some distrust between certain characters leads to a messy scuffle, a party unaccounted for, and the start of a string of serial dragon killings. The protagonist (the game is careful to never specify your character’s gender, and also lets you name them) soon find themselves going from a simple representative to a police accomplice, and must choose where to investigate and who to talk to in order to stop the killings, and possibly answer other mysteries that crop up in the process. 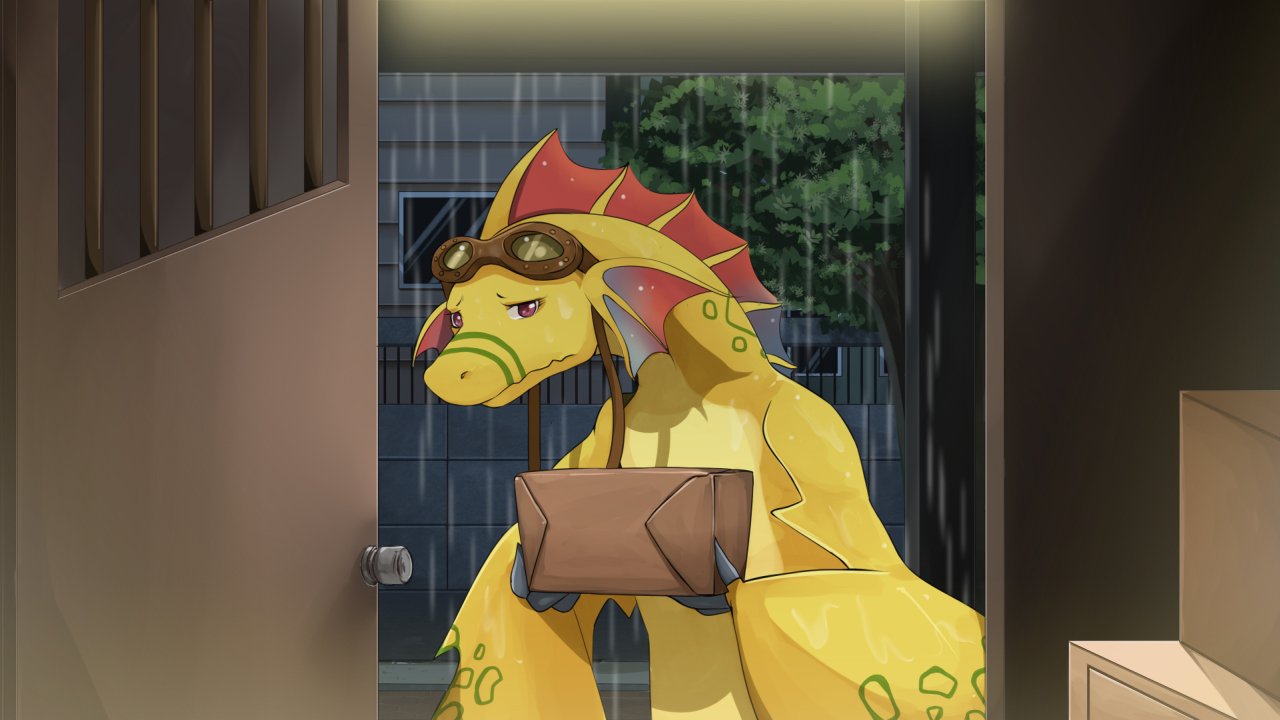 There’s no getting around the fact that the story’s central conceit sounds more like something meant for comedic purposes than a genuine murder mystery, and the fact that it’s possible for the protagonist to bond and even fall in love with certain dragons doesn’t help. It’s to the writers’ credit that rather than dwell on the oddness of the dragon world, the plot quickly dives more into both fleshing it out and setting up the supporting cast. Some dragons, like police detectives Bryce and Sebastian, you’ll frequently encounter mandatorily, but as each section of the story allows players to choose either which dragon to visit or sometimes which location to investigate, who ends up being key players during the finale (or is even still alive by that point) varies wildly based on those decisions.

There’s also the fact that specific encounters will also lead to you discovering other dragons with their own quirks and conflicts that you can easily miss by focusing on other characters. There is absolutely no way to see everyone or even get one of the better endings your first time through, as the game actively encourages replaying its roughly three-hour campaign to discover new story elements, and possibly even put discoveries you made in previous paths to good use in your decision making.

Having to go back through numerous scenes you’ve already read through (there’s no voice acting to speak of) is never much fun, but the game smartly implements hotkeys to fast forward through repeated dialog, and also has built-in moments where the game asks you if you want to skip previous linear segments altogether. There are also a ton of saving and loading options, with dozens of manual slots, several automated slots, and a single quick save and load hotkey. Unfortunately, I did notice that manually attempting to scroll back through previous text with the mouse wheel usually wouldn’t let me pick different choices, which would have been an additional layer of convenience. 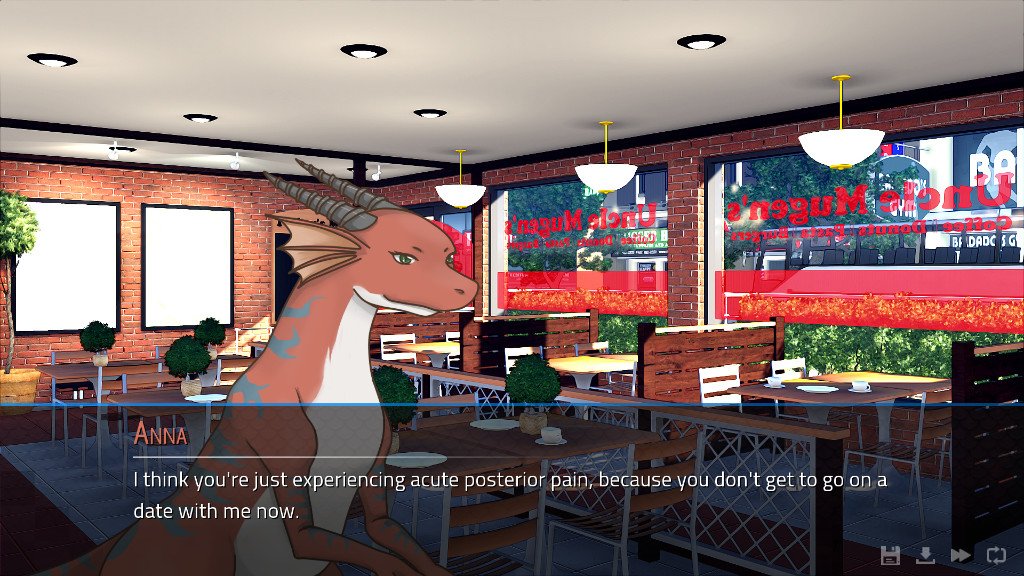 One thing Angels with Scaly Wings does to help its premise work better is the amount of effort put into fleshing out the dragons’ parallel world. Expect to hear about the characteristics of different species, how those play into their society, where their technology and customs differ from ours, and even how the concept of humans fits into their own folklore. Despite the characters making use of an artstyle I found rather cutesy, the world feels well realized, though the amount of time spent detailing their science and myths can get rather tiring.

The decently sized cast of dragons generally feels distinct from each other, though how interesting each individual is can vary. My first playthrough had me focus on the small but creative Lorem, who was interested in having the protagonist offer input on a video game based around myths he wanted to make, and loved to spout facts relating to those fields. My second playthrough focused on the kindhearted waitress Adine and her time spent either looking after kids or practicing for a flying competition. Not every key player is engaging to chat with, like the by-the-book head detective Bryce, but interactions can provide isolated fun moments, like when he challenges the player to a drinking contest.

The effort put into the writing unfortunately isn’t equaled by the game’s visuals, which are the weakest aspect. The character artwork usually feels more like something done by a DeviantArt amateur than a professional artist with its very basic poses and expressions, though select full-screen images to show key events sometimes fare better. Also, while some of the static environmental paintings look good, others resemble photos or 3D models with a hasty filter applied over them. On the plus side, the soundtrack has more decent tracks than duds. 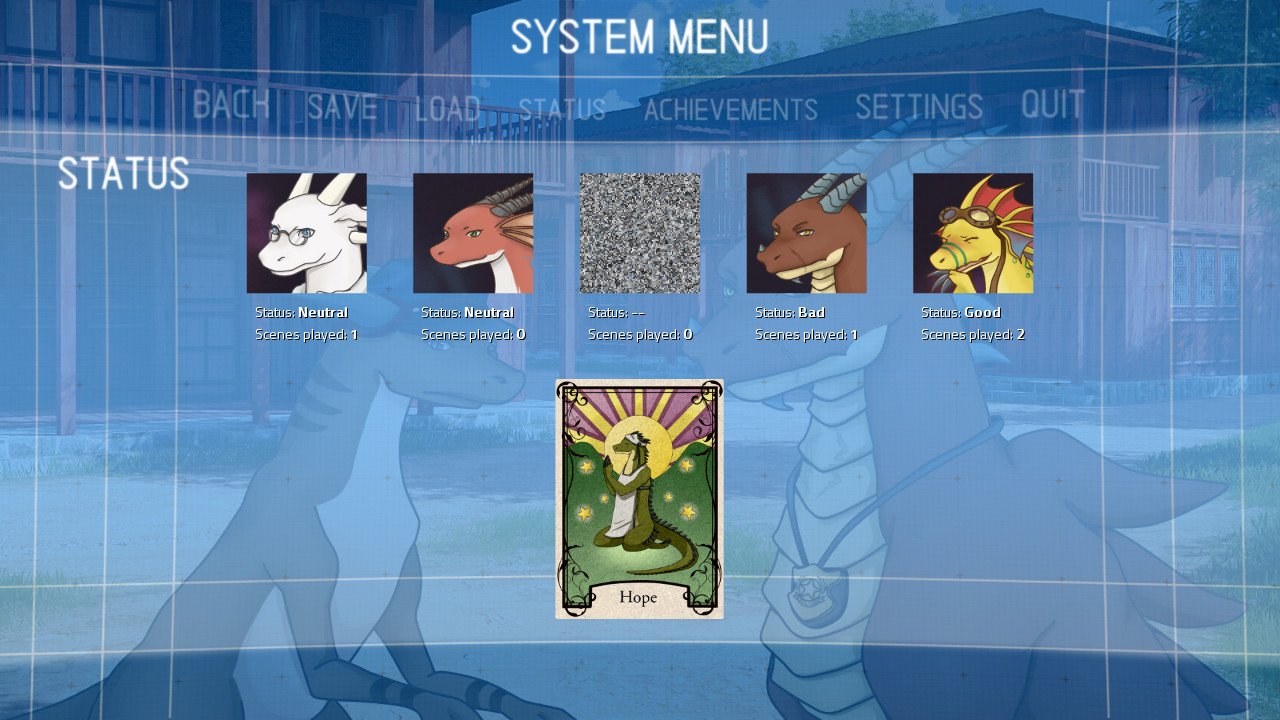 Despite glaring issues with its aesthetics, I still had a rather good time with Angels with Scaly Wings. Fans of games like Ace Attorney may have issues with the game’s lack of actual exploration and puzzle-solving (save for a few minigames you play during certain encounters), but its story is a nice mix of fantasy and sci-fi elements that throws some good surprises at you the more you dive into it. It’s not going to take the indie scene by storm, but that doesn’t feel like the developers’ intentions. It feels more like it was made to be a solid diversion for adventure game enthusiasts, and I’d say that goal was generally met.

Our ratings for Angels with Scaly Wings on PC out of 100 (Ratings FAQ)
Presentation
65
The character interactions that serve as the game’s basis are decently written, and the core mysteries and cast are usually engaging, but the game’s overall art style gives off an amateurish feel that distracts at points, though the ambient soundtrack fares better.
Gameplay
75
There’s a whole lot more reading than decision-making to do, making a gameplay evaluation somewhat difficult, but players willing to try a purely dialog-driven title probably won’t mind this aspect much.
Single Player
80
There’s a decent amount of replay value for those willing to try different paths on additional playthroughs in order to get the best endings, and a robust save system and handy fast-forward feature helps to ease possible tedium and frustration.
Multiplayer
NR
None
Performance
(Show PC Specs)
CPU: Intel Core i7-6700HQ
GPU: Nvidia GTX 970M
RAM: 16GB
OS: Windows 10 Professional

80
No hitches or bugs to speak of, though considering the title’s very limited presentation, this isn’t surprising.
Overall
74
Angels with Scaly Wings generally overcomes its goofy setup and simplistic presentation to deliver a character-driven plot with some good surprises, making for a decent little diversion of a game.