Bad spawns, frustrating maps, connection issues and imbalances are all traits of the Dark Side, but there is some good left in this beautiful shooter

Two and a half years ago, in a galaxy called the Milky Way, Electronic Arts extended their Star Wars game license for another 10 years. With the seventh Star Wars movie looming, they scrambled to produce a game that could ride the unstoppable hype-train. Star Wars: Battlefront is the first major game in this license, and its association with perhaps the biggest movie franchise in history may see it succeed in sales alone. Developed by DICE, best known for their Battlefield games, it is a multiplayer shooter that is a truly authentic to the Star Wars franchise. It focuses on the conflict between soldiers of the Rebel Alliance and Stormtroopers of the Galactic Empire. Star Wars fans will recognize many locations, objects and even characters. It is a reboot to a gaming franchise, although this time it is based entirely on the original series. DICE was surely the best developers for the job, given their multiplayer track record, but this was still a difficult project to tackle. Nonetheless, as is the lure of the Dark Side, EA’s desire to bring Star Wars to the Frostbite engine was too powerful to resist. 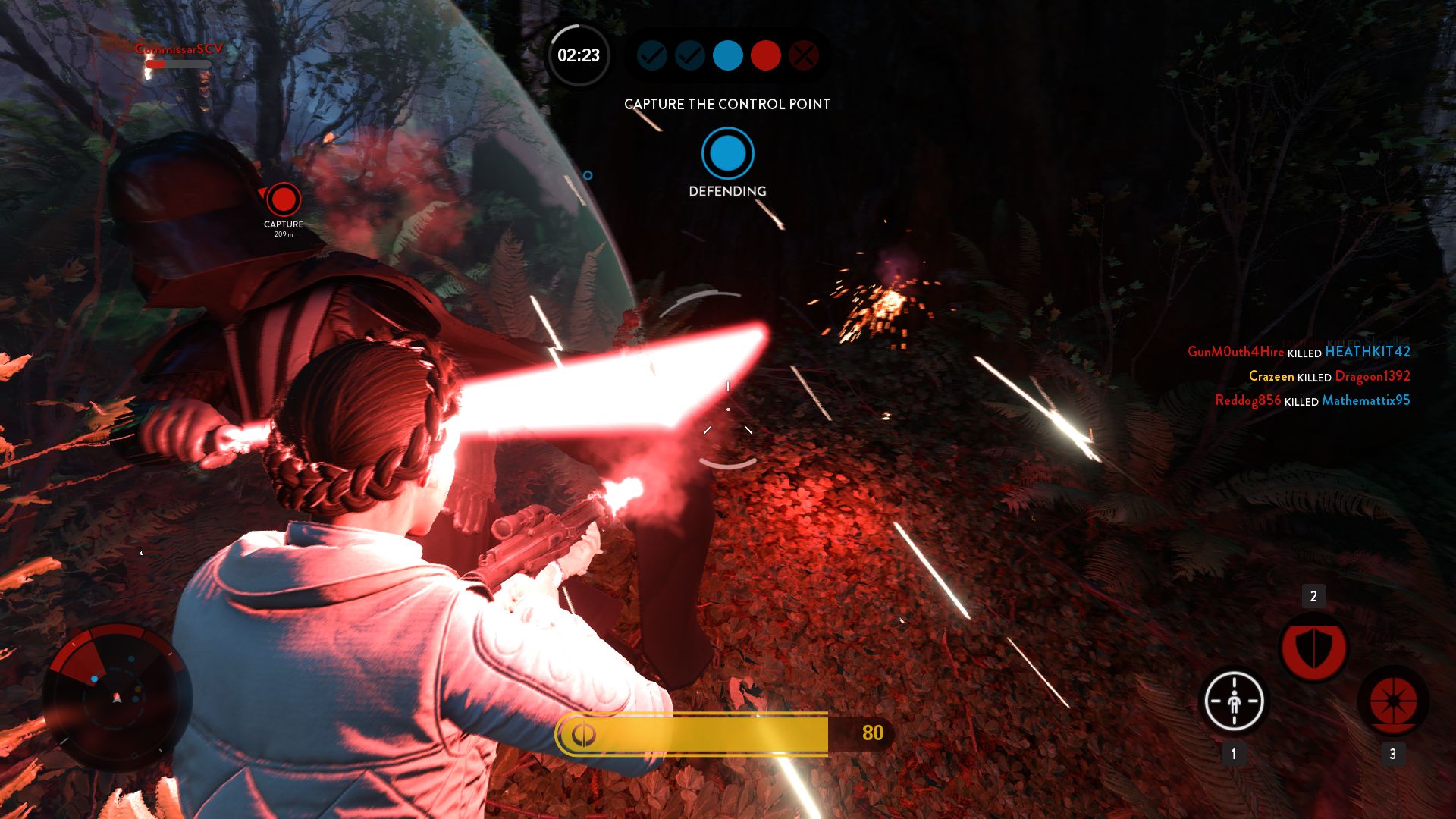 Less violent than most family reunions

Star Wars: Battlefront looks absolutely stunning. The Frostbite engine has been an asset in recent games and it looks ever better here. Although the destruction in Battlefront is minimal—even less than in Battlefield: Hardline—it more than makes up for it with lighting, textures, reflections and visual effects. DICE have faithfully recreated planets, characters, droids, vehicles and even structures from the movies. The attention to detail is exceptional, from the mud that collects on your boots to ice forming on your weapon. The engine is particularly good at rendering landscapes and this is demonstrated across the four main planets of Hoth, Endor, Tatooine and Sullust. Whether running through the ice caves on Hoth or jumping over magma flows on Sullust, the environments are stellar. Tatooine makes good use of sand, despite its coarseness and propensity to get everywhere, along with rocky outcrops. Endor is on another level though, with perhaps the best foliage since the lush grasses in the third Crysis game. Plants sway beneath your feet as soldiers battle on treetop walkways. Trees are felled by explosions—they even creak on decent—and sparks rain down from bark. The free DLC released at the start of December included another beautiful planet, Jakku, and it has vehicle carcasses strewn about sand dunes while battles rage overhead. The engine has no problem rendering these locations, maintaining high framerates on ultra settings. When it comes to the visual emulation of Star Wars, Battlefront is nearly perfect.

Frostbite is also known for its superb audio effects and the association with Star Wars is a recipe for success. The exacting sounds are found in everything from the standard blaster zaps to the booming thuds of the AT-AT walkers progressing through a canyon. It might be as subtle as the twangy reverberation noise when the heavy blaster ceases firing, or the minimalist beeping from a thermal imploder about to eliminate nearby enemies. Friendly soldiers will make comments about the match—they complain when you shoot friendlies and ask if you are injured. The musical score is also quite good, with some original works that blend well with the official theme. The sound and visual package is one of the best this year. 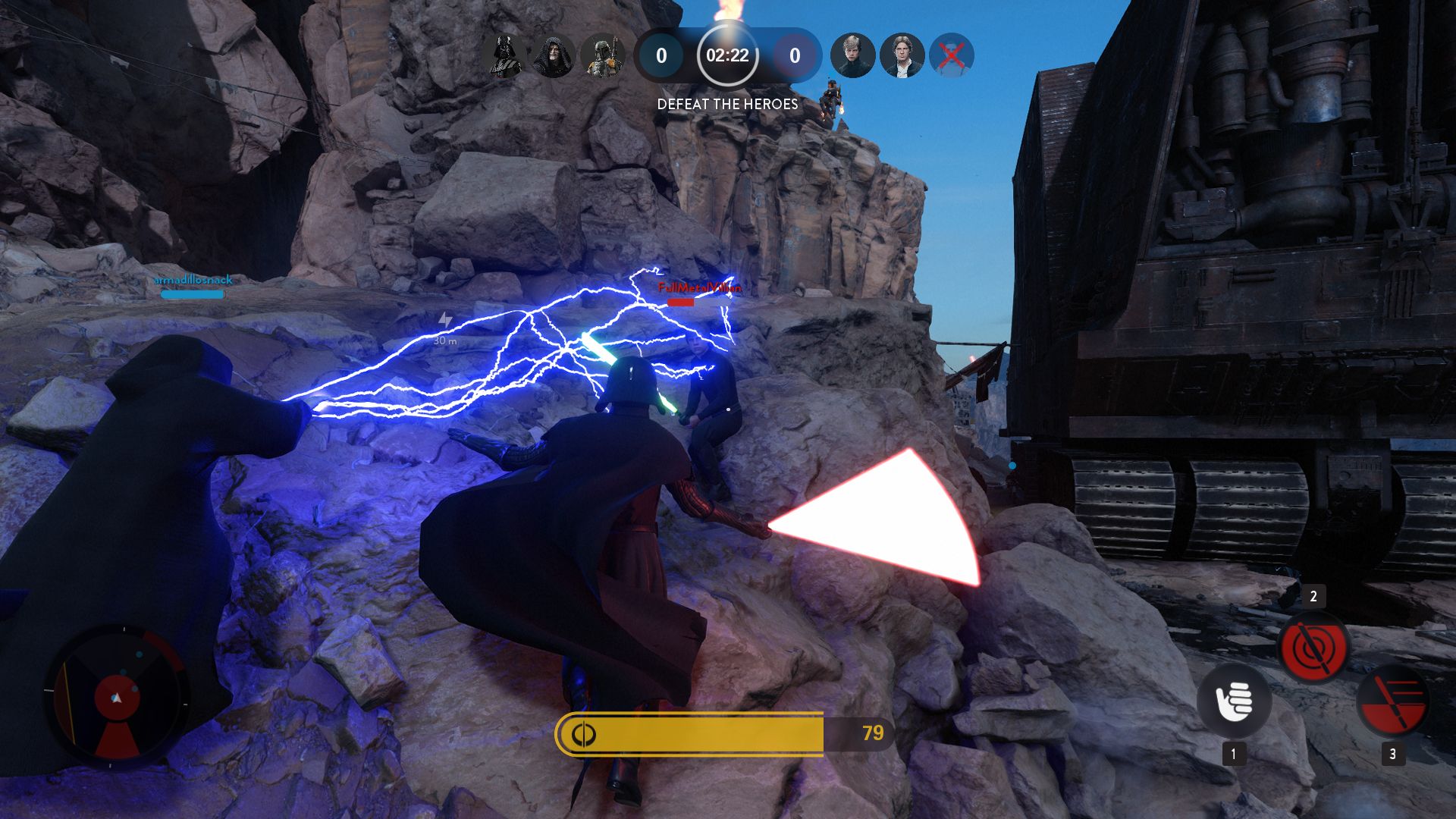 But, how does it play? Not quite like Battlefield, but there are similarities. It aims for a more arcade experience, which makes sense given the very large potential target audience. Unlike Battlefield, there is a third person view that can be exploited cheekily by peaking around corners. There is no accuracy penalty for not aiming down the sights, which is quite refreshing and quickens the pace. Movement is also rapid with infinite sprinting. Clamouring over uneven ground is mostly trouble free, although you will still struggle up inclines. Energy projectiles from blasters travel slowly, which means leading distant targets. There are various blaster types, roughly equivalent to modern guns—pistols, heavy blasters (light machine guns), and even a shotgun type blaster.

The action is not just blaster fire, as many deaths will come from Star Cards. Three different Star Cards form a hand—you can only create two hands—and two cards are basically equipment slots with the third being a charged card that acts like a modifier or special ability. Cards can be purchased, and upgraded, using credits earned from playing, and these credits can also unlock different soldier faces and emotes. The two main cards are for equipment like grenades, sniper rifles, or a jump pack. They have a short cooldown and infinite uses. Using two grenades feels like cheating, since you can spam them together for easy kills. The charged Star Cards can briefly modify blasters to fire explosive projectiles or give them extra damage against shields and turrets. One charged card reveals enemies through walls for a short time. These charged cards have a limited use, so refills must be purchased or collected from maps. Although there is good variety, the balance is not perfect. With so many powerful explosive cards, the encounters are short, but it deemphasizes the elegant blaster combat. Not necessarily a bad thing, but it can result in cluttered combat when more than a handful of soldiers are nearby.

There is a fourth slot, which is filled by collecting Powerups found around maps. These can be stronger than Star Cards, providing bonuses like a rocket launcher, orbital strike, droid ally or a deadly proximity mine. Powerups are the only way to enter most vehicles. Heroes (and Villains) are usually accessed via Powerups; you can play as one of six characters from the universe, including Darth Vader and Han Solo. These characters absorb heavy damage and can return quickly after death. It takes a concerted effort from dozens of regular soldiers to eliminate them, costing many lives. Although having a hero on your side is neat, and playing one is empowering, being continually killed by an enemy hero unit is frustrating. You cannot avoid them like you can vehicles and they can decimate groups of soldiers in tight spaces. Most Powerups are placed near spawn locations, so everybody will get a chance to use them. 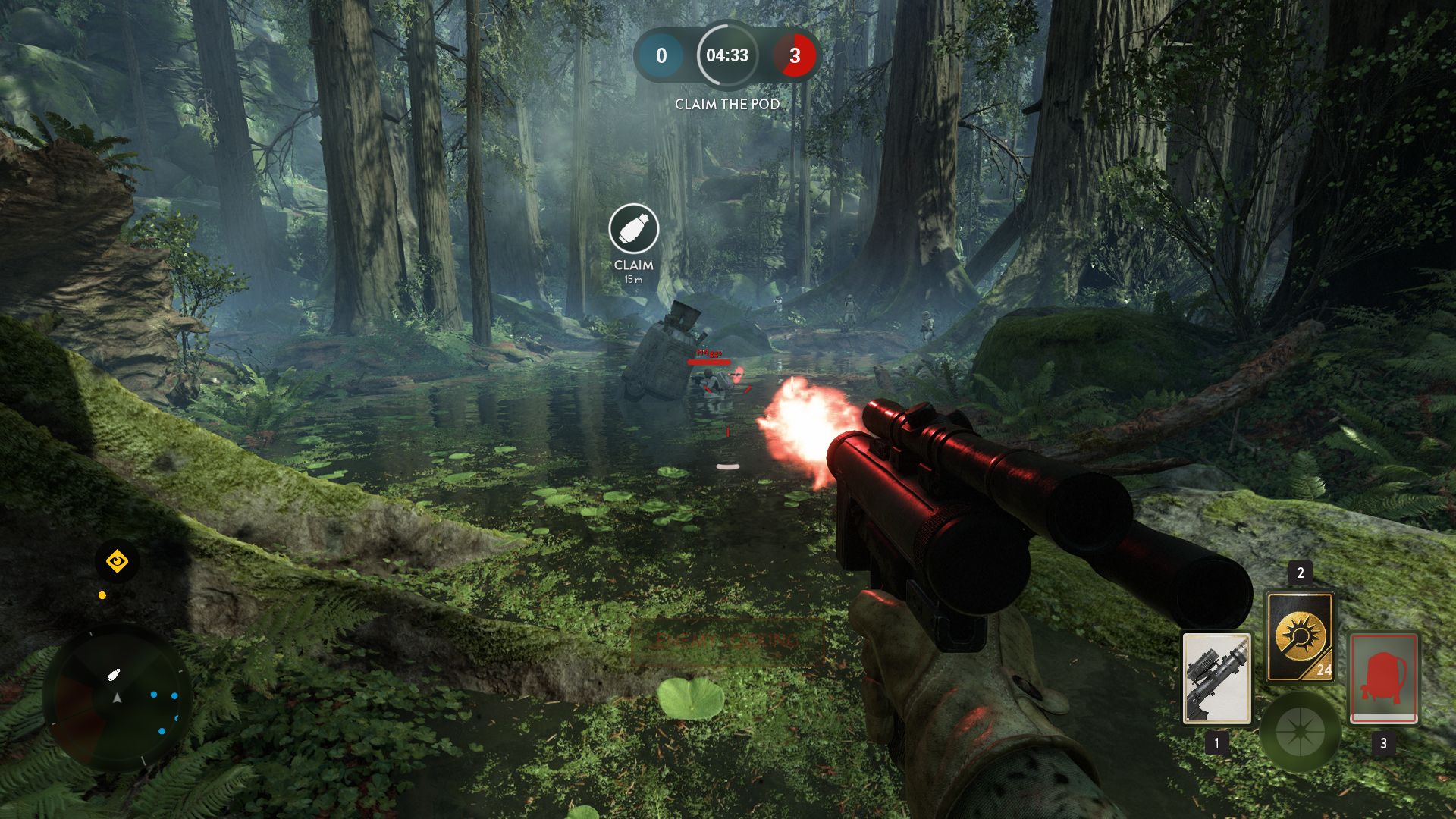 Powerups drop when the pod is captured in Drop Zone, here on beautiful Endor

Battlefront is packed with quite a few modes, from small infantry modes to large ones with vehicles. Fighter Squadron is the only mode sans ground combat, taking place in the sky with starfighters—think Flight Supremacy from Battlefield. If you ever wanted to pilot a TIE fighter and destroy Rebel scum, now is your best chance. It is quite accessible because of target-locking lasers, push-button evasive manoeuvres and fast kills. Unfortunately the mode lacks longevity partially because it has dozens of AI-controlled enemies that are pure fodder. It is little more than flying to the middle of the chaos and shooting the first thing that comes into range, occasionally weaving into a nearby canon to repair. While initially exciting, the only squadron element comes from hearing allies perish in battle or attacking their pursuers. It is also problematic when it comes to balance; the Empire won just once from dozens of games and the powerful Millennium Falcon typically survived the entire match. Fighter Squadron epitomizes Battlefront—spectacle over substance.

The main large game modes with ground combat are Supremacy and Walker assault, and both share the same maps with 20v20 player counts. These two modes, especially Walker Assault, have more cinematic moments than any of the other modes combined. They have vehicles, aircraft, capture points, hero units, turrets—almost everything that Battlefront offers. There are only four large maps (five with Jakku), and they are quite narrow albeit fairly long. Walker Assault is linear, with the massive Walkers trundling through canyons or riverbeds. At each stage Rebels activate defensive uplinks to damage the Empire’s Walker—it must be destroyed before the final point. But in Supremacy, the action is more like a futile tug of war as both teams retake one of two capture points and push enemies back, much like how it worked in Frontlines: Fuel of War. With the prevalence of powerful Hero units, vehicles and some dubious chokepoint design, it can mean soldiers contest for minutes without making progress. This stagnation brings fatigue and Supremacy might have worked better with ground soldiers only. Turning Point is another large mode, added with the first free DLC pack, and it functions like a hybrid of Walker Assault and Supremacy. This time Rebels are attacking via attrition and progress in a linear fashion, capturing one control point at each stage. Sadly it is only playable on one map. 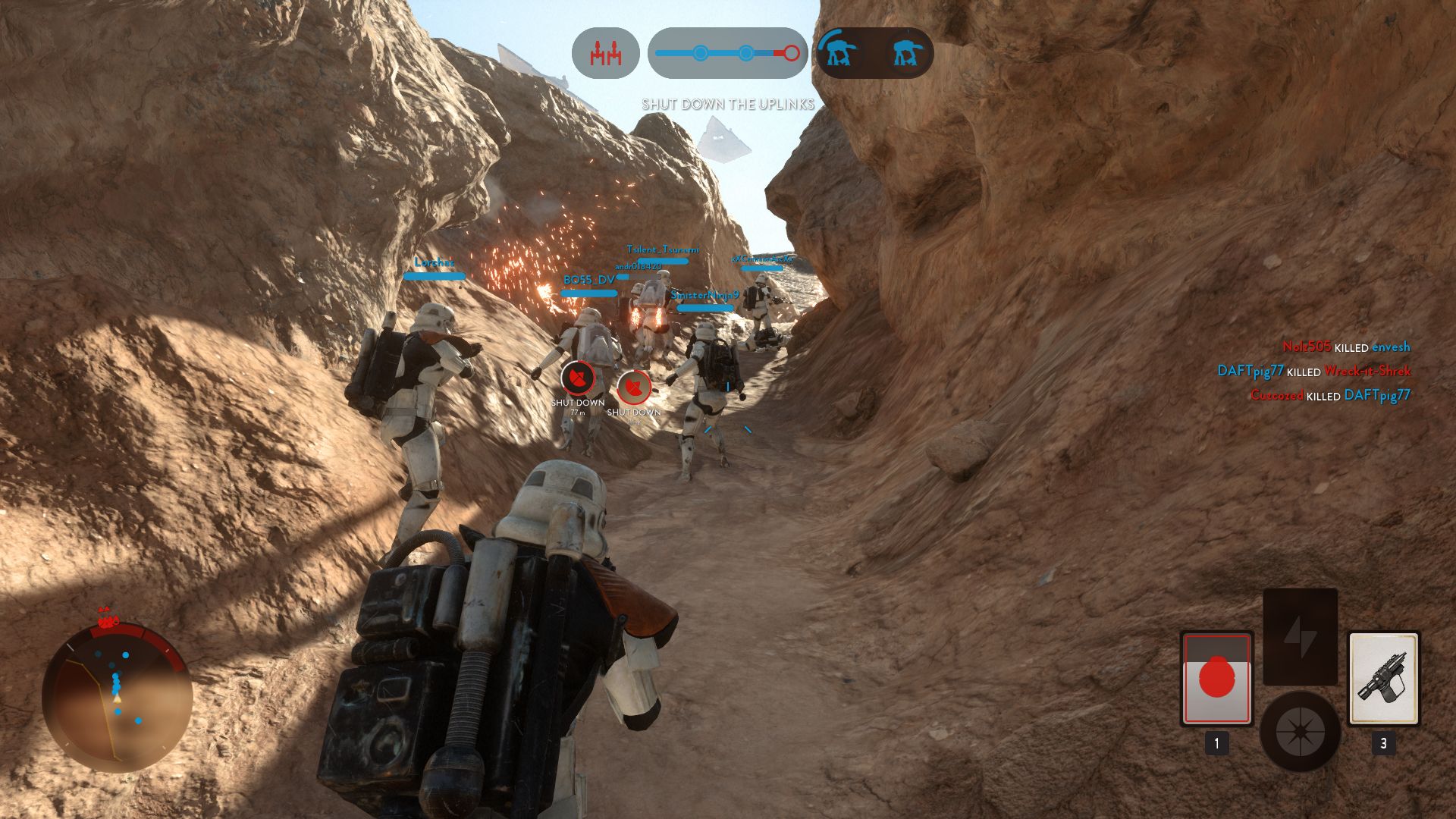 No Jump pack? Welcome to chokepoint city, population: too many

The general map structure in these large modes is poor. Narrow maps are not good at the best of times, but movement is restricted further by funnelling players down narrow corridors or through open canyons that lack cover. For the Rebels, Walker Assault is like shooting fish in a barrel unless an AT-ST or Villain pushes forward and camps a spawn point. Using a Jump Pack improves things, but the restrictive mission zones prevent too much flanking. Objectives are often found in cramped locations, which is annoying given the frequency of explosive devices. The similarly linear Jakku map has little in the way of structure—sand dunes and destroyed vehicles providing intermittent cover and plenty of cheap hiding spots. 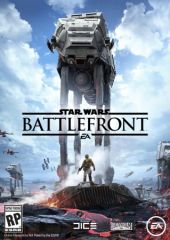