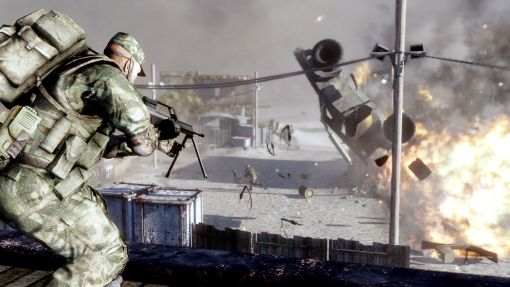 In terms of graphics, Bad Company 2 is looking great so far. Although it won’t be setting any new benchmarks for PS3 console graphics especially after this fall’s Uncharted 2: Among Thieves, BC2’s graphics are more than fitting of the current-gen standard and are quite impressive considering the epic scale of the battles taking place. Take a gander at the screenshots and feel free to make your own judgments, but keep in mind that these shots are taken from an early beta build of the game and that this is the worst the graphics will look with DICE possibly making some improvements before the game’s retail release. I’ve noticed very few graphical bugs in my time with the beta and those that I have encountered tend to be small, like a tree vanishing from a certain angle or the wreckage of a tank appearing to be an operational tank for a few moments too long before instantly making the transfer to a pile of scarred metal. 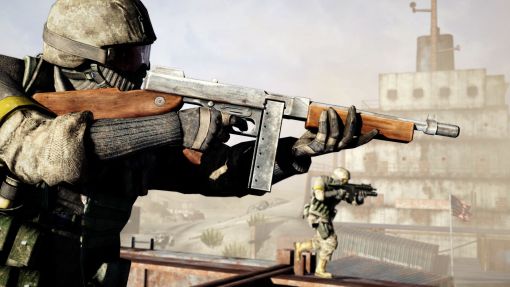 The audio is extremely well done and sounds great, even on basic television speakers. Weapon and action sounds match up well and sound realistic. Surround sound and directional balancing is great, allowing for someone running a simple stereo television set-up to detect incoming fire and enemies easily from the left or right side.
With the most important aspect being the gameplay, I must say that it outshines the first Bad Company by far and evolves the Battlefield-style of play that DICE delivered in 2006’s well received PC title Battlefield 2142. In the Rush game mode, the players are given a choice between 4 different classes each of which has over ten specific class unlocks that can be easily customized between spawns. The object of the game is for the attacking team to arm the charges on two objectives (large bombs placed within two buildings) while the defending team does all it can to keep the enemy at bay long enough to diminish their reinforcements. If the attackers are successful, the defenders are forced to fall back and a new portion of the massive map is unlocked with two new objectives for the teams to attack or defend respectively. This formula continues on until either the attacker’s reinforcements are extinguished by the opposing team’s strong defense or all of the objectives are destroyed. It is a fairly straight forward game mode and it works well with the game’s squad dynamics.
12Next