FIFA Manager is a football sim franchise that began all the way back in 2002, when it was called Total Club Manager. In 2005, the old name was changed, and with it came a re-branded image of the game. Developed by German studio Bright Future and published by EA Sports, the franchise has enjoyed a very strong following over the years and with FIFA Manager 10, tons of new improvements are introduced to the classic formula that made the series both fun and accessible to newcomers and old fans alike. If you are not a fan of stats-based games, FIFAM10 may not change your mind – though they try very hard to appeal to everyone with their good 3D match simulations and friendly user interface. If you’re a sim buff, you will still find the game very deep and engaging. It is fair to say that FIFAM10 succeeds in reaching both the hardcore and the amateur audiences of the genre, though it comes short of fully satisfying either crowd.

As with all Football management sims, if you wish to enjoy the game you need to be a fan of the sport. Looking at various stats, player injuries and similar dull numbers can be boring to some, but your imagination will have a really tough time getting involved with the game if you do not enjoy the sport. That being said, fans of football aren’t always gamers, but if you are, then you have likely already tried the demo for this and other management sims on the market. FIFA Manager 10 distinguishes itself from the competition by offering new players a lot to grab on to. The interface is easy to use – it takes time to adjust to it, but it is undoubtedly easier to navigate compared to the other titles in the genre. New this year is a total revamp in the looks department – almost all of the menu screens are now presented as if you are looking at your desk, or onto the pitch, or onto your cell phone. This is an interesting and simply darn cool interface to use. In addition, you can also customize your view by adding various objects to your desk such as your team’s scarf, sunglasses, plants, etc. These items locate themselves within view, but do not interfere with your widget windows located around the main interface. The game also finally supports full widescreen resolution, which allows for a lot of space on your desk. The implementation is not perfect, however – text starts getting a bit difficult to see at anything higher than 1680x1050, and if you choose to view your games in the 3D engine, the players and field looks stretched so the engine is obviously not up to par, but more on this later. The series’ usual “Assistant coaches” are back, allowing you to set the difficulty of the game and then delegate any tasks you do not wish to do, such as extending the stadium or signing new players, to be done automatically. The logic of the AI assistants seems to have improved this year, though there are still a few quirks that need ironing out. 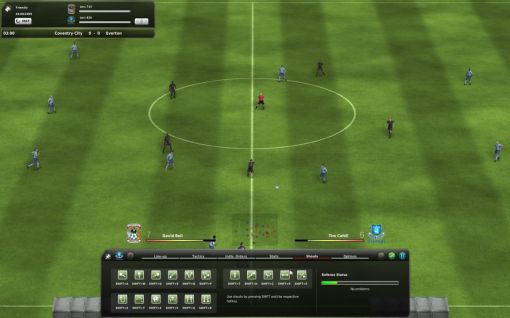 New Manager shouts add another dimension to the 3D match
If you are a dedicated sim fan, you will also have a great time with FIFAM10. With all assistants off and difficulty set to Hard or Veteran, you will definitely get a run for your money trying to manage your club to success. Players will be very demanding with their contracts, morale will be tough, and fans will use every chance they get to attempt and pressure you out of the office. It is not always realistic, but if you want a challenge, then you will find one here. One of the bigger additions to the realism of the game this year is the full cast of real coaches and managers have been added to the game. So now you may observe the coaching transfer market with a lot more interest compared to previous years, where fake names of coaching staff really did not matter to most players. Dedicated players will likely want to simulate all their matches in the game’s excellent 3D match engine - and they will be mostly satisfied. The game, as in previous years, uses the graphical engine of FIFA 10 which is actually rather unfortunate. As you may know, FIFA 10 on PC is still running on the old PlayStation 2 engine (which does not have the gameplay or the looks of the next-gen 360/PS3 title). This means that there are many quirks and very awkward goals scored, players making dumb decisions and things just looking outright funny at times. While it’s a great way to simulate your matches for the visual players, those who want realistic results may want to stick to the classic Text mode – which has been revamped and is now excellent. It is not the developer’s fault that the 3D engine is so lackluster at times – they are simply using the engine developed by EA Sports Canada. Not to worry though – as in previous years, Bright Future plans to release a number of patches for this year’s game in order to improve all modes of play and add new database updates.
12Next 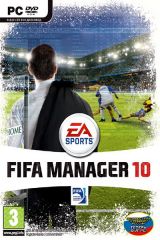 All videos for FIFA Manager 10 (1)
Advertisement ▼