NOT A HERO
Platform: PC
78
SummaryNewsArticlesVideoScreens

Not A Hero Review

Videogames often place players in the role of someone with a bigger purpose to serve or a heroic path to follow. That may mean rescuing hostages, fighting off bad guys or possibly sacrificing oneself, but it is all meant to serve the greater good. In Devolver Digital's Not a Hero however, as the name suggests, you don't necessarily take on the traditional hero persona. Rather your role is more closely associated with that of a political pawn piece for a ruthless politician. As time goes on it almost becomes difficult to decide who is worse, the numerous criminals you're shooting in the face, or yourself. 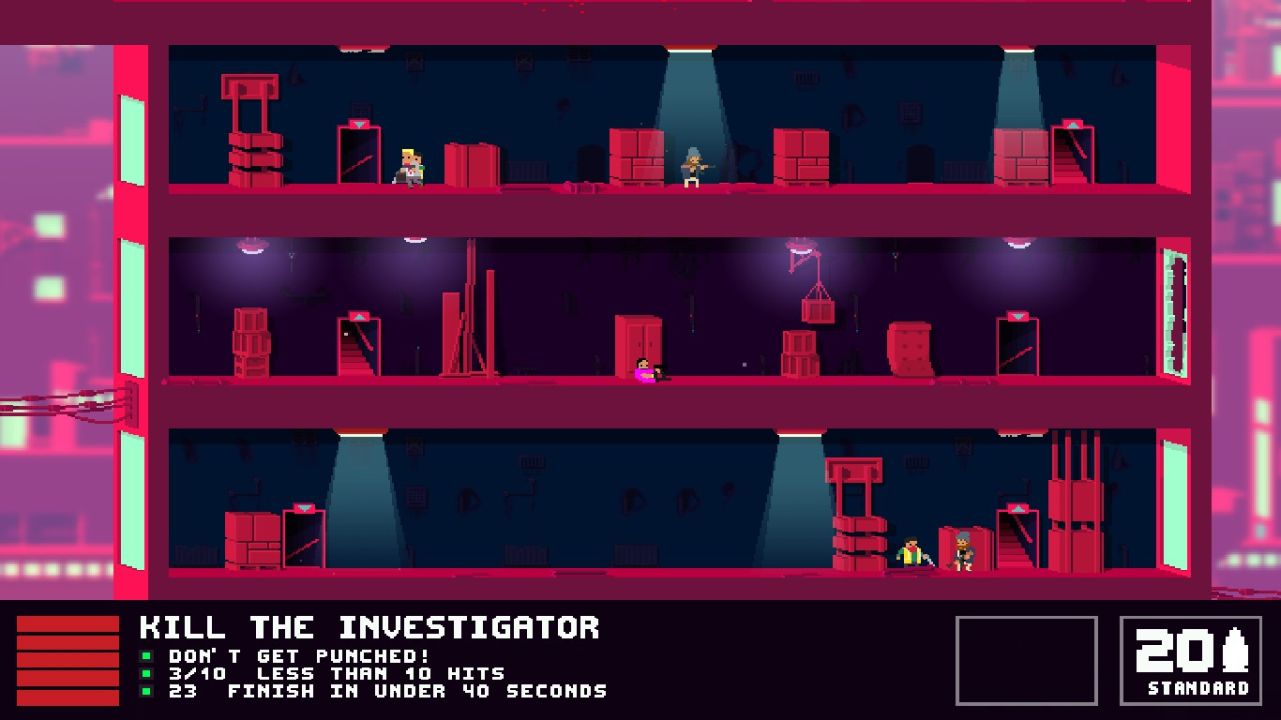 Not a Hero revolves around an anthropomorphic rabbit named BunnyLord, who has come back in time to win an election for Mayor in order to save the world. As one of the many members of BunnyLord's Fun Club, you aid him in raising his approval rating before election day by taking out three local gangs. Each of the game's 21 levels represents a day leading up to the election, and successfully completing your mission and the available side objectives further boost BunnyLord's approval rating.

Playing in a 2D side-scrolling perspective, Not a Hero is a very fast-paced and hectic cover-based shooter. Your primary form of movement is through sliding from cover to cover as you make your way through each floor of enemies. This whole ebb and flow of popping in and out of cover, taking potshots at enemies, and moving in for brutal executions feels great, aside for occasions of not snapping into cover and being left exposed. Those up close executions, by the way, are where the peak of the gore takes place and for a pixel-art game there is a whole lot of it. BunnyLord himself handles some of the most brutal scenes in the game and helps to paint the picture of how psychotic he is, for a politician at least.

Every level takes place inside of the same sort of building, but with a different generated layout. The most common differences you'll ever run into is either a change in the types of enemies you're fighting or additional floors and buildings during longer levels. Having that side-scrolling perspective gives the player the benefit of being able to see how many and what type of enemies are on the floors above and below them. So in this sense a bit a strategy is tacked on. The primary way of transitioning from floor to floor are the staircases, but in certain circumstances there are windows that you can leap out of and re-enter through in a floor below, therefore providing flanking opportunities. Mixing this re-entry technique with a special ability like sliding and shooting at the same time makes killing criminals an absolute blast. 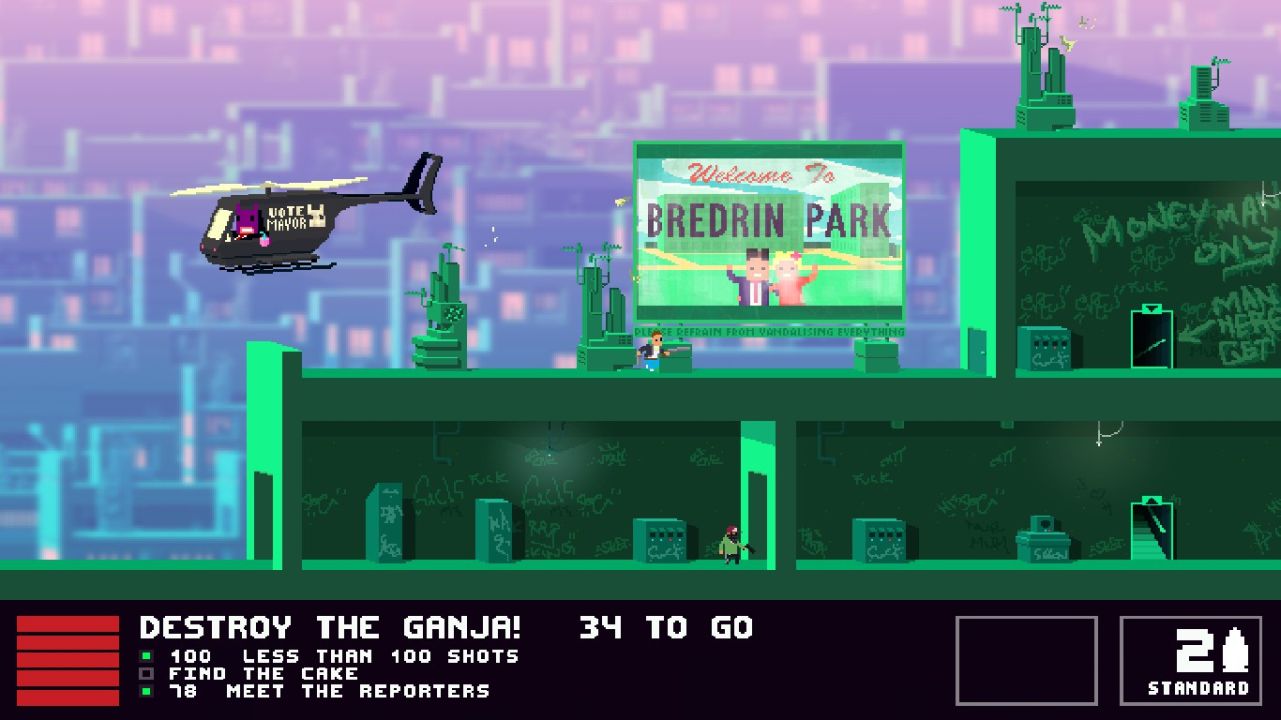 Not every character can pull that off, however. Steve, who can slide tackle enemies and quickly reload his weapon, is the only member of BunnyLord's Fun Club at the start. As BunnyLord's approval rating increases, new characters are unlocked, all with their strengths, weaknesses, and unique quirks. Some of these traits are useful, like Jesus' ability mentioned above of shooting while sliding, or Cletus' ability to shoot doors open. Other traits, however, serve no other purpose really than to provide humor and diversity. Mike, for example, has a twitchy little pixel eye and is noted to be a vegan. This is just a sample of the silliness that is common throughout the game.

The combat in Not a Hero starts off fairly easy but gets a pretty hefty difficulty spike towards the later parts of the game. Groups of enemies will begin to ambush you from both sides at any given time, forcing you to either outmaneuver or outgun them. In the last segment of the game, certain enemies deliver one-hit kills and are tricky to take down. Meanwhile, waves of SWAT teams continually pursue you in different levels, causing quite a nuisance when making your escape. The latter two obstacles give off more of a trial and error type of feel, and at times don't exactly feel fair. Since there are no checkpoints in the levels, it isn't uncommon to breeze through most of it, only to be caught completely off guard and having to start from the beginning.

Special weapons and ammunition are littered throughout each level to provide a sort of kickback against the rising difficulty of your foes. Fatboy and Nadeshot ammo provide some explosive firepower while the Laser and Drillshot completely obliterate whatever they hit. Your typical pickups like grenades, Molotovs, and turrets are especially helpful when dealing with large groups of enemies. 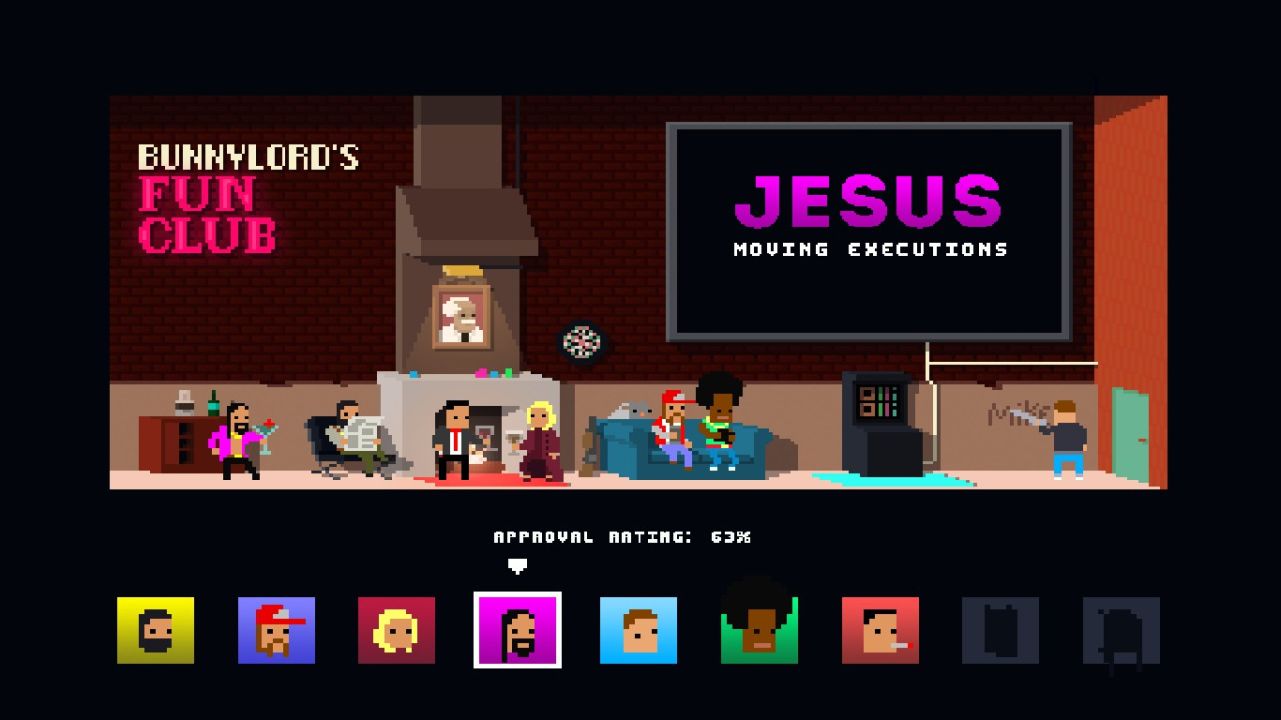 Next to its fast-paced maneuvering, Not a Hero's humor is the key staple to the game. BunnyLord is always a source of satirical dark humor, constantly criticizing everything and finding new ways to encourage the player to shoot criminals in the face. During most of his monologues, BunnyLord usually has some new prop to change things up a bit. One time he may be wearing night vision goggles while other times there may be a man who looks to have either been tortured or is straight up dead. Why are these random things here? For no reason, really, other than to provide another chance to cackle at the absurdity of it all.

That humor does only go so far after a while, however. Since much of BunnyLord's discussions are about completely random topics, it begins to feel like he is just incessantly rambling on for far too long. With the gameplay laid smack dab in the middle of it, you're sitting there reading the dialog for double the amount of time that you're playing. Maybe it wouldn't be so bad if it were relevant to an evolving story, but since it's more rambling than anything else, the humor runs dry, and rather creates and urge to get back into the gameplay.

Not a Hero is exactly as it sounds. You are not some incredibly brave and heroic person on an important journey, but rather a killing machine meant to help a psychotic politician become Mayor. But running and sliding through floors of enemies and blasting them away is still a great time, and the humor is good for a laugh. It's just a shame that there wasn't more of it to encourage the player to come back for more.

Our ratings for Not A Hero on PC out of 100 (Ratings FAQ)
Presentation
80
A pleasant pixel-art world that's in love with blood and gore. The soundtrack has some catchy tunes that mesh well with the flow of your movement, and each member of BunnyLord's Fun Club have their distinguishable characteristics.
Gameplay
85
Sliding through floors mowing down bad guys is a blast, especially when using some of the special ammunition and pickups. There are multiple unlockable characters to pick from, all with strengths and weaknesses that encourage playing the game in different ways.
Single Player
75
BunnyLord's opening monologue sets the scene, but there isn't much of a story following that. Each level has its self-contained scenario that BunnyLord describes, but eventually the dialog drags on for too long. Most players should be able to play through Not a Hero's 21 levels in a few hours, with the only real reason to return being to complete each level's side objectives.
Multiplayer
NR
None
Performance
83
Aside from a few moments of stuttering and drops in framerate, Not a Hero chugs along smoothly, offering little interference with your goal of shooting baddies in the face.
Overall
78
Not a Hero is silly bloodbath whose gameplay and humor are best enjoyed in small doses. Sliding from floor to floor is a ton of fun, but, unfortunately, the entire game can be played through in a fairly short time. 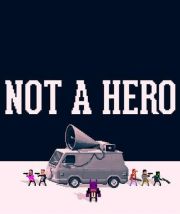