Well paced and well priced, though technical snafus and the undead hold it back

I can’t help but feel a warm fuzzy feeling when a proper, old-school expansion like The Old Blood comes out. No seasons pass, no piecemeal drip-feed of a story broken into fragments and released months apart. Just a good old fashioned self-contained singleplayer experience with more than enough meat on its bones to justify the price tag and leave you feeling like you played something substantial. While The Old Blood isn’t an entirely successful add-on to last year’s entertaining The New Order due to some technical issues and a couple of weaker levels in the second half, overall the pacing is tighter than the base game and the core action remains highly enjoyable. 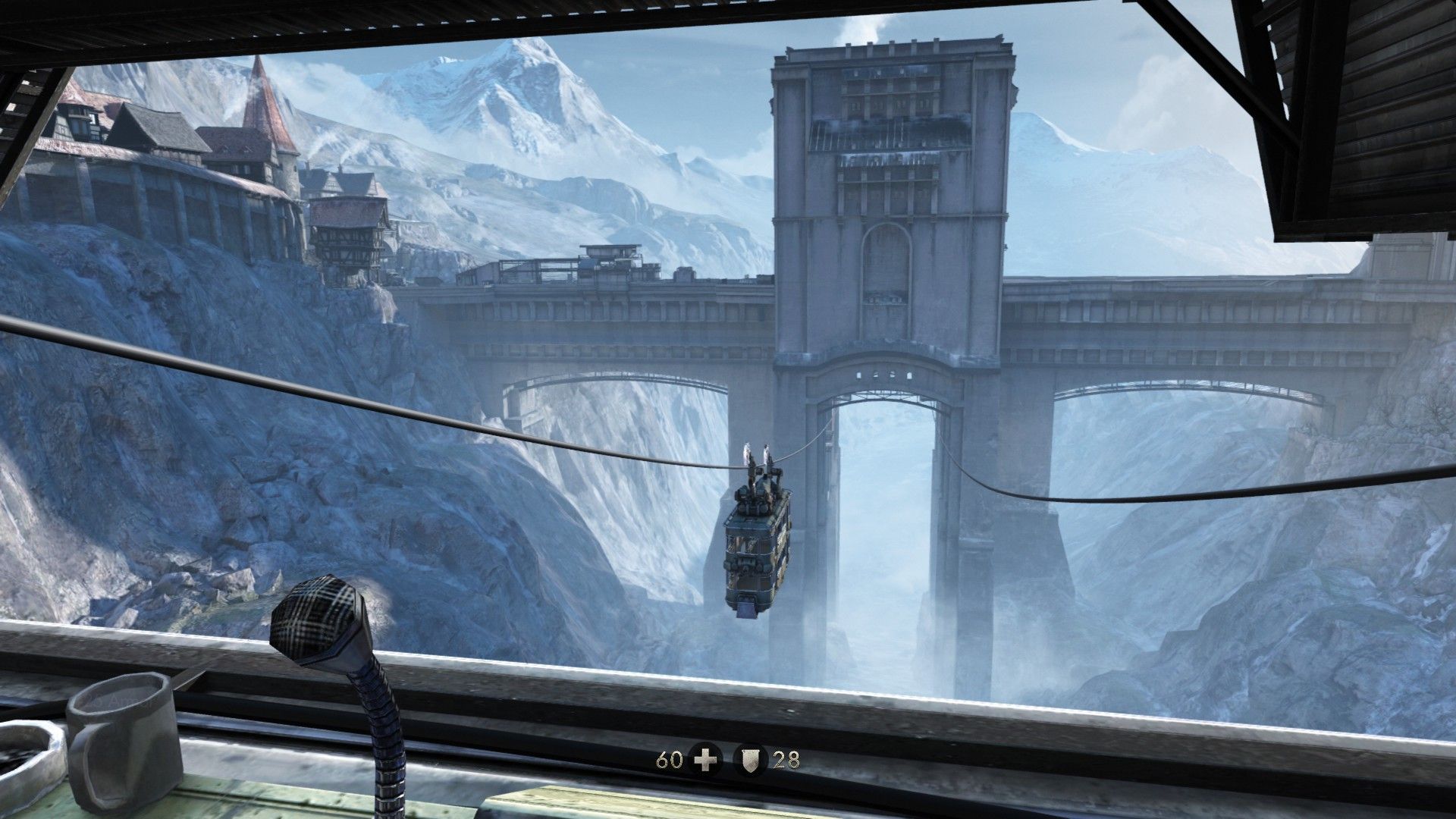 While the narrative of The New Order was a very prominent part of the experience, it takes more of a backseat to the action and gameplay in this expansion. The Old Blood acts as a prequel to TNO, with BJ infiltrating Castle Wolfenstein to investigate the activities of a German Officer named Helga. While the dramatic villains that proved so entertaining in the base game are still around, cutscenes are relegated to very brief first-person interludes between chapters. The entire 5-6 hour game is experienced from BJ’s perspective, with story moments kept to a minimum and action setpieces often coming one after the other with minimal downtime.

After a bombastic prologue, you are thrown into a stealth level that serves up some interesting gameplay mechanics and narrative context. The Nazis have started producing early versions of the heavily armored super soldiers you fight in TNO, but their suits must be hooked up to electrified rails that limit their range of movement. The rails are attached to generators which you can temporarily shut off, giving you a window to detach the suit from the rail and remove the threat. This proves a compelling opening to what turns out to be the stronger half of The Old Blood, which sees BJ blasting/sneaking his way through the castle.

Many areas are structured in such a way that you can choose to approach them stealthily or guns blazing. The officers who can be killed to prevent them calling in reinforcements return, and while the option to go through a level in several different ways is appreciated, the stealth mechanics remain underdeveloped. The AI don’t seem to react to dead bodies, but somehow every enemy in a level will be alerted if you take two silent pistol shots to down a Nazi instead of one even if he doesn’t yell out. Creeping around the detailed environments is enjoyable, but the game feels best when the lead is flying. 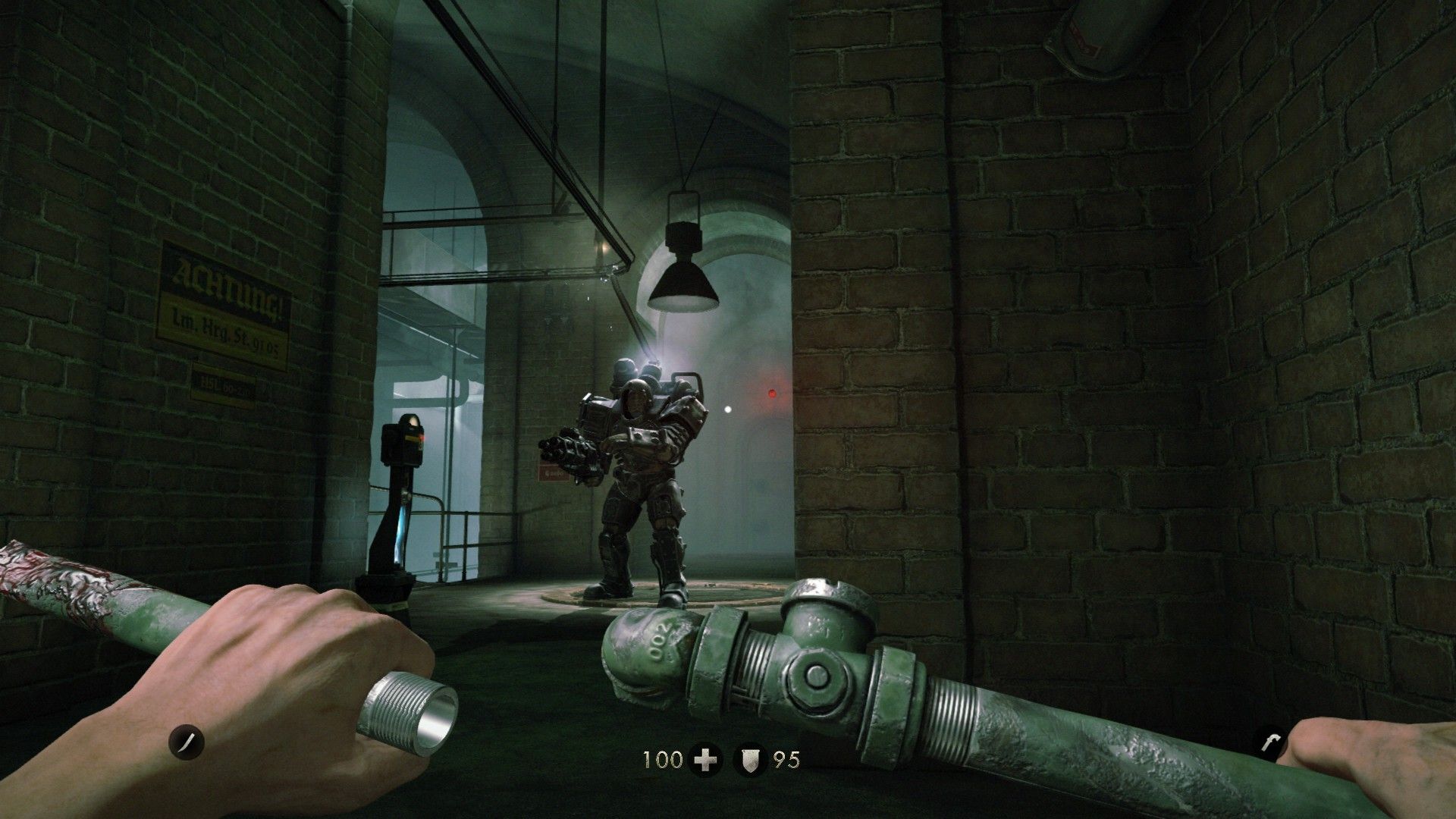 Supersoldiers On Rails are best avoided

The meaty gunplay that made the firefights so enjoyable in The New Order is as good as ever, but the weapon selection is overall more interesting. You start out with the standard pistol and assault rifle, but quickly find a satisfying bolt-action rifle, automatic shotgun and single-shot grenade launcher that are all immensely fun to use. You gain access to almost all of the weapons in the first couple of chapters, meaning you have an impressive arsenal at your disposal for much of the game.

One mechanic that has not returned from The New Order is the welding tool. Instead, you obtain a two-piece pipe early on that you will use in a seemingly endless number of ways. You will use the pipe segments to open doors, climb walls, push buttons and kill Nazis. The pipe segments and their many uses are a less fiddly mechanic than the welder in the base game, and also provide some comic relief as BJ finds endless new ways to make use of a seemingly mundane object.

Once you blast, stab and pipe your way through Castle Wolfenstein, you will move to a village that will serve as the setting for the game’s more visually interesting but ultimately weaker half. Two of the four latter chapters are spent fighting almost exclusively Nazi Zombies, which simply don’t pose much of a threat. Using your powerful firearms on these squishy foes is initially satisfying, but becomes tedious after a while, especially given the amount of enemy variety found in the regular Nazi army. Things pick up for the last level however and the game finishes strong, though it’s a shame an hour of the experience is not up to snuff with the rest. 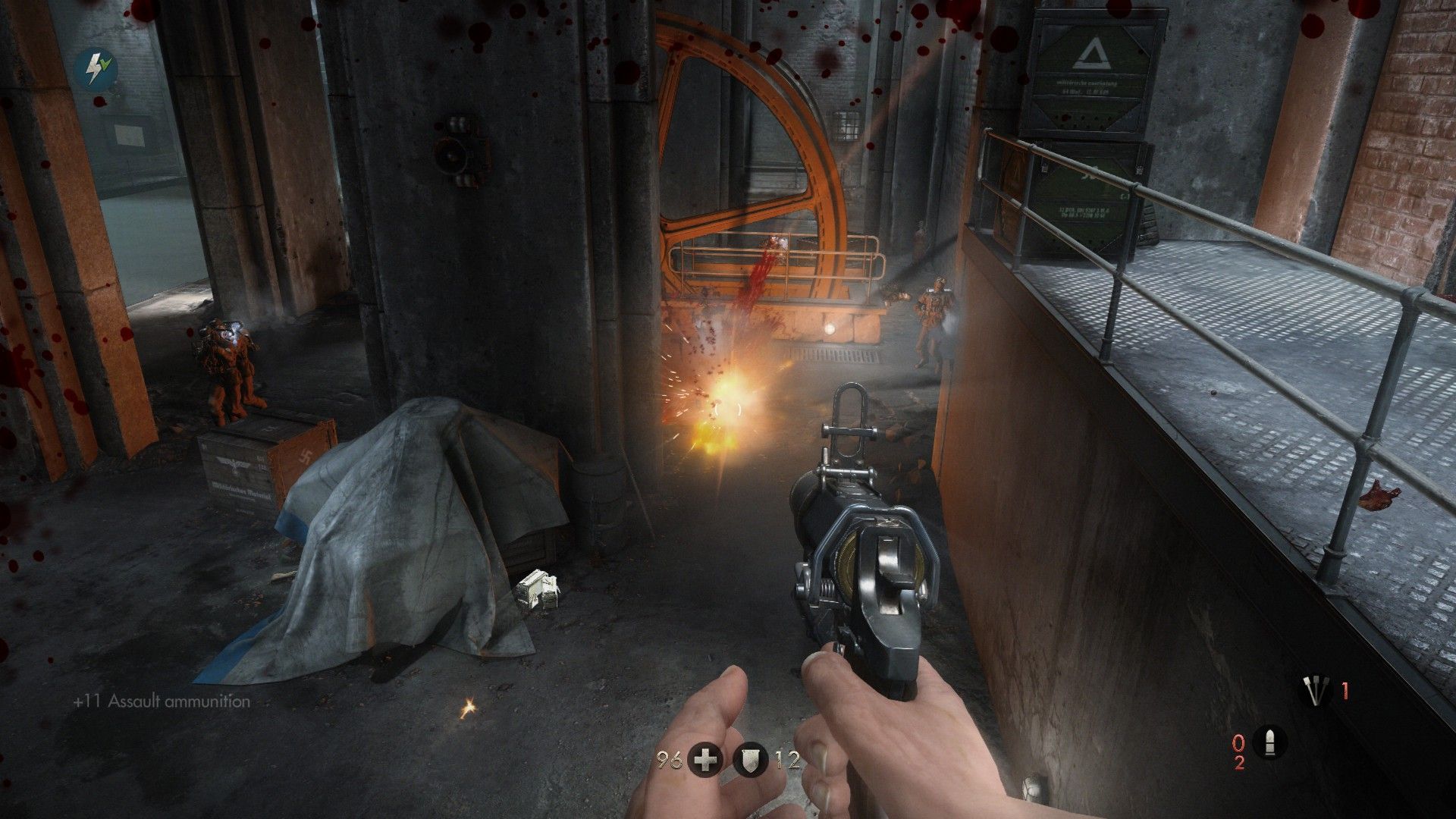 As you progress through the campaign in The Old Blood, you unlock challenge levels which are essentially chunks of existing chapters that can be played in isolation with a timer and score. These challenge maps are enjoyable ways to jump in for some quick action, although the enemy placement and level design seems to be unchanged from the normal campaign. However given the already substantial length of the singleplayer experience these challenge levels feel like an added bonus rather than a core feature.

One gameplay element that still disrupts the flow of gameplay is the way in which health, ammo and armour are collected. You need to manually run up to every item you want to collect and press E, which can become a pain when ammo, armour and health are scattered around in tiny quantities. Looking in every nook and cranny for pickups is fiddly and unenjoyable, however exploration does reveal other hidden secrets and Easter Eggs referencing past Wolfenstein games and other Bethesda titles. As you play you will also unlock upgrades, but the details of these are not well explained. I only knew I was receiving them because of achievement notifications, and their effects were often so minor that I probably wouldn’t have noticed otherwise. More clarification on how the upgrade system works would have been appreciated.

Another issue returning from The New Order is the generally disappointing engine it runs on. Textures pop in if you turn around too quickly, and enemy ragdolls behave in strange ways or sometimes become frozen in place, leaving dead bodies standing like scarecrows after some battles. I also experienced a frustrating bug where BJ was unable to climb a ladder, although reloading my last save resolved this issue. 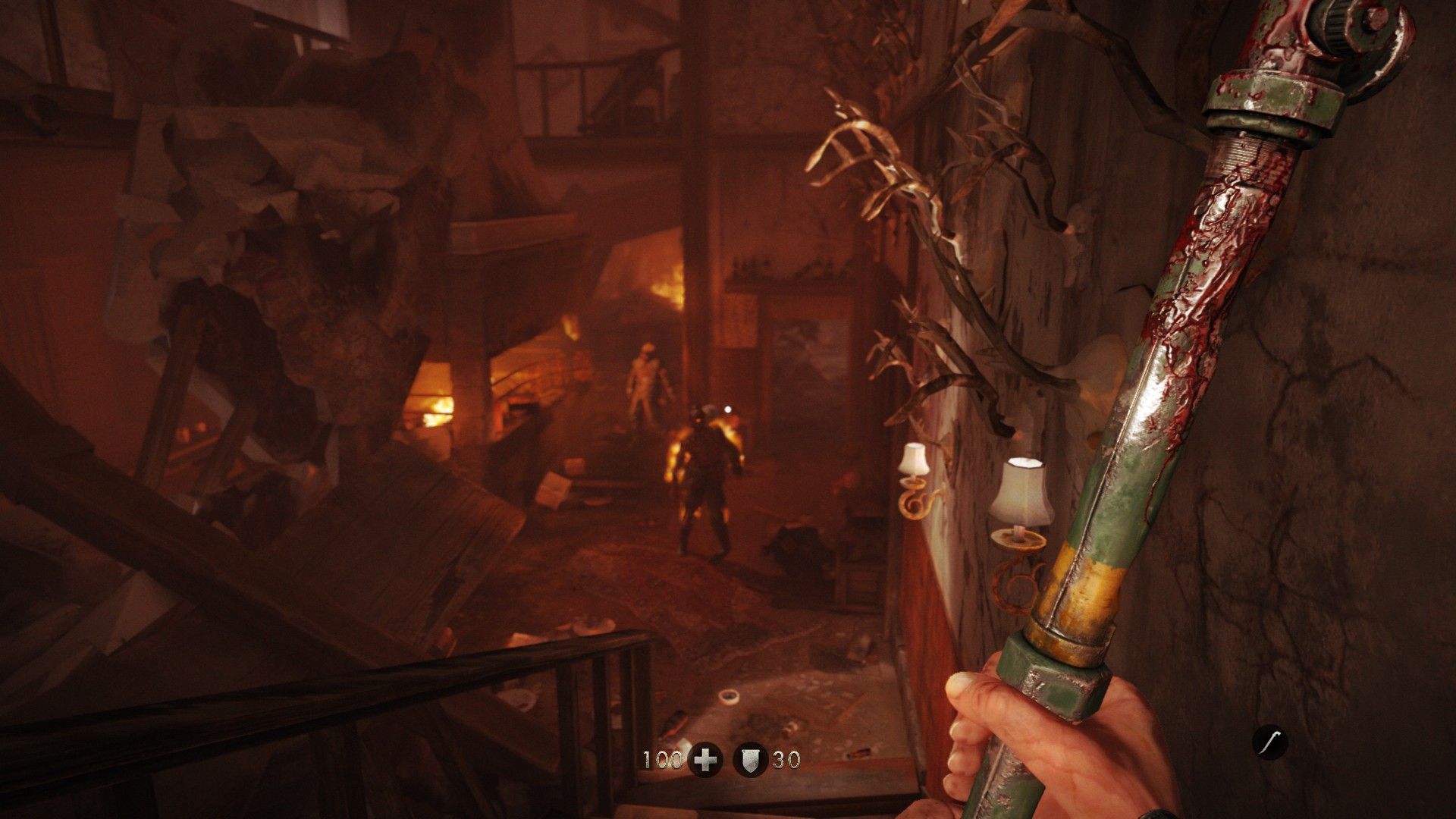 The Best of Modern Gaming: Depth of Field effects and Nazi Zombies

Unsurprisingly the game looks and runs much like The New Order did, although some of the levels contained within The Old Blood are the most visually interesting out of the two thanks to vivid lighting and strong art direction. Voice acting and sound design is up to the same standard as the base game, although a new score has been composed for the expansion and it is quite good, with the use of stringed instruments during the zombie levels being particularly appropriate.

All in all, The Old Blood provides a meatier singleplayer experience than what is present in many full priced games these days. Long time fans of the series will appreciate the familiar setting of Castle Wolfenstein, and those who grew impatient with the story-heavy sections of The New Order will be pleased with the tighter pacing and more intense action sequences found here. Twenty dollars seems like a very fair price given the quality of the experience, and I wouldn’t hesitate to recommend this expansion to anyone who enjoyed The New Order or singleplayer shooters in general.

70
The game runs fairly smoothly apart from infrequent stuttering and texture streaming problems.
Overall
75
The New Blood is a highly enjoyable old-school expansion that is slightly brought down by a weaker second half and some minor technical issues. 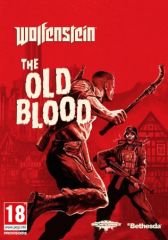 All videos for Wolfenstein: The Old Blood (2)
Advertisement ▼