While very few games are as unrelentingly violent as the Hotline Miami series, there are even fewer that show violence in such an ugly, disturbing light. With this long awaited sequel, the developers have once again managed to marry the visuals, music and storyline in such a way that you will relish brutally slaughtering hundreds of enemies while also feeling unsettled about who you are killing and why. This sense, that what you are doing might be horribly wrong, is what makes this series stand out in a medium filled with unsubstantiated gore and dismemberment. And it also makes the fact that Hotline Miami 2 is maimed by bugs, questionable design choices and extreme difficulty spikes, such an absolute tragedy. 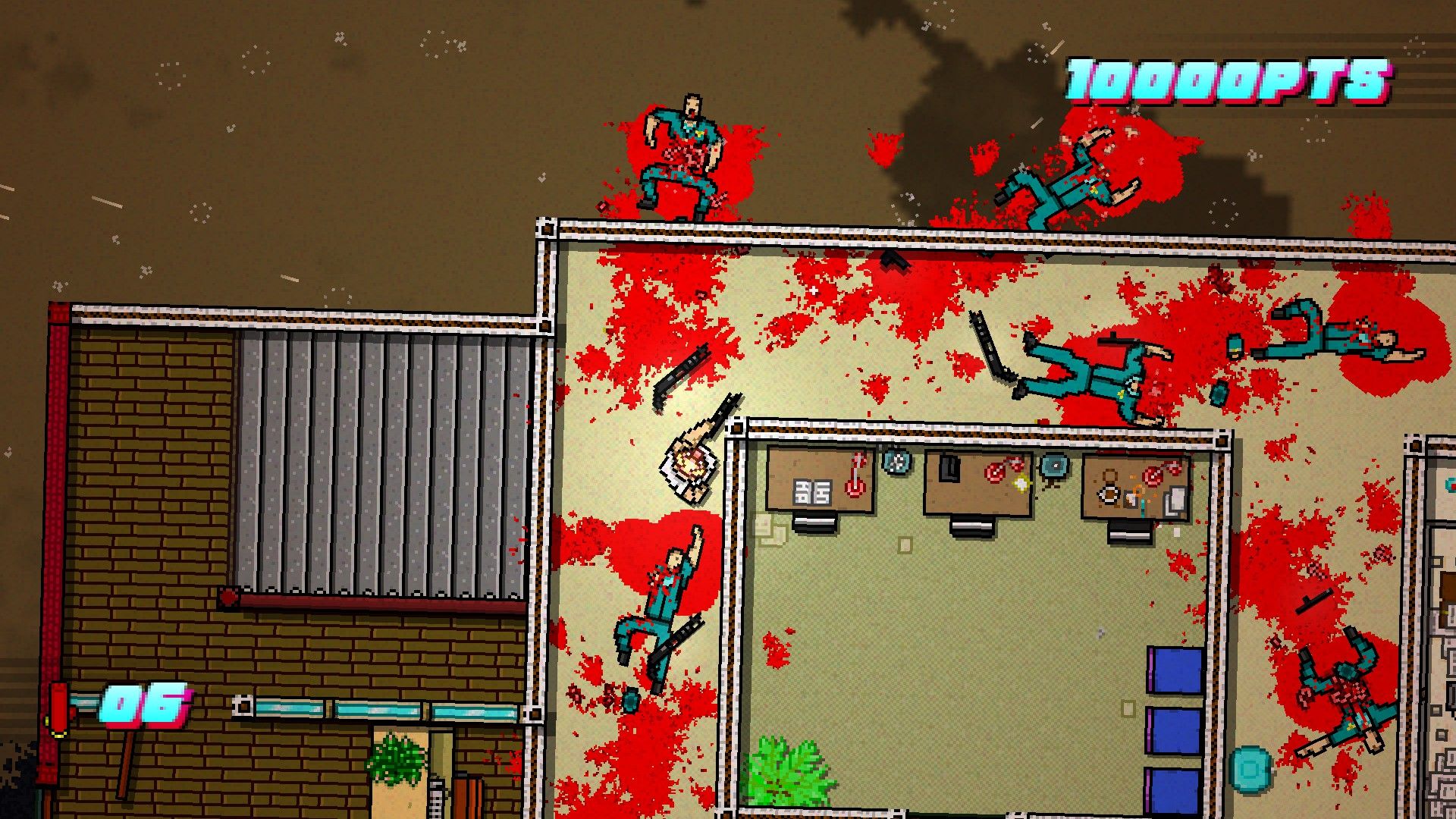 The primary way Wrong Number differentiates itself from its predecessor is the way its story is structured. While the first game saw you playing as a single psychopath who wore a variety of masks while going on a series of murderous rampages, the sequel jumps around between several characters, all of whom play a bit differently. The disparate storylines are of mixed success, with the creepy production of a disturbing film being the most interesting and the antics of a deranged angry veteran being the weakest. These different storylines play out over a much longer experience than the first game, and while this means you get a lot more playtime for your money, the 8+ hour run time and ever increasing difficulty mean the energy and momentum that characterizes Hotline Miami begins to falter out starting at about the half way mark.

Another impact that the many narrative threads have on Wrong Number is related to the gameplay. Depending on the storyline, you do not get to choose a mask to determine your play style; instead you are forced to play a certain way based on the character you are controlling. Some of these characters simply have standard abilities, such as the pig-mask wearing actor and the police detective. These levels are generally enjoyable thanks to the solid core action that Hotline Miami has on offer.

However, other characters force you to play in a very specific way, and this is not always to the game’s benefit. For some missions you play as a soldier in a war zone, and these mostly work since you are forced to conserve ammo, determine the location of ammo refill stations and switch between a firearm and a melee weapon. These missions put a twist on the core mechanics that at least work, but force you to play in a specific way which undermines the flexibility of Hotline Miami’s core gameplay design. The missions also feel somewhat contrived as you can only refill a small amount of ammo at a time from boxes and must exhaust your current ammo supply before refilling. 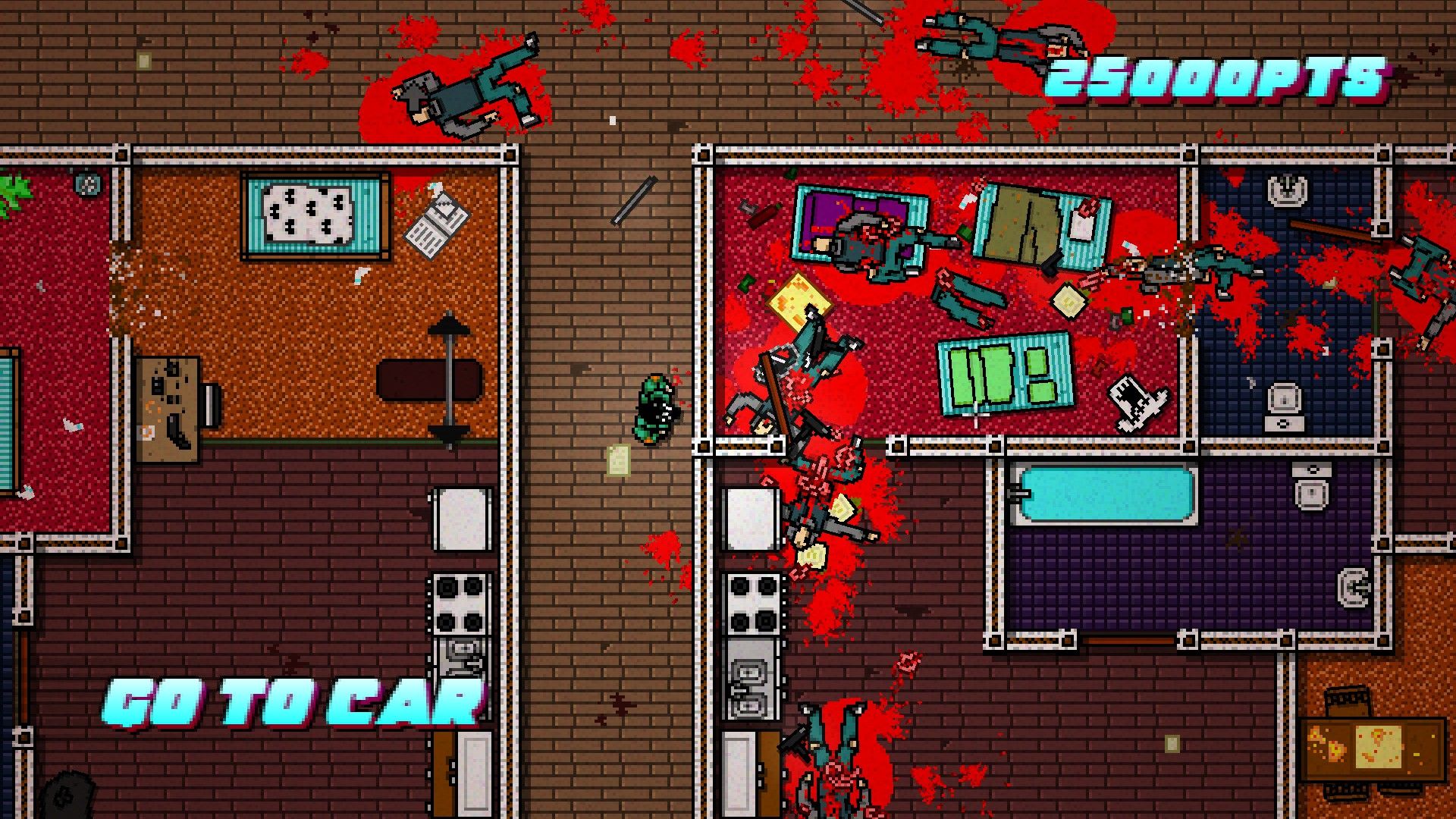 Missions where you play as a writer are even less successful; you cannot use any firearms, picking up a gun will see your character disarm it in a brief animation. This is done for narrative reasons but it has adverse effects on the gameplay; if you are trying to pick up a melee weapon from a pile that includes a firearm, you might accidentally pick up the firearm and disarm it, leaving you totally exposed to the enemy. Given how important split-second actions and reactions are in this game, these brief moments of vulnerability will often lead to your untimely death.

Other sets of missions do let you choose between a small selection of masks/characters which impact the gameplay. One character can choose from a series of masks, which provide useful bonuses to your character like lethal throws or starting with a nail gun which reminded me of why this model worked so well in the first game. The other set of four characters who are copy-cats of the original game’s protagonist reveal greater differences amongst them, but several are poorly thought out. The first character you unlock can dodge-roll, which seems useful in theory, but since the action is mapped to the same button as the finishing move, you will find yourself performing spectacular dodge-rolls into a room full of gun-wielding enemies instead of performing the finishing move you intended.

Another character is actually two characters, one of whom wields a chainsaw while their sibling provides cover with a firearm. If the melee sibling is performing a finishing move, the other character can still shoot enemies. This sounds incredibly cool on paper, but proves horribly clunky and unintuitive in practice. You only directly control the melee character, while the sibling with the firearm follows along, often standing in locations where they do not have a clear line of sight on a target the character you are directly controlling does, a tendency that proves profoundly annoying when exact positioning is often the difference between life and death. The other two characters in this cohort are more successful, although one is melee-only and will cater to a very specific playstyle; most will probably end up sticking with the dual machine-gun toting bear, again undermining the flexibility of the gameplay. 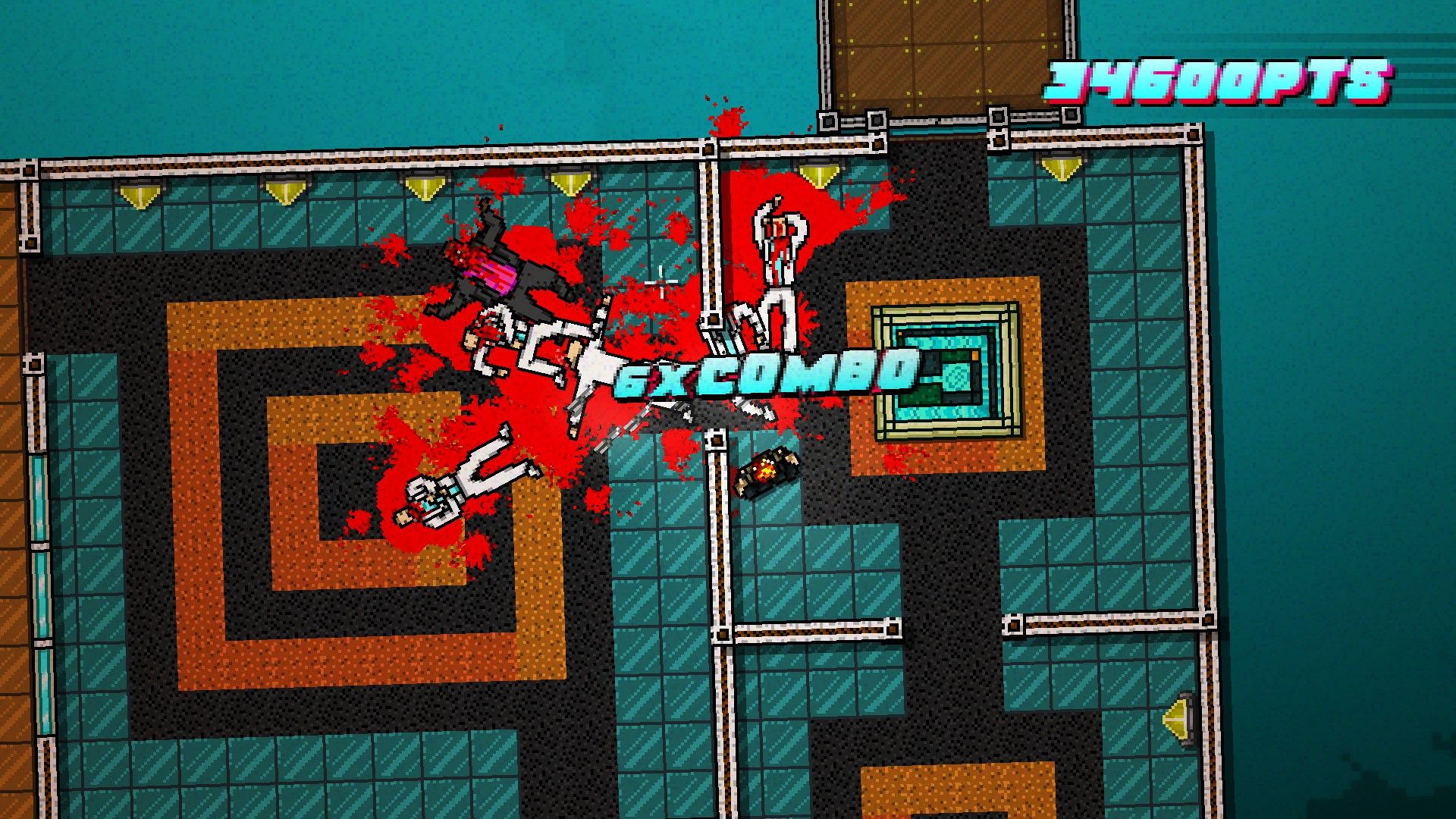 Further compounding the issues of these questionable design choices are the longer, more challenging levels and wide variety of bugs and glitches that crop up with alarming regularity. The levels in Wrong Number are on average much larger than those in 1, meaning you cannot scan the entirety of the level using the vision-extending shift key. These larger levels are often populated with far more enemies than you saw in the first game, and are filled with windows that mean you will frequently be killed from enemies you could not see, even when scanning with the shift key. The large, open levels lead to an increased reliance on firearms which can lead to slower, more careful play and less of the gleeful murder sprees that you might associate with the first game.

While you respawn at the beginning of each level/floor in a mission when you die, if you restart the game, you must start again from the beginning of the mission. Starting around the end of the third act, some of the missions become very long and difficult, taking the better part of an hour to complete. There were a few times when I got to the final floor and found myself beyond frustrated, with every part of me waning to quit the game, but the fact that I would have to restart the entire mission forced me to keep going; such experiences were not at all enjoyable.

While skilled players probably won’t have as much of an issue with the difficulty in Wrong Number, the bugs and glitches benefit no one. Enemies getting stuck in doors, dogs spinning in place and bullets going through people are bugs I witnessed just about every time I played. Another time, my cursor became restricted to the bottom half of the screen, meaning I couldn’t aim at anyone further away with any accuracy. More egregious were the times I got stuck in the terrain and had to restart entire missions. One time I finished a torturous hour-long mission and got stuck in a wall while returning to the car, meaning I had to replay the whole thing from the start. Given the long development cycle and the fact that Wrong Number is a top-down, 2D action game with heavily pixelated graphics and it is hard to forgive these kinds of technical shortcomings. 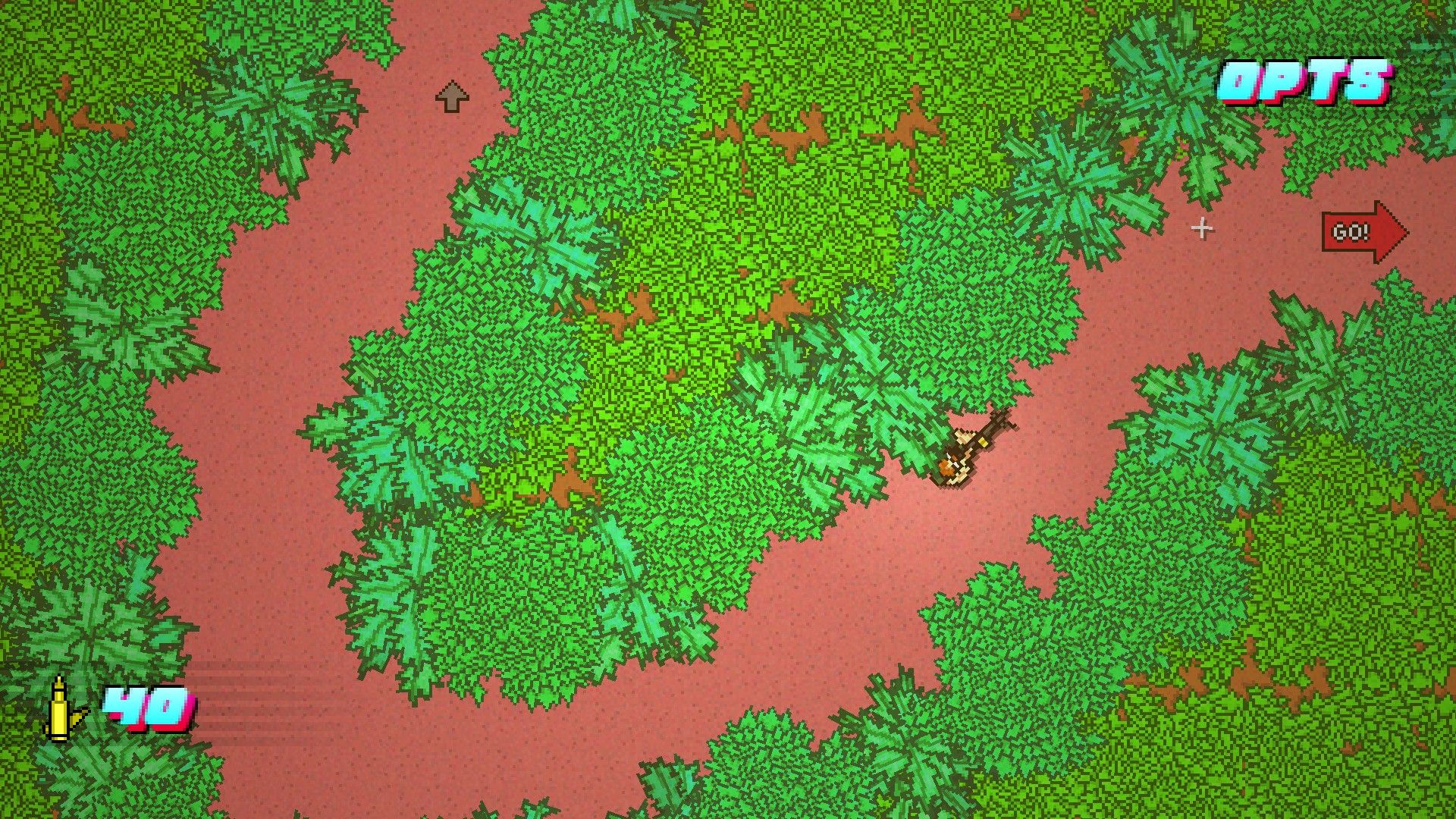 Despite these many failings, Hotline Miami 2 does improve on the original game in some ways. The incredibly frustrating boss fights have been removed, replaced by mini-bosses with unique behaviours that mingle with regular enemies during some levels. Enemy variety has been improved, adding more variables into the mix when figuring out how to get through a level, meaning you can’t rely on quick reflexes alone. Weapon variety has also been expanded, with silenced firearms being my favorite additions, although the melee weapons all still function in more or less the same way.

And of course, this being a Hotline Miami game, the incredibly strong glue that holds this mess together is the absolutely stellar soundtrack. The electronic score manipulates the tone of the game effortlessly, providing energetic momentum in some places and disturbing atmosphere in others. The music will get stuck in your head, causing you to think about the game when you aren’t playing it, letting the violence and music get under your skin, goading you to come back and have another go at that level you thought was unbeatable. The visuals haven’t changed from Hotline Miami 1, but the music in general is more somber in tone, lending the sequel some gravitas that makes the brutal killings all that much harder to swallow from a psychological standpoint.

This intoxicating blend of electronic music, dark storylines and ridiculously brutal violence give Wrong Number a strong identity, and a sense of deranged style that goes unmatched by anything put out by a major publisher in recent memory. This is why it pains me so deeply that Hotline Miami 2 is mechanically a very flawed game, especially when compared to its much tighter predecessor (boss fights aside). For those willing to look past the restrictive design choices, masochistic difficulty spikes and near game-breaking bugs, Wrong Number will surely prove a great purchase for fifteen dollars, but I cannot personally recommend it due to the problems outlined above. The soundtrack on the other hand, that is something anyone who likes electronic music should look into.

Our ratings for Hotline Miami 2: Wrong Number on PC out of 100 (Ratings FAQ)
Presentation
90
Wrong Number oozes style, from the truly phenomenal soundtrack to the psychedelic colours and VCR-inspired pause menu.
Gameplay
40
Overly large levels will cause lots of deaths from enemies you cannot see, gameplay is often inflexible due to limited character selection; frequent and intrusive bugs are the final nail in the coke-filled coffin.
Single Player
70
Much longer than the first game with a series of story threads that vary in quality from poignant to pointless.
Multiplayer
NR
None
Performance
(Show PC Specs)
CPU: Intel i5-2500k @ 3.3ghz
GPU: EVGA GTX 670 FTW 2GB
RAM: 8GB DDR3
OS: Windows 7 Ultimate 64 bit

50
The frame rate is smooth and the game never crashed, however myriad bugs and glitches proved very intrusive and forced me to replay large sections of the game.
Overall
61
Only saved by its incredible style and often intriguing storylines, Hotline Miami 2 is riddled with poor design choices, gameplay issues and various bugs and glitches. 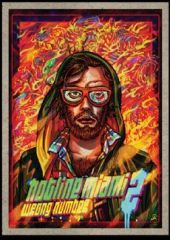