A sports game for the new social era

#IDARB (also known as “It Draws A Red Box”) is the latest game to release under the ID@Xbox program, letting small developers share the spotlight with bigger games on Xbox One. Part sports game, part platformer, and part social media experiment, the title was designed primarily via crowdsourcing public ideas. The end result is a multiplayer-only game that's briefly entertaining, but short on staying power due to lack of gameplay variety and odd multiplayer design. 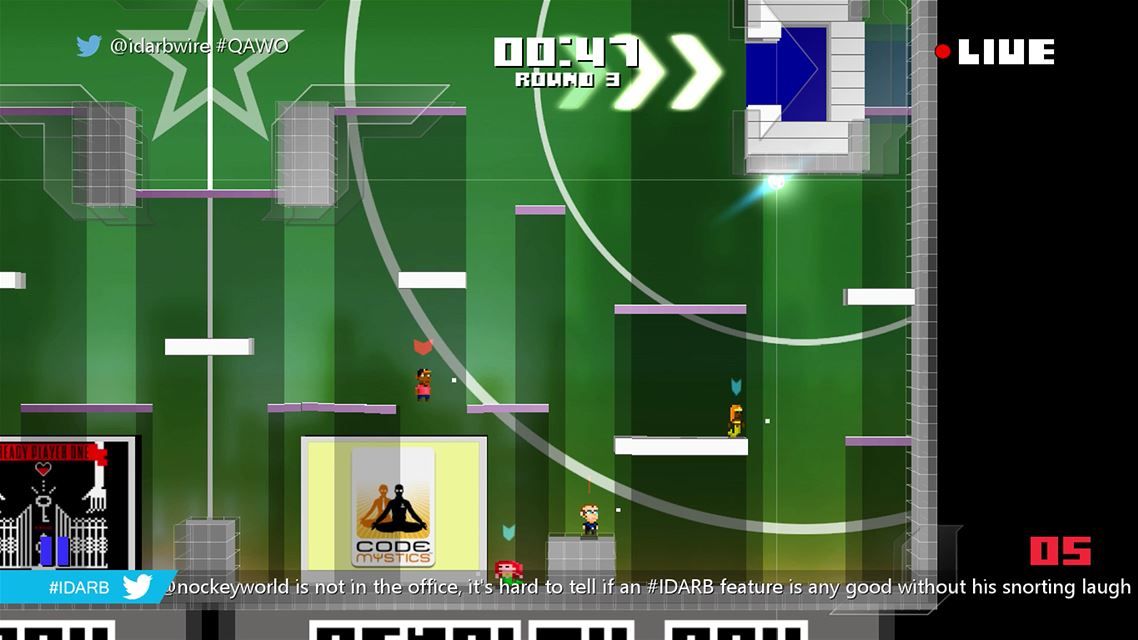 The game plays something like a sport. You've got two teams, a set of goals, and a ball. The way to win, of course, is to put the ball into the opposition netting, across four 90 second rounds. After completing a brief single player mode (a few matches against the CPU with increasing difficulty), you should get a hang of the controls. Shooting requires timing and precision, with the left stick being used to control the character and aim. Being off even by a little will cause the ball to hit the barriers and bounce back into play, usually much closer to your defending opponent. Points are awarded not just for scoring, but for execution. Getting a goal from a distance dictates how many points it's actually worth, and performing tricks or bouncing the ball off a surface act as score multipliers. Passing the ball between teammates before scoring also boosts this multiplier.

On defence, the priorities change. You can now tackle the ball carrier when he is within range, knocking the ball out of their grasp. You can also perform a charge attack and a jump that stuns, thus the game becomes much more about luck, aggressive behaviour and almost button mashing, in contrast to the accuracy and patience demanded on attack.

I did mention that the game is a platformer as well, and that's because in addition to the general chaos of a hotly contested match, the 2D stages feature many platforms. Some can be stood on, while others cannot, which throws an additional level of challenge to the proceedings. However, the platforms are always the same, thus reducing the potential for random events once you've had a chance to play on the map a few times. Also, you're always going to be playing from the same end for the whole match, thus potentially taking away from a higher level of challenge. 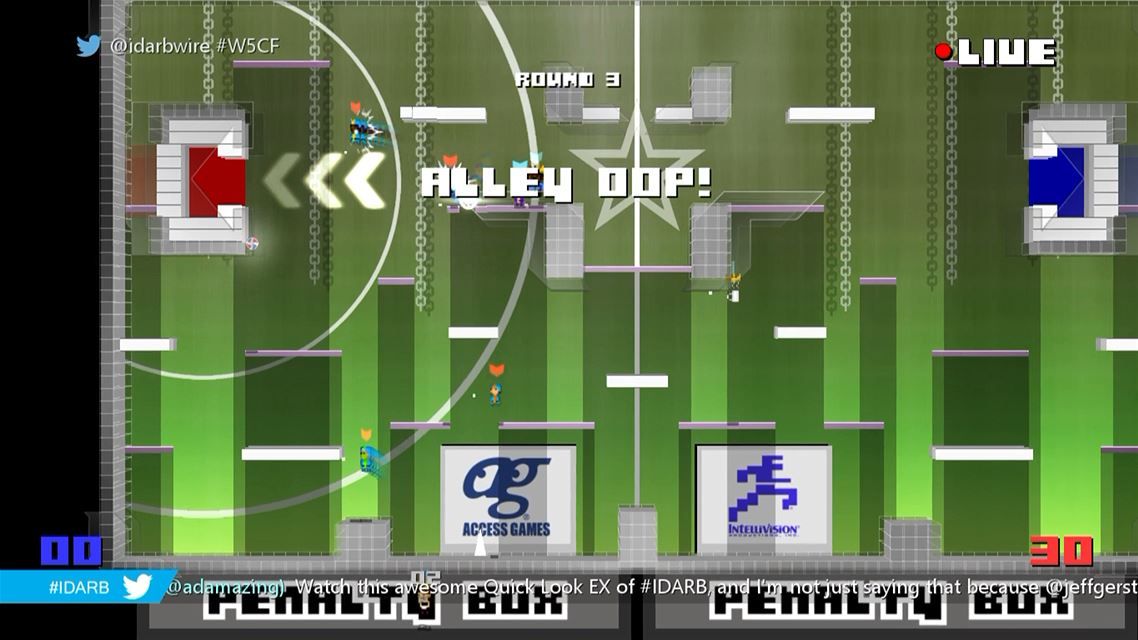 But as with any game designed for team play, mutliplayer is where #IDARB hopes you focus your attention. The title can be played with a whooping 8 players locally (4v4), if you happen to have that many Xbox One controllers to go around. Thanks to the level platforms, challenging mechanics and an element of score multiplier, #IDARB can be great fun for short bursts. The general chaos that erupts when you finally score after building up a huge multiplier, or get denied that last minute opportunity to tie the score as the clock runs out, are all good fun. But, that enjoyment is fleeting. A few games in, when all your friends have a chance to become familiar with the controls, it becomes a serious competition. But because of the controls and mechanics, #IDARB isn't really meant to be taken to competitive levels. A match or two between friends is fine, but it's difficult to see the game being played after everyone's had hours of practice and it becomes a matter of skill and potentially luck.

Having exhausted the local player pool, you might choose to venture online. Here, the game's apparent focus, is where #IDARB struggles. Matchmaking is problematic, often refusing to work or taking a while to find any opponents. At its worst, it's just very laggy when the match does get underway, a big problem for a game based on precision. An equally big gripe is the multiplayer design itself; you can only play against the same number of opponents online as you have locally. So for example, if you're playing solo, you will only be able to participate in 1vs1 matches. If you have a friend over, you can only play as 2v2, and so forth. A lack of any AI players means you're stuck in matches with the same number of players as you have locally. It's a troubling design and one that further puts #IDARB's longevity further into question.

To spice things up further, the game features a concept known as hashbombs. Whenever someone tweets @IDARBWire or types on Twitch about #idarb (if the user has it active) with any number of other codes, the game gains a special effect. So for example #flood fills the arena with water, #boo produces a scary image on screen, and #clown transforms the arena and music into something cheerful. The effects vary in their entertainment value, and this sort of interaction really makes #IDARB a good fit for Twitch and YouTuber's. And perhaps that's the whole point of the game - to create more whacky videos with direct game-altering input from your viewers. If that's something you're interested it, by all means give #IDARB a go. But for the rest of us, being under a threat of random effects is probably not as fun as it sounds. Further, there is no way to trigger these effects on demand from in-game if you actually want to try them out. 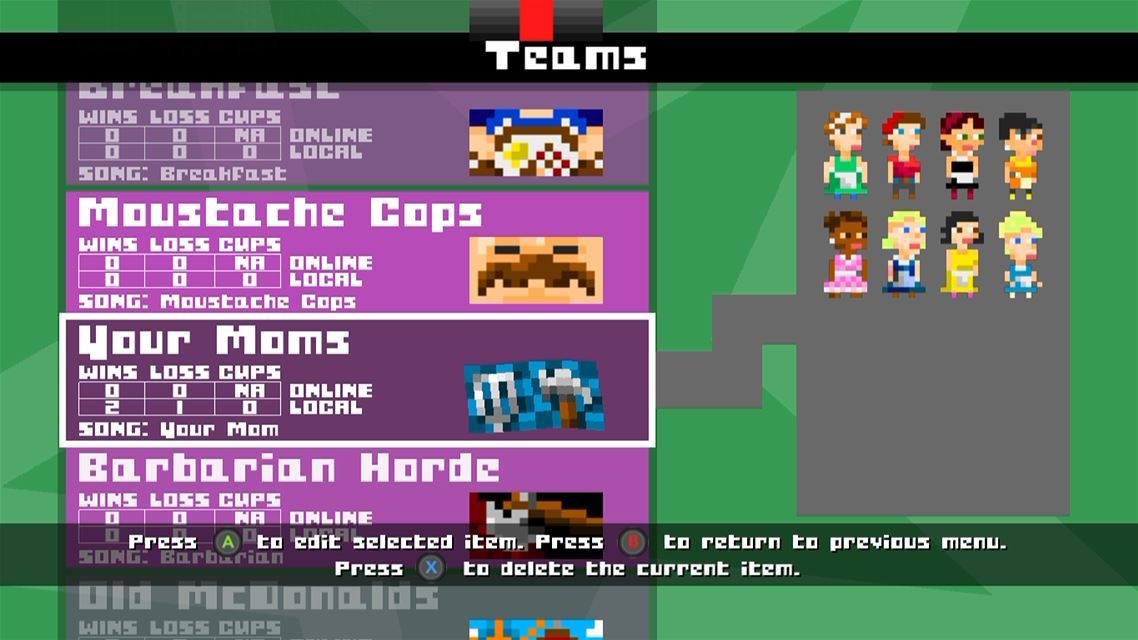 The game's pixelated, 2D aesthetics will likely not shock anyone in today's market oversaturation of this graphical style. Still, #IDARB looks clean and welcoming, with bright colors and a smooth framerate. For those wishing to customize their team's members, there is a model maker built right into the game. Players have already taken to creating various characters, from The Simpsons to Star Wars. For those wishing to utilize the Kinect, the game offers a QR code system that makes sharing custom characters easy. You can also register new creation items via these codes. Another customization tool even lets players create their own audio files to use as victory songs, or design team logos.

#IDARB was designed with a specific target audience in mind. The team-based, multiplayer focused approach with specific social integration is meant to attract as many viewers as possible. It's a game that's probably more fun to watch than to play for extended periods of time. Because between the poorly designed online multiplayer, matchmaking issues, and uncontrollable hashbombs, there's probably not much staying power for the game in a circle of local friends. But take it to an exhibitionist area, such as YouTube and Twitch, and you might find a circle of fans that want to see exactly the chaos that #IDARB delivers. Unlike games that take a similar crowd-pleasing approach such as Goat Simulator, this is at least a proper game with good foundations. It's currently free for Xbox One Gold subscribers, but when it leaves the program next month is when we'll really see if the game can manage to hold the attention of the viewing audience. For $15, it might be asking too much.

Our ratings for #IDARB on Xbox One out of 100 (Ratings FAQ)
Presentation
78
The pixelated graphics are becoming old news at this point, but the game runs well and looks colorful, especially during hashbombs. Customizable music is a plus.
Gameplay
75
There's a unique oddity about #IDARB's ball game. It's easy to play, but difficult to master. It would have been nice for the arenas to be more dynamic or for sides to switch during matches.
Single Player
NR
A few matches against the AI
Multiplayer
60
Despite being the game's selling point, multiplayer suffers from an inflexible design and matchmaking issues. When you do finally get a match going, it can be fun for a while.
Performance
73
The game runs well for the most part, though online connectivity issues can be frustrating.
Overall
71
#IDARB was created with the ideas of players across the web. And while it can be fun in short bursts - especially if you're a whacky YouTube/Twitch personality looking for new ways to engage your audience - it demonstrates that design by committee doesn't always produce the best results. 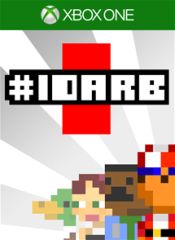