Keeps the spirit of RPGs of decades past going

They don’t make ‘em like this anymore. Now that games like Fallout have gone into the 3D space, the mantle falls to games like Wasteland 2 to keep the spirit of RPGs of decades past going. Thankfully, it does it very well. A mere 26 years after the original came out, here is the sequel to remind us that high octane action isn’t always the way to go. Sometimes, it’s about tactics, reading and a little bit of luck. 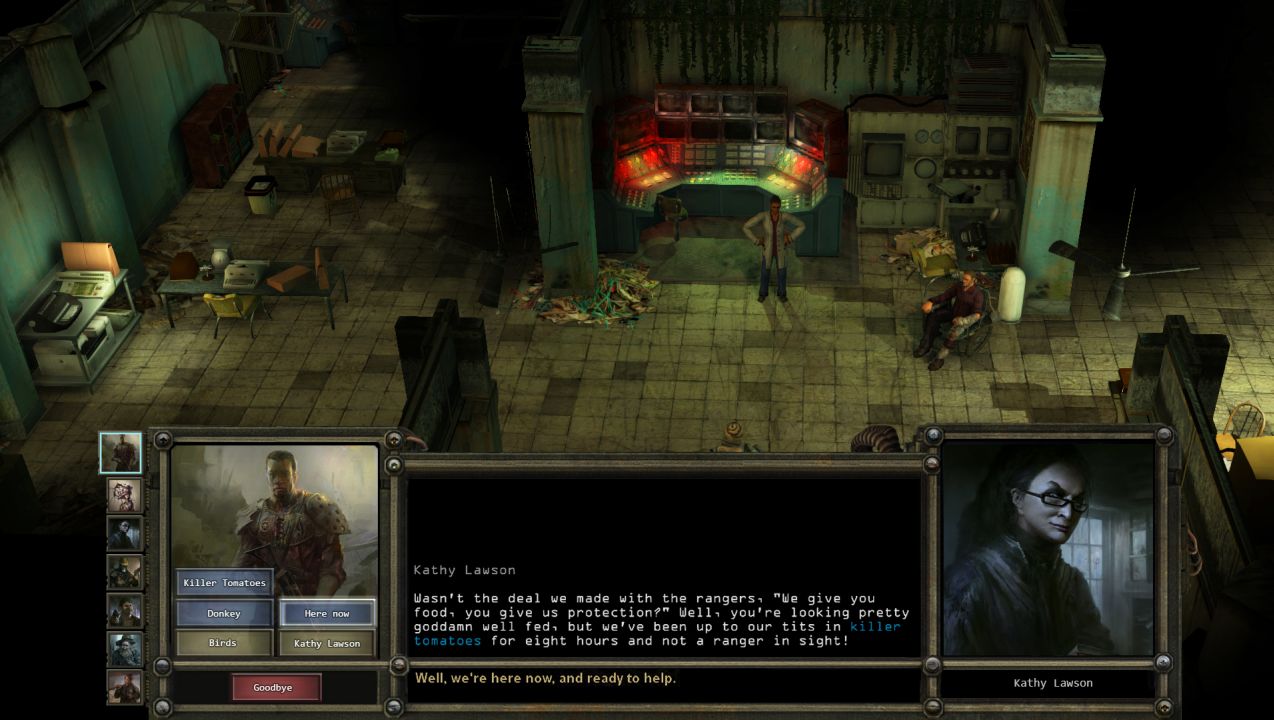 You control a group of Desert Rangers out in the wasteland after nuclear holocaust took place in an alternate version of 1998. Society remains, but it’s segmented, and multiple factions are vying for resources, control, and power. It’s up to the Rangers, and more specifically, you, to keep the peace. Of course, you might not have everyone’s best interests at heart, this is an RPG after all. Moral decisions are the order of the day. You can totally play the role of maverick outlaw and slaughter everyone you meet. Or you can play everything by the book. Usually, a mixture of the two works wonders.

Premade characters are available to choose from, or you can create your own from scratch. The action is controlled from an overhead view. You move your party around by clicking, and can move each one individually if you wish. When it comes time for combat, it becomes turn based. You’ll see the initiative order at the top of the screen, and then each of your party members and the enemies take their turns using a certain number of action points. Moving, shooting, reloading and using special abilities all use up points, so it’s up to you to plan out how best to make your move. Do you run to take cover in order to take less damage and get an aiming bonus next turn? Or do you simply run at the enemy all guns blazing and hope for the best?

Wasteland 2 is all about player choice, from combat, to moral decisions, and even how you interact with other NPCs. The lore and script to the game is extensive to say the least. Nearly everyone you meet has something to say, and many of them have paragraphs upon paragraphs of text to read through if you so desire. While someone is talking, you’ll notice keywords in a different color, which you’ll then be able to enquire further about. It’s a good way of making conversations seem a bit more fluid than a simple information dump. If you’ve got the right type of abilities in your party, more text options will open up to you: Smart Ass, Kiss Ass and Hard Ass. These are pretty self explanatory, but can get you ahead in tough situations. 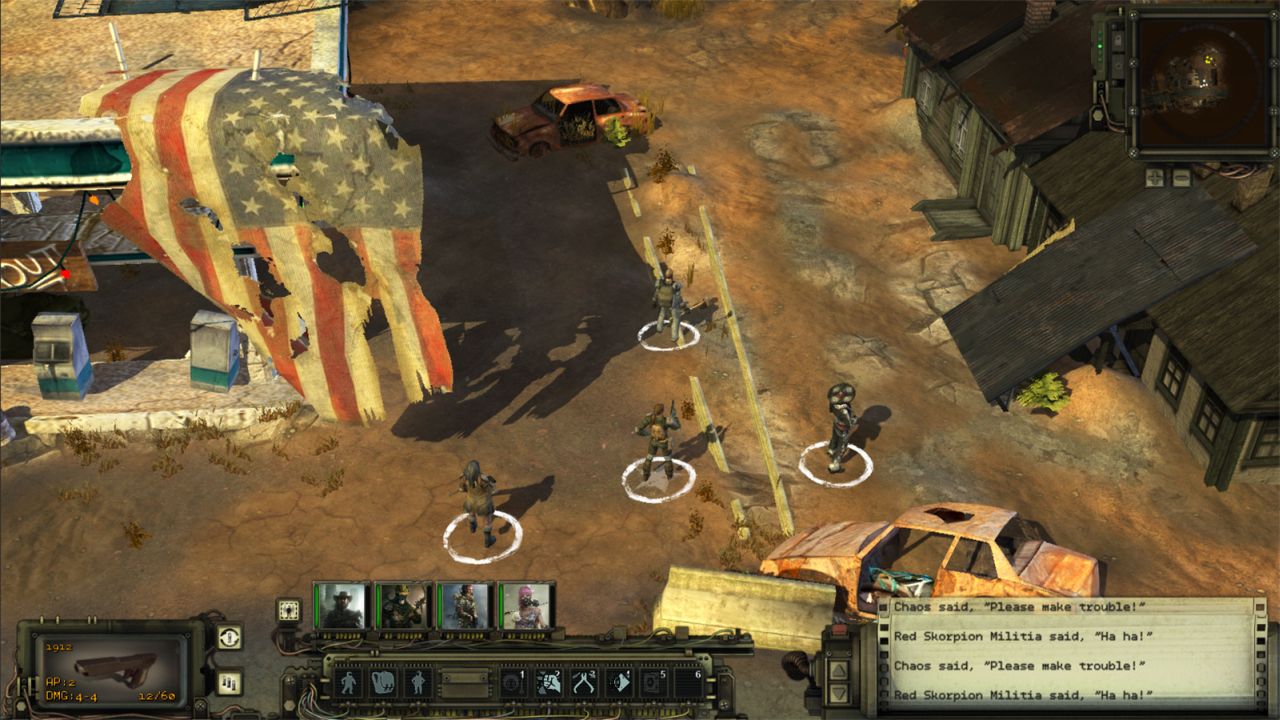 Having a balanced party is key to success, because Wasteland 2 is a hard game. I have been unashamedly playing on the easiest difficulty after finding the normal one too tricky to handle a lot of the time. Even so, many combat encounters can turn out to be tough affairs. As a piece of advice, always have someone with the Surgeon skill on your team. I started a game without one, and quickly realised that I was unable to heal any of my party who were downed during a fight. Without a Surgeon, they’ll simply bleed out, and once they’re dead, they’re dead. No coming back, and you’ll be down a party member until you find a way to replace them.

It’ll also be helpful to have someone who can pick locks, disarm traps, hack computers, and so on. There are dozens of different abilities, and it’s impossible to have them all, so you’ll have to decide how you want to play. There will usually be two or three ways of getting through a certain area. For example to get through a hallway filled with poison gas, you could hack some doors and turn on the ventilation system. Or you could run straight in, bash down a wall with brute strength and hope no one dies in the process.

Of course, you’ll need to make room for weapon skills as well. Without them, you’ll have less chance to hit and you’ll be spending more action points during your turn. You’ll want a range of weapon skills in your party too. If everyone’s using assault rifles, you’ll run out of ammo pretty fast. You might want someone proficient with powerful energy weapons, or shotguns, as well as run of the mill rifles and pistols. You can even have melee characters, who won’t do as much damage and they’ll have to get up close and personal, but at least you’ll be conserving ammo for the rest of your party. 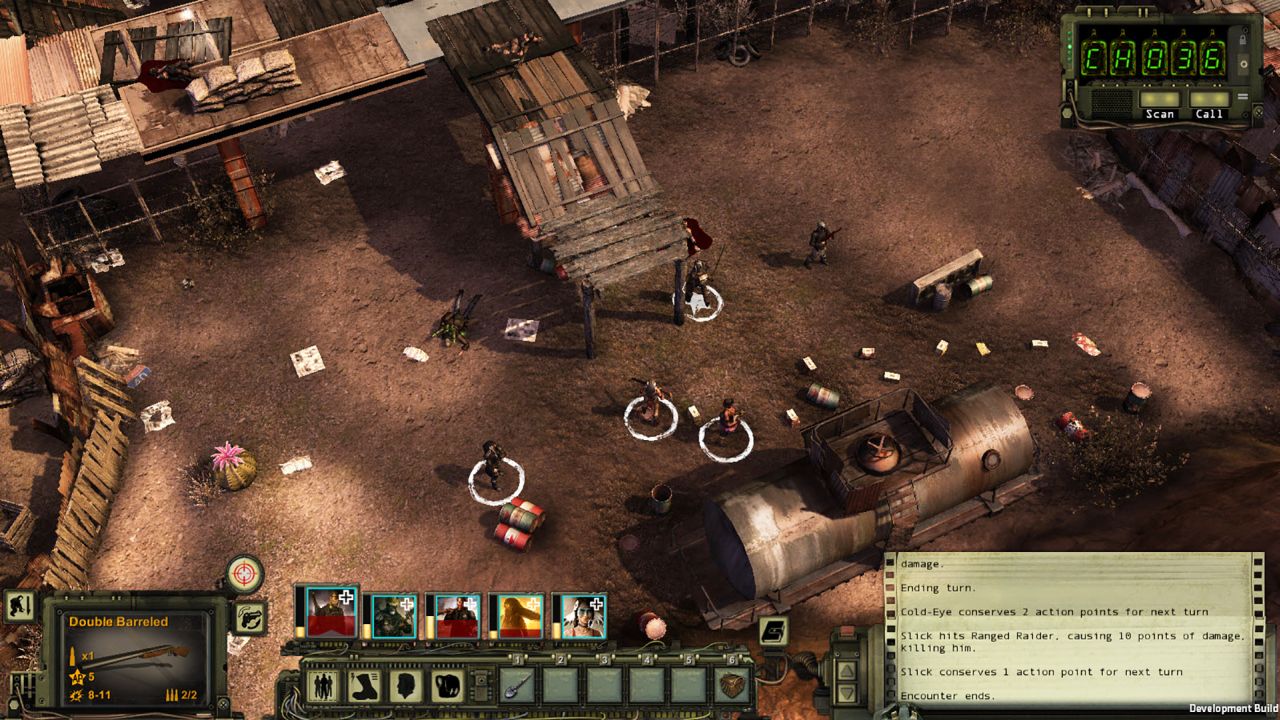 In terms of presentation, it’s not the best looking game, but the gameplay is such that this can be forgiven. The environments are largely pretty muddy and boring, and the character design isn’t interesting, however the way the game is designed helps your imagination fill in some of the less exciting areas. The main quest dialogue is voice acted, and done pretty well for the most part. But then it becomes a disappointment when you have to read for the rest of the time. As for the performance, it ran perfectly fine, although I did have a severe memory leak issue related to the world map. I did some searching and found that this was a highly rare problem, so it’s not enough for me to dissuade you from purchasing it.

Wasteland 2 is a game that tickles that old school tactical RPG itch. Not everyone will have that itch to scratch, and this is a game that’s most certainly not for everyone, particularly if you’re used to more modern RPGs. However if you’re perhaps an older gamer, or someone who is looking for something a bit different, then I can wholeheartedly recommend it.

Our ratings for Wasteland 2 on PC out of 100 (Ratings FAQ)
Presentation
75
It doesn’t look bad, but the graphics do look dated by today’s standards. Voice acting is good, but there’s not enough of it.
Gameplay
90
A simply excellent mixture of turn based strategy combat and old school RPG questing. It’s hard, but ever so rewarding when you’ve got your party balanced well.
Single Player
90
The main story lacks real intrigue, but there are plenty of side missions to get involved with as well. It’s easy to spend dozens of hours on one playthrough.
Multiplayer
NR
None
Performance
(Show PC Specs)
CPU: Intel Core i5-3470
GPU: AMD Radeon HD 7800
RAM: 8GB RAM
OS: Windows 8 Professional

85
I encountered a rare blue screen of death issue, but for the most part the game ran perfectly well.
Overall
87
An old school RPG that you can really sink your teeth into. There are hours of combat and questing to be had, and with a little more presentational polish, Wasteland 2 could’ve been something really special. 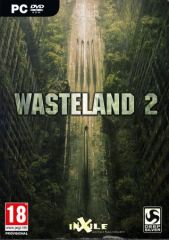