Gods Will Be Watching Review

Something a bit different and well worth checking out

What do you think your purpose in life is? Perhaps we all have a mission handed down from the Gods to undertake. Gods Will Be Watching is part point and click adventure, part management simulator. Taking place across space and several planets, it’s a story of the struggles between two rival factions in the galaxy, and perhaps some higher powers. You play as Sergeant Burden, and it’s up to you to lead your group through thick and thin.

A lot of games feature pixel art these days, but those shown off in Gods Will Be Watching are particularly superb. The graphics look simple, but show off a remarkable amount of detail. Subtle cues that will help you out in each chapter are important to look out for. There’s also a great soundtrack which really puts across the feel of each different level. The game needs to look and sound good, since all you’ll be doing is choosing dialogue options, or selecting from a list of actions based on what’s going on around you. 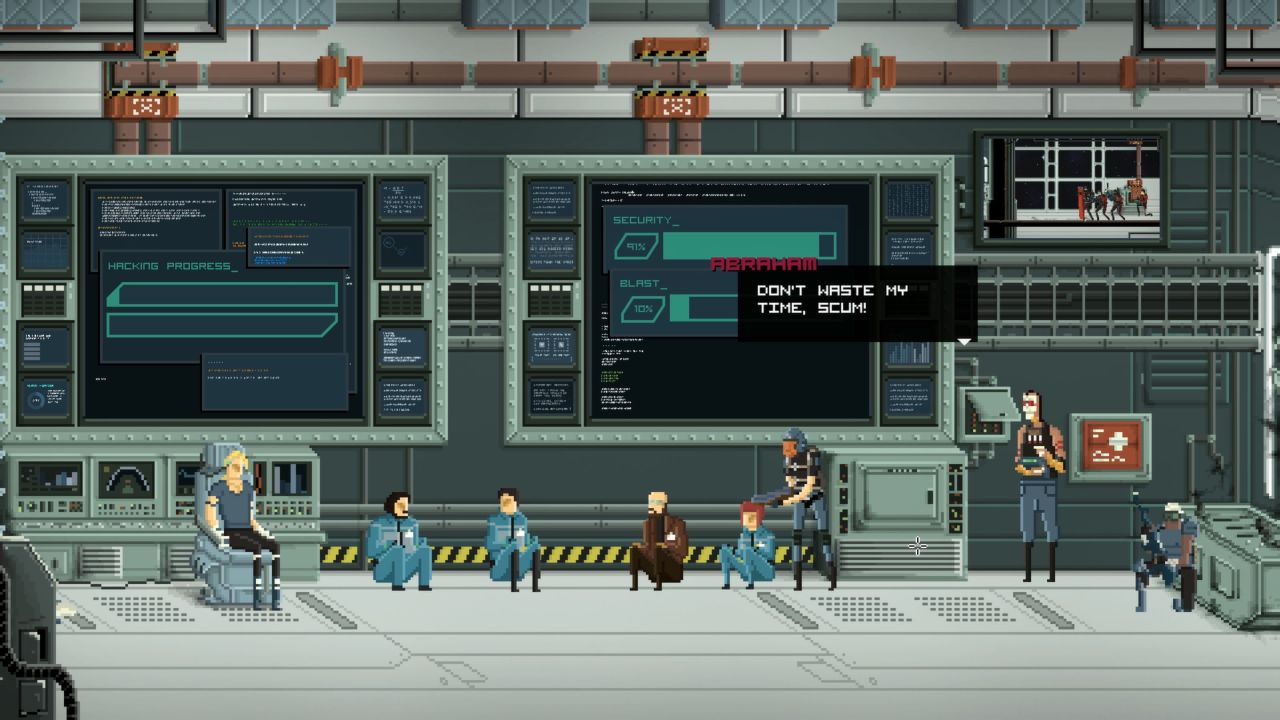 The game takes place over six (and a bit) chapters, with each one focusing heavily on depression and sacrifice. For example, in one chapter you must decide how your stranded group is going to survive until rescue. You need to keep the fire running, hunt for food, protect yourself from wildlife, produce medicine and most importantly repair the radio so you can use it to contact your ship. It’s bitterly cold at night, and this planet only has a few hours of daylight a day, and morale is low. You can see how managing all that becomes overwhelming.

Before starting, the game warns you that the default difficulty setting is hard, and you’ll die a lot. You are urged to try it out however. It’s not lying, because I lost count of the amount of retries I had to employ. There are no save states, if you die, it’s back to the start of the level. This turns each chapter into an incredibly tense affair, with a deadline looming, and calamity around every corner. In one level I managed to dig my way out of a cave with a limited air supply, having synthesised a cure for a deadly disease with only 30 minutes remaining (which equated to one in game ‘turn’). Most of the levels are very cleverly designed to be fair, yet extremely punishing if you make a mistake. Having members of your group die is commonplace, and sometimes it’s even in your best interests to sacrifice them for the greater good. 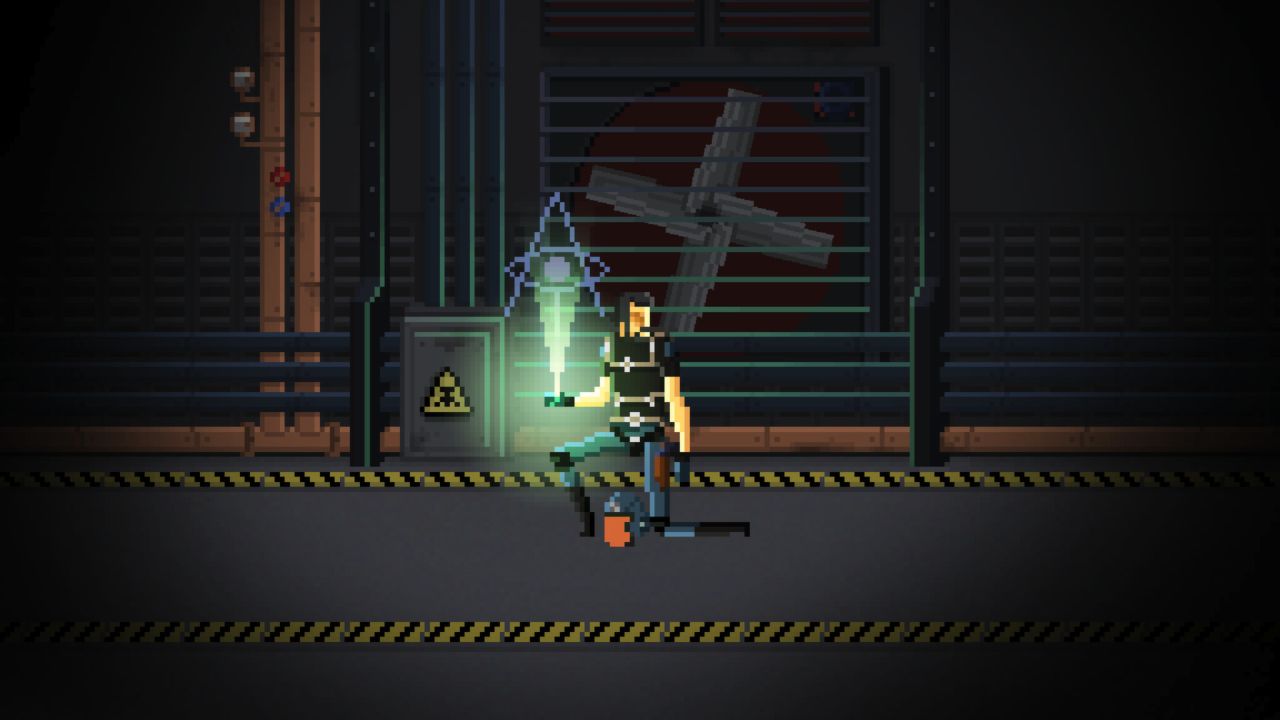 Only one chapter managed to let the game down, which was chapter five. Here, you’re commanding your group across a barren planet in search of an escape ship. You follow your beacon, avoid or crush enemy patrols and camps, dig for water where possible, and rest where you can. It’s presented in an old style adventure way. Your movement options are North, South, East and West. However, if you miss the deadline, or run out of party members, the entire map is randomised on the next playthrough. This randomisation means that sometimes you can just get an unlucky arrangement. Running into multiple enemy camps in a row, or going for hours and hours without finding any source of water means certain death. It took me about five hours to do this one mission, and it was incredibly frustrating since I didn’t feel like I was doing anything wrong. To add insult to injury, the game crashed during this chapter multiple times.

I kept going though, since I wanted to see what awful situation the game would throw me into next. Each level has similar themes of desperation and anxiety, but the circumstances are always different, and your objectives change. Some of the design decisions seem strange. For example dead characters return alive and well in the next chapter. This is all explained at the end, but it still seems like a bit of a cop out. When you know that a sacrificed character will make their return, it takes away some of the gravity. 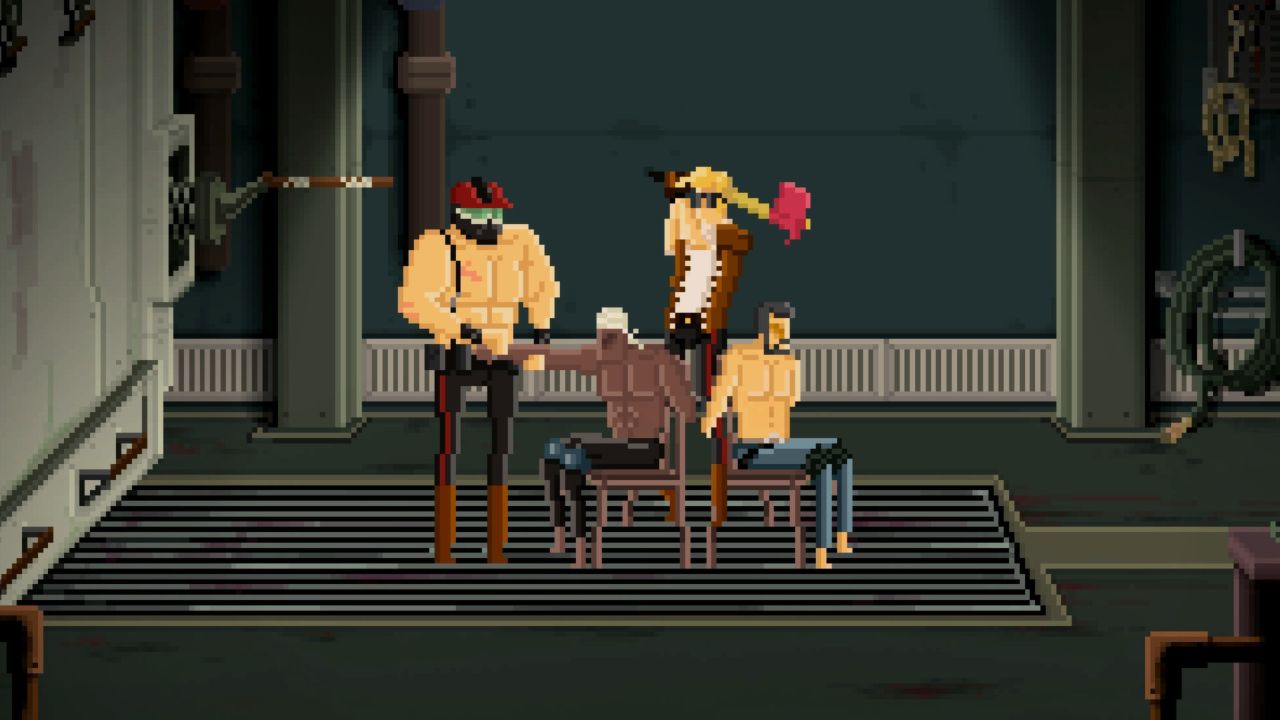 While the individual stories of each chapter are well explained, the overarching story is a bit more obtuse. The storyline jumps around and is hard to keep up with at times. The characters could be fleshed out more, because as it is you form attachments with them based on how they perform your actions rather than what they say and do. The situations you find yourself in are often more interesting than the outcomes.

Overall, some technical issues and frustrations with the difficulty stop Gods Will Be Watching being truly great. However it is still fairly unique in the way it handles standard text adventure tropes. Games are exploring darker themes recently, and this one adds really well to that. It’s well worth a look, especially in the summer lull where good game releases are hard to come by.

Our ratings for Gods Will Be Watching on PC out of 100 (Ratings FAQ)
Presentation
85
Absolutely gorgeous pixel art accompanied by a great soundtrack. However, sometimes some clickable options are clustered together resulting in confusion.
Gameplay
70
Simple point and click. You’ll be choosing dialogue options, or actions based on the circumstances. Often logic based, but sometimes luck is involved.
Single Player
80
Overall the story is highly satisfying to play through. There’s not a great deal of payoff at the end, but the stories contained within each chapter are compelling.
Multiplayer
NR
None
Performance
(Show PC Specs)
CPU: Intel i5-3470 @ 3.2GHz
GPU: AMD Radeon HD 7800
RAM: 8GB RAM
OS: Windows 8 Professional

65
One chapter was plagued with sudden “Out of memory” errors which caused a hard crash and all progress to be erased.
Overall
77
I wanted to like Gods Will Be Watching more than I did. It was let down by a few technical issues, and one chapter in particular was highly frustrating. Overall, it’s something a bit different and well worth checking out.

Gods Will Be Watching 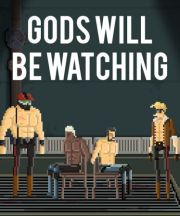 644. Hero of Many
PC
Related Games