Always sometimes a compelling tale. No, make that just 'sometimes'.

You know, Devolver Digital, I thought I knew where you stood. I looked at the likes of Serious Sam 3, Shadow Warrior and Hotline Miami, and I saw a publisher that could spot a brutal balls-out action game from three miles away. So, when I heard about Always Sometimes Monsters, I was understandably confused when it was not, as I had initially expected upon hearing the name, a high-octane spiritual successor to Altered Beast, but rather more something that somebody had apparently put together in RPG Maker. “This intrigues me,” I said to myself, stroking the goatee of a confused passer-by in the absence of my own. “What could such a game do to break the surface and raise itself above the fetid waist-deep slurry of Final Fantasy rip-offs?” Quite a lot, as it turns out.

For starters, Always Sometimes Monsters isn't an RPG – or if it is, it's an RPG in the same sense as Consortium, where there aren't strictly any RPG elements but you're nevertheless contributing to the development of a character through your actions. If anything, I'd describe it as an interactive narrative; a choose-your-own-adventure along the lines of The Stanley Parable, where the central mechanic consists of making choices that manipulate the plot in subtle and not-so-subtle ways. Don't let the presentation fool you: it's a gritty, contemporary, surprisingly confrontational tale, about as far away as you could get from the gaudy escapist fantasy that this format has traditionally supported. Sex and drugs and rock 'n roll, as the saying goes, but also poverty, wealth, marriage, subterfuge, love and blackmail. There are indeed monsters, in a manner of speaking, but they wear human faces. 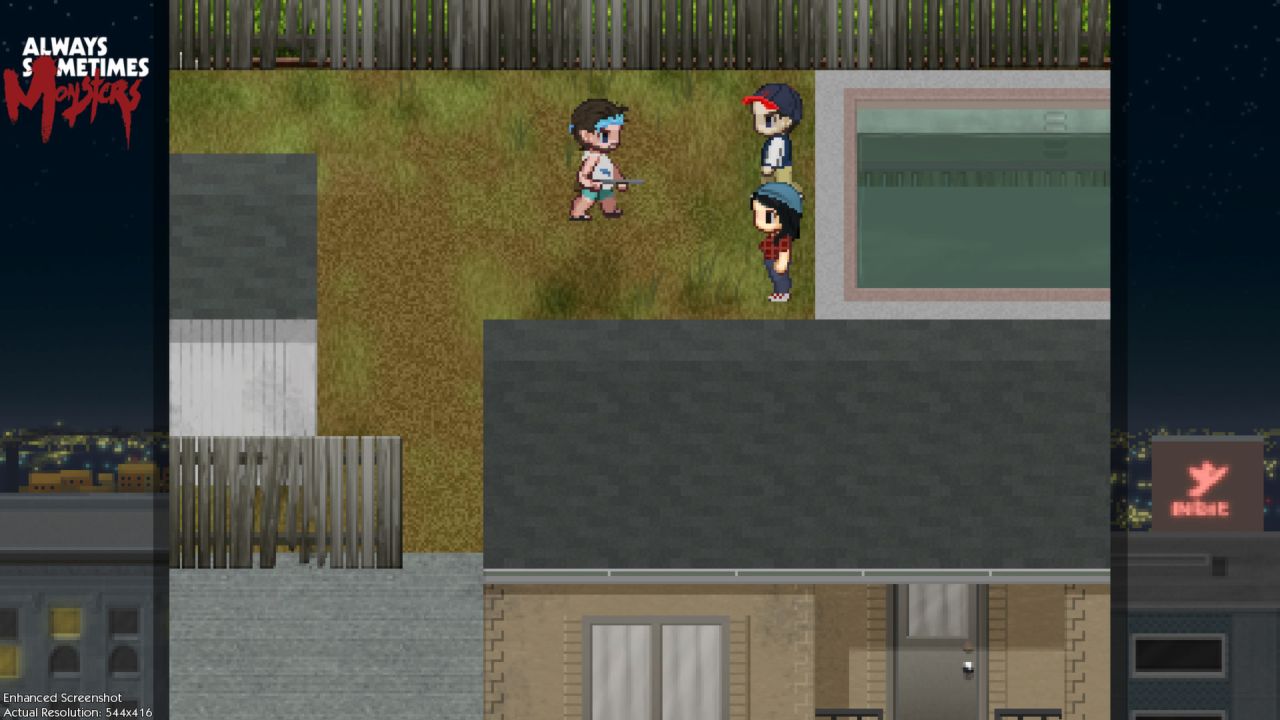 Most of the above manage to show themselves in the prologue, which doubles up as a sort of character selection system. A wealthy publishing agent has thrown a party for a bunch of trendy twenty-something urbanites, hoping to pick out an aspiring writer to strike a deal with, and lo and behold, you're the lucky one. The game frames the selection process – where you pick your character and their romantic partner – as a series of conversations and perspective switches, and it's quite a clever little touch if nothing else. As far as I can tell, who you actually pick is entirely skin-deep, only affecting appearances and some of the dialogue, and there's a reasonably diverse selection of characters on display. Can't play as the pets, though. That loses you ten points by the way, Vagabond Dog.

Fast forward a year and – because something has to go drastically wrong, obviously – your life has collapsed. You're still a writer, but now you're nearly broke, your publishing cheque is paying peanuts, you're about to lose your apartment and you're still wearing the same clothes. Ah, a character I can relate to, at last. As if it wasn't enough, your now-estranged partner is getting married on the other side of America to a mystery individual, and just to rub salt in the wounds, they've sent you an invite. With nothing else to do – you know, what with being unemployed and not owning a computer – you set your sights on crossing the country with the purpose of... wait, why are we doing this, anyway? Are we really that attached to them? 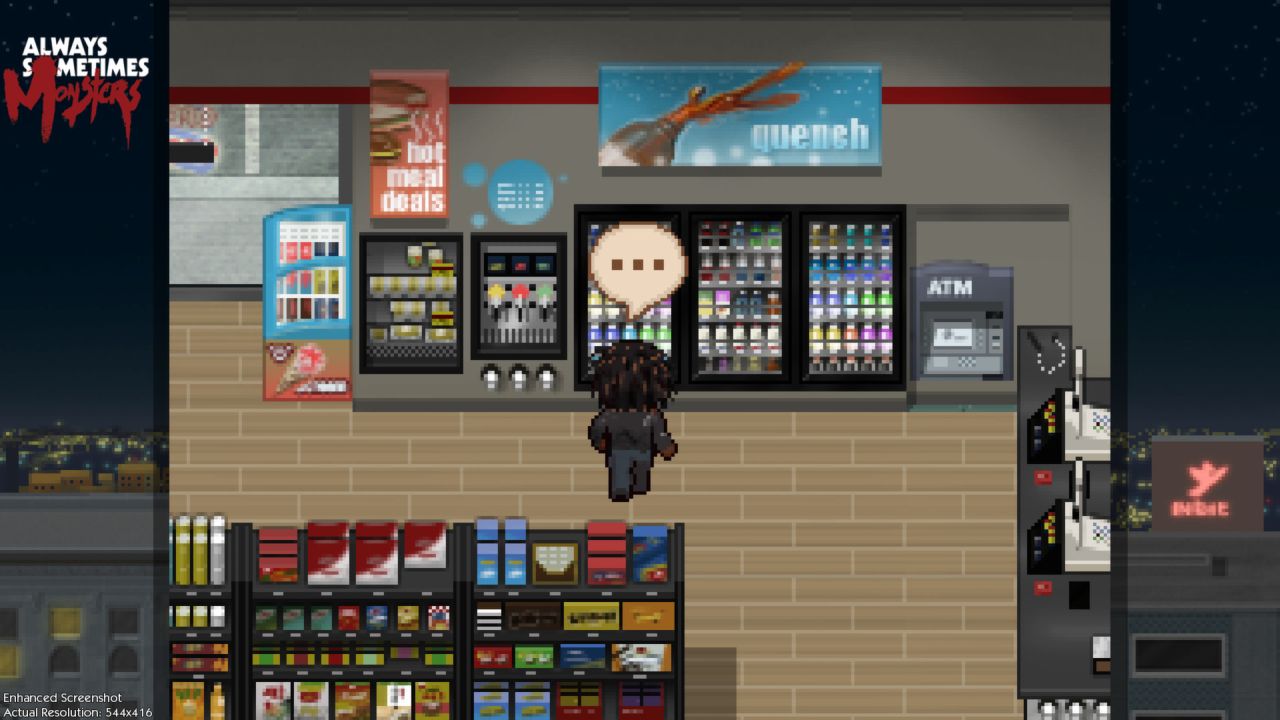 Apparently we are. I know video games have had plenty of trouble introducing the love interest character in the past – stopping just short, in some cases, of barking “you love this woman, now go brave untold monstrosities on the off-chance that you might save her” in your ear – but I was expecting something a bit more in-depth from Always Sometimes Monsters. We've exchanged about three lines of dialogue with this person since the game began, but somehow we're supposed to be so desperately smitten with their static character portrait that an impromptu cross-country trip seems justified. Later on they get fleshed out a bit through various flashbacks, but it just isn't enough to make them feel like anything more than a MacGuffin. How exactly are we supposed to enjoy a character drama when one of the characters spends most of the game several hundred miles away and never answers the bloody phone?

So, the pointless cross-country trip. You have thirty in-game days to make it to the wedding by any means possible, earn yourself as much money as you can, and – most importantly – not die. Along the way you'll get tangled up in more trouble than anybody would believe possible, make decisions on how to manage it, and deal with the resulting outcomes. There's something of a survival mechanic early on, where your stamina intermittently drains whenever time advances, but food is cheap and player characters in this universe are apparently so durable that they can survive entirely on two sandwiches a day, so it quickly becomes irrelevant, leaving you to concentrate on the meat of the game: choosing between two dubious options on a menu. 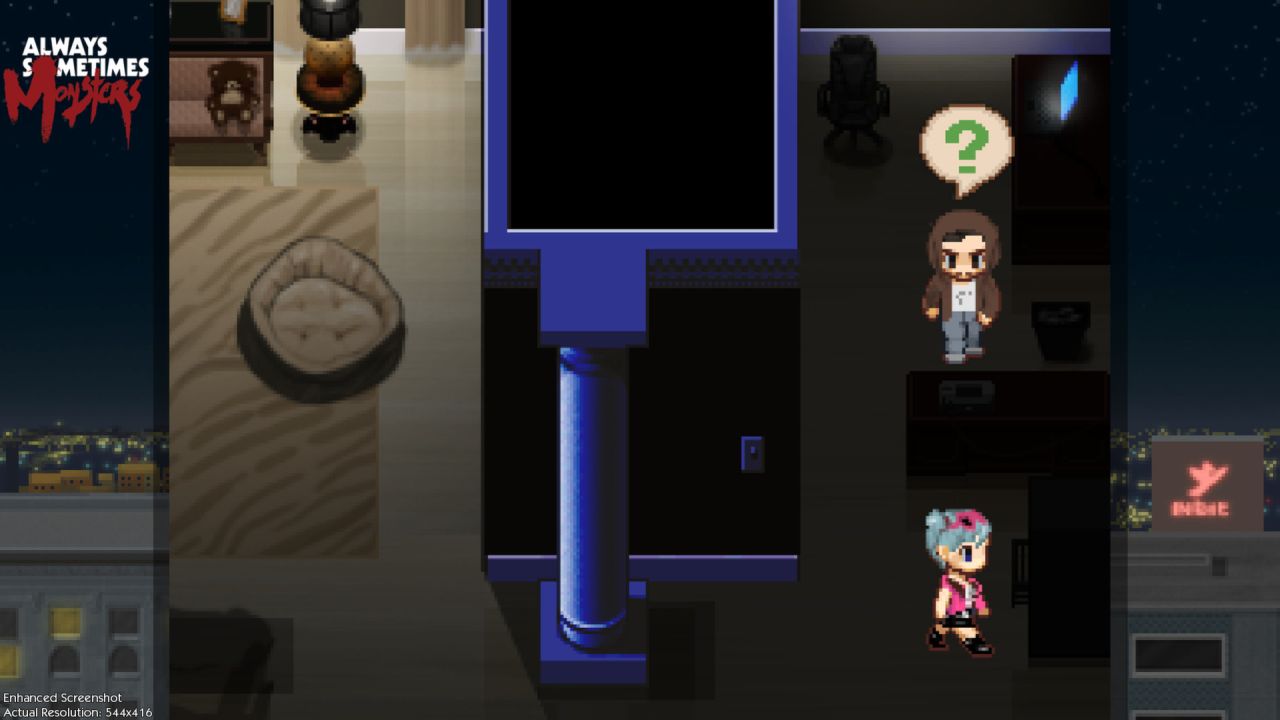 Choice is at the centre of Always Sometimes Monsters, constantly altering the plot in ways that may not even become apparent until you try another playthrough. At every turn, you're assaulted with choices, and it's really quite remarkable to behold how the plot changes depending on how you handle them. A lot of games have claimed that 'every choice has consequences' – I'm pretty sure I'm unintentionally quoting something there – and few have ever followed up with that claim with something more than maybe granting you a different weapon here and there, but Always Sometimes Monsters is different. While the plot is always moving more or less in the same direction, the path you take can vary massively. Of course, the idea with this sort of game is that you're supposed to play through it several times over to marvel at how much things can change, and that's all very well – even taking into account that it's around eight to ten hours long, depending on how much time you spend aimlessly tramping around the streets – but such a premise relies on a nasty, hairy, six-foot tall tattooed question: is the game fun enough to play more than once? No, hang on, we're getting ahead of ourselves here. Is the game fun?

Well, it's certainly not the smoothest experience the first time around. In an effort to stop those thirty days running away from you just because you accidentally left the game running before going out for a night on the town, time only advances in Always Sometimes Monsters when you complete a significant event, like travelling between cities or advancing the plot. Great, but sometimes advancing the plot is the only option available to you, so the game won't budge until you've found the one solitary place you're supposed to be in. Sometimes the means by which you're supposed to work this out are pretty damn obscure. This, by the way, is where all that time spent 'aimlessly tramping around the streets' comes from, as I found that often the only way to successfully continue was to meticulously check every last area via trial and error. If that sounds like fun to you then I want to introduce you to my jar of assorted washers, because I'm fairly sure you'll have a ball sorting them. A story that grinds to a halt every hour so that it can send you running on a scavenger hunt doesn't strike me as an example of good storytelling, in the same way that a motorcycle that occasionally catapults you over the handlebars for no apparent reason couldn't possibly be considered a good means of transportation. And in a game like this, where story is everything, that's a worrying habit. 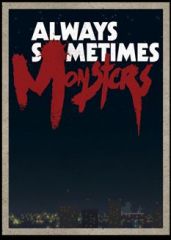