I'll be the first to admit that I am not a Dark Souls expert. I finished the first game once, put it down and never came back for more. So while this review is coming from someone who played the previous game, I was not familiar with its every intricacy and will freely admit the same with regards to the sequel. Like its predecessor, Dark Souls 2 is jam packed with secrets, hidden content and more character class variations and specializations than I could possibly have time to thoroughly explore for the purposes of a review. So you could say this review is coming from a spontaneous fan of the series, someone who enjoys the challenge and design but doesn’t take a completionist approach with it. 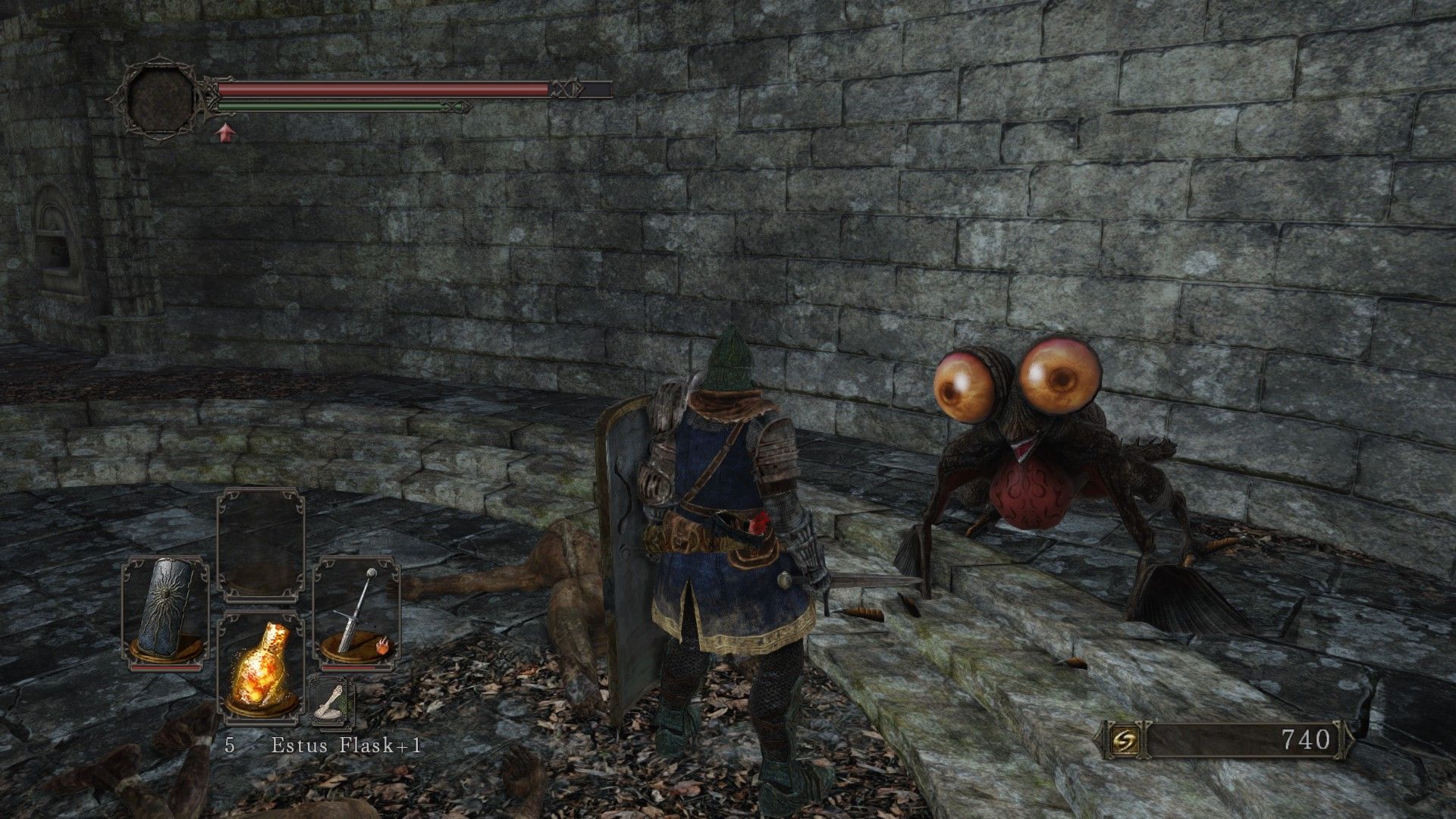 As a sequel, Dark Souls 2 does a good job of taking the individual components that lead to the success of the original game and building on them, but it fails to create a world as cohesive and memorable as 2011's Anor Londo. The high-risk, high reward system of souls, bonfires and challenging encounters does make it over intact, and despite a few problems, the formula is as potent as ever. Creeping into a new territory for the first time is exciting and terrifying as brightly glowing items lure you off the main path into treacherous side rooms bristling with hidden dangers. You will still make difficult decisions about pressing on into new territory with a large collection of souls in hopes of finding a new bonfire against retreating to your last bonfire in order to rest and level up. It is the way in which the individual levels are cobbled together that Dark Souls 2 loses some of the wonder that made the original so enthralling.

Even though Dark Souls was pretty cryptic in the story telling department, I generally had some idea of what I had to do and where I had to go to progress the main story. If you asked me to explain the plot I would be pretty clueless, but the experience had some momentum and direction which greatly helped motivate you to push on. The sequel is far less focused in this regard. You are given incredibly vague instructions about your first four-part objective, which will end up taking such a long time to complete that you will likely just start looking for new areas and open doors. Several different areas are made accessible almost from the start, and figuring out where you need to go is left totally unexplained. I largely found myself going with the path of least resistance as I worked my way through the first and main part of the game. Things do become a bit more focused later on, but it's too little too late. 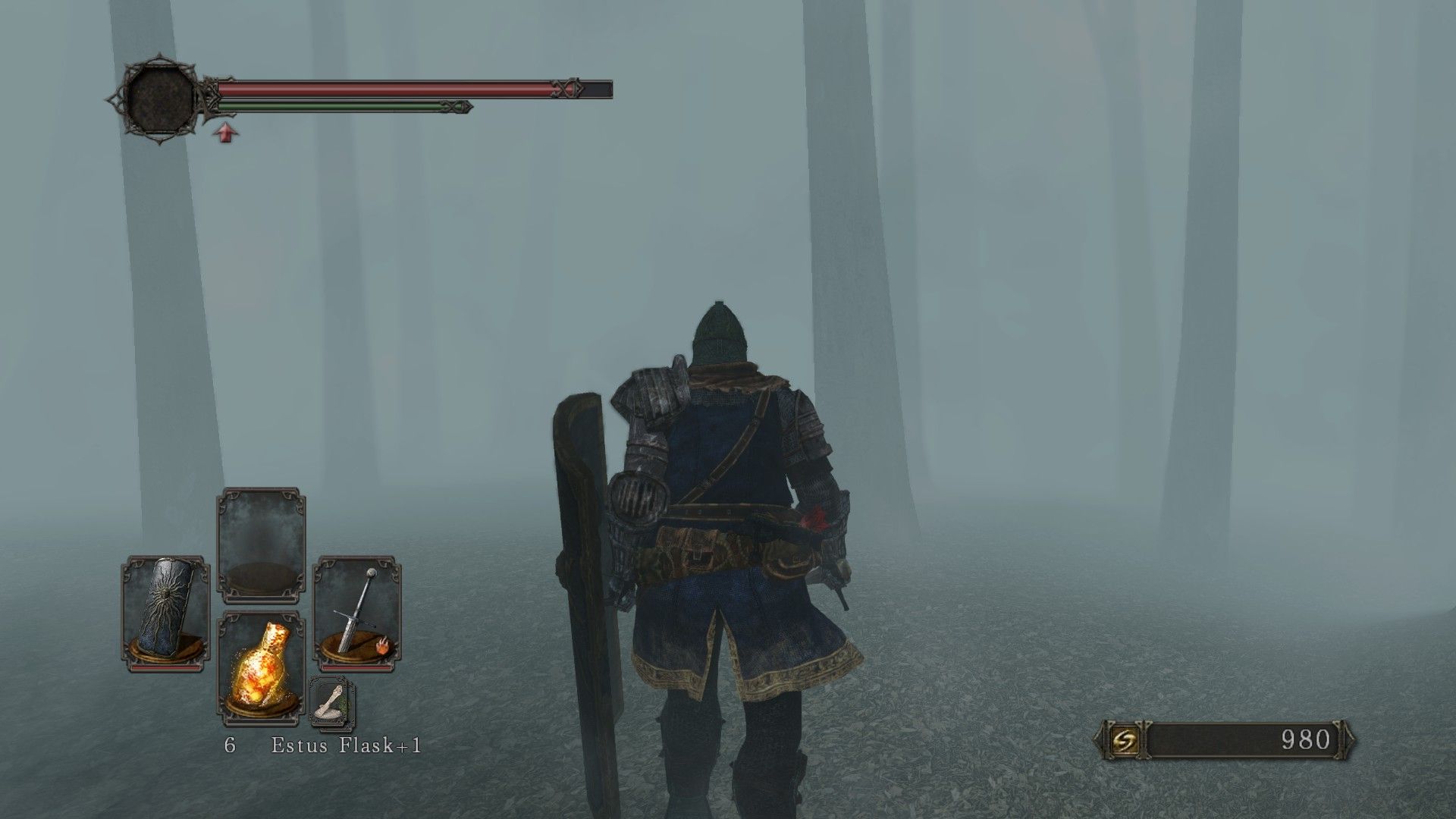 Exploring a foggy forest is a tense highlight

The world itself is built around a central hub area called Majula, and you must return here to level up and reinforce weapons and armour. The first few areas you explore from here seem to fit together nicely, but as you venture out the geography of the world starts making less and less sense. Areas are mashed together in odd ways; you might take a elevator up into an area that feels like it should be deep underground, or walk through a door in the upper levels of a castle to find yourself in a huge water filled cavern. At times it feels like the areas were designed separately and then mashed together without a lot of thought. In order to facilitate this new world design, you can fast travel between bonfires right from the start of the game. This serves only to further confirm how fractured the world is compared to Anor Lando, where everything felt interconnected with clever shortcuts leading you back to previously visited areas.

As a veteran of the original game it is difficult to say if the sequel is more accessible since I am already familiar with the core mechanics and design philosophy. The tutorial is more robust, and it takes a while longer to get to your first boss fight. This does serve to make the first two or so hours more manageable, assuming you don't wander into the wrong zone after completing the tutorial area. On the flip side, crucial information is still left unexplained, like how to level up and how to reinforce armor and weapons. I still had to look up a few things online, but probably less than in the first game. If you haven't played a Souls game before and want to know if the sequel makes for a better starting point than the original, the answer is probably yes, but there will still be a learning curve longer and steeper than in most games. 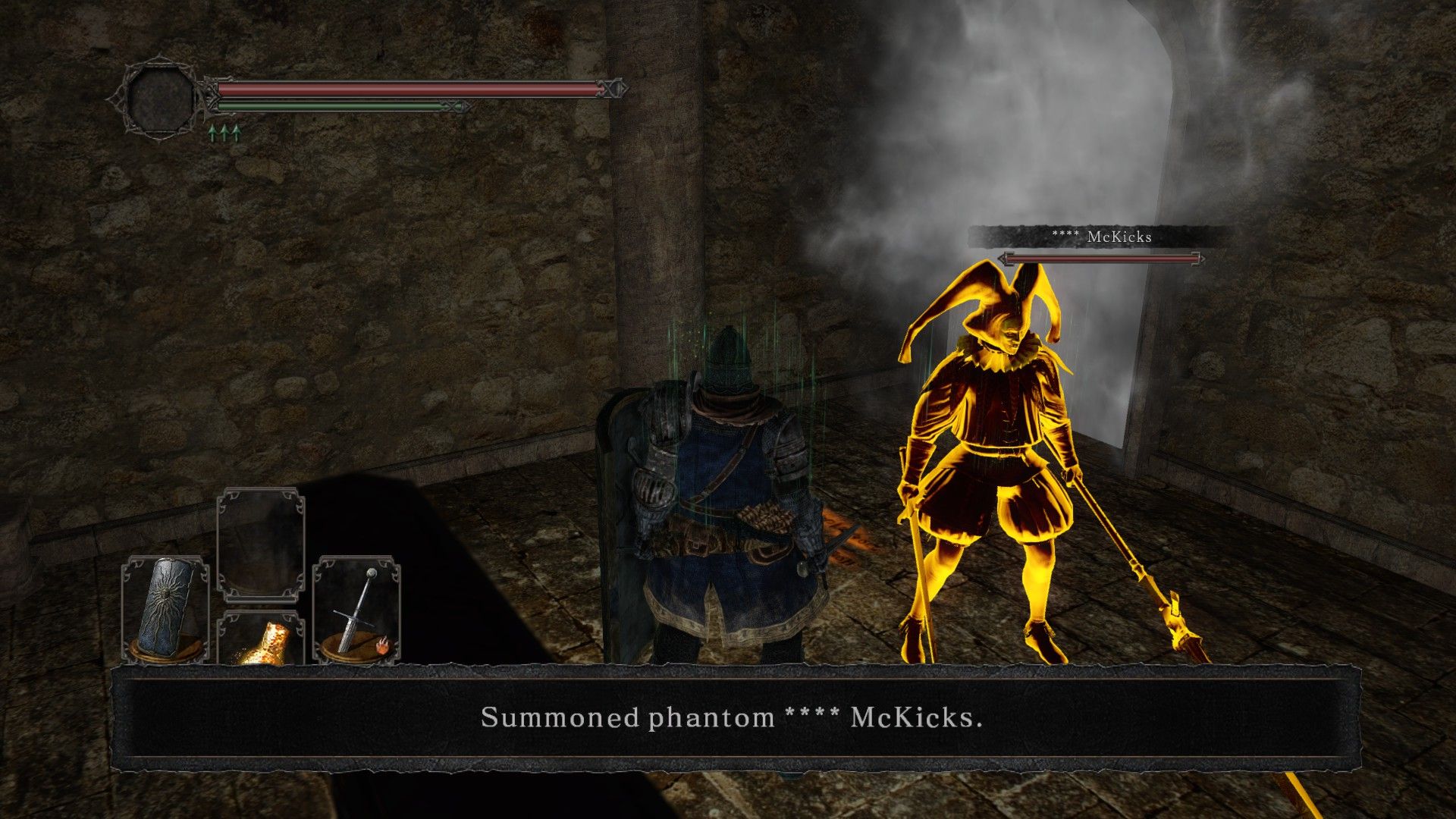 Summoning another player is the perfect cure for rattled nerves

The Souls series has built its reputation around difficulty, and the sequel certainly lives up to this, but it doesn't always achieve difficulty in the right ways. The best levels feature enemies offering up interesting blends of offensive and defensive attacks, forcing you to act carefully and think about each encounter before jumping in. One highlight level early on has melee enemies throwing pots of oil onto the player while strategically positioned archers fire flaming arrows at you. If you get hit by an oil pot and then a flaming arrow, you burst into flames. This makes for tense and challenging encounters that heighten the experience of exploring new territory. This caliber of enemy and level design is sadly rare in Dark Souls 2.

In order to achieve the difficulty that is synonymous with the series, many levels instead opt to rely on thin-spread bonfires and cheap enemy placement to create a challenge. Ambushes, traps, NPC invasions and illusory walls feel like ham-fisted ways of killing you a few times before making it to the next bonfire. You expect this sort of stuff from a Souls game, but its relied on much more heavily here and starts to wear thin after a while. There are also a few pretty extreme difficulty spikes throughout the game. One of these comes a few hours in, where you must fight a series of giant stone knights. Another area later on forces you to go quite a distance through a large number of enemies and then fight one of the hardest bosses in the game just to get to the next bonfire. Dark Souls 2 becomes a bit of a grind in these instances, but there is one change to the formula that eases the pain a bit. After you kill enemies a dozen or so times, they stop respawning when you rest at a bonfire. As a result you won't have to keep fighting them, but it also means you can't farm them for souls in order to level up.

All videos for Dark Souls 2 (7)
Advertisement ▼