The infamous boss fights are another component that don't compare favourably with the previous game, with most bosses lacking the creativity and menace. There are seemingly endless iterations of the lumbering big dude wearing armor, who generally make for an easy fight once you take a minute to learn the attack patterns. There are a few challenging bosses, but they often rely on forcing you to fight multiple people/beasts at once instead of creating a single boss with unpredictable attacks. There is nothing here as edge-of-your seat exciting as Ornstein and Smough or as visually imposing as the Gape Dragon. I found myself getting through about half of the boss fights on my first or second try, and by later in the game the knot of dread I used to feel when entering a fog door had turned to passive curiosity.

Fortunately the gameplay itself remains strong enough to make up for most of these deficiencies. Combat feels weighty and precise, while improved lighting and sound effects make spells an enjoyable option if you don't mind kiting your enemies. There are a few changes to the formula that help differentiate the moment to moment gameplay from the previous Souls entry; every time you die when hollow, you lose a bit of health. You can also be invaded while hollow, so the game is clearly pushing you to remain human as much as possible even though human effigies, the new humanity-restoring item, are quite limited in supply. Building an effective character through careful choice of equipment and use of souls is immensely satisfying, especially when you return to a previously troublesome area and go through it with relative ease. 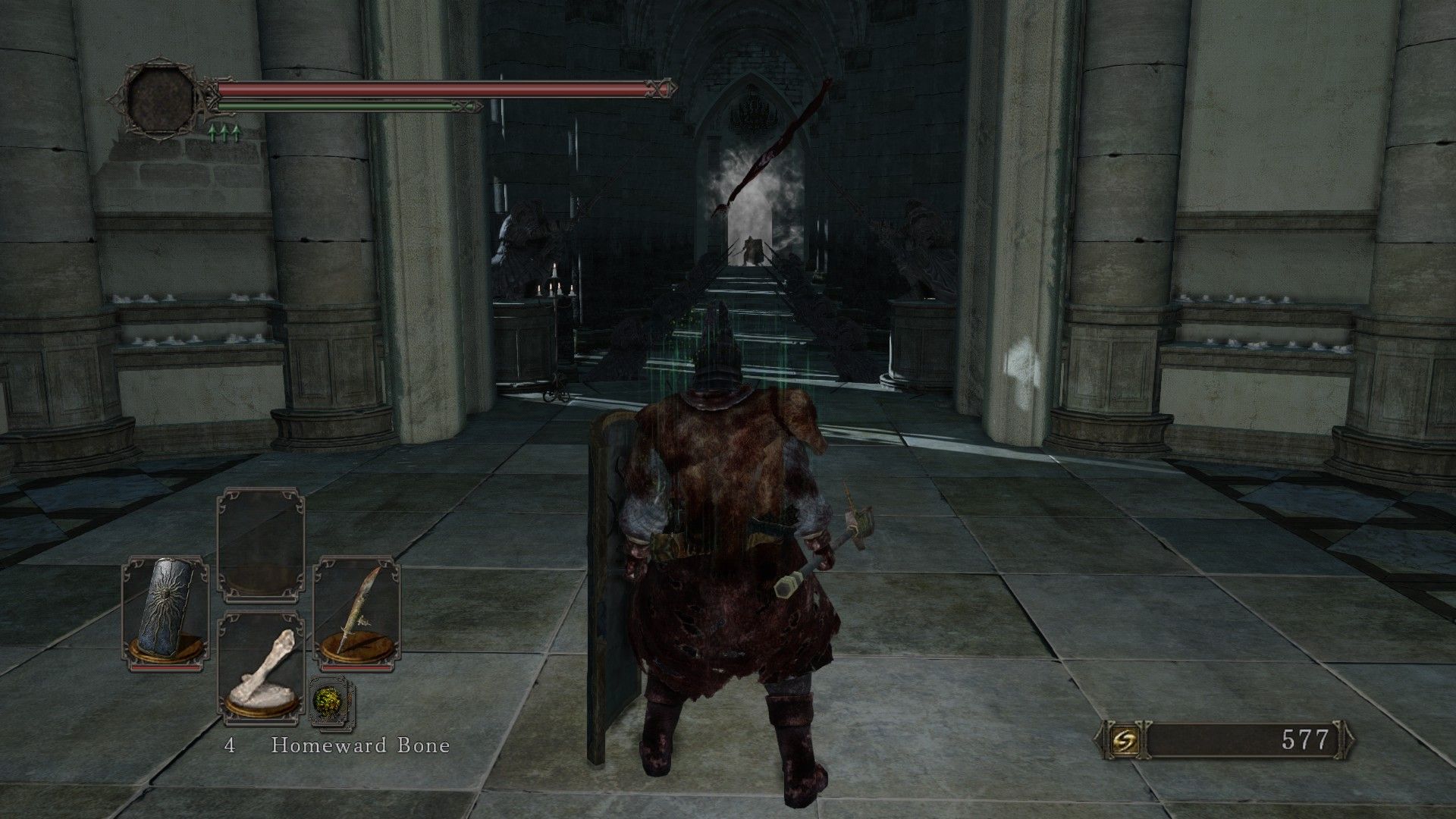 There are still a few rough patches in the gameplay that take you out of the experience. Most objects have geometry that extends past their visual edge, so shooting arrows through a door or near a wall will often see them getting stuck in what appears to be open space. Enemy AI can be quite buggy; they will sometimes run into walls and get stuck, and can often be baited into falling off cliffs or into holes so you don't have to really fight them. There are a few improvements as well however; while the jump controls remain cumbersome and unwieldy, there is way less of the janky platforming that was such a pain in the first Dark Souls. Boss arenas also tend to be a bit bigger, so you won't have to fight the camera as much as in some of the more claustrophobic fights of Dark Souls 1. The camera and lock on system can still be a bit finicky, but it feels improved overall.

The multiplayer aspects of Dark Souls 2 have been fleshed out significantly. Covenants are much more prominent here and have a large impact on the gameplay, with most relating to multiplayer in one way or another. One covenant encourages members to defend a bell in a certain area, meaning non covenant members who venture in will be constantly invaded. Other covenants grant members glowing summon signs or allow them to drag other players into their game for a sort of reverse invasion. Summoning others to help with a tough boss fight, or helping others take down a boss they are struggling with, grants a good source of camaraderie and helps you feel a bit less alone. Successfully helping another player defeat a boss will restore your humanity, creating concrete incentive to help your fellow players. The whole system of players leaving messages on the ground remains intact, along with other players' bloodstains which showcase their deaths, leading to very helpful and darkly humorous moments throughout the game. 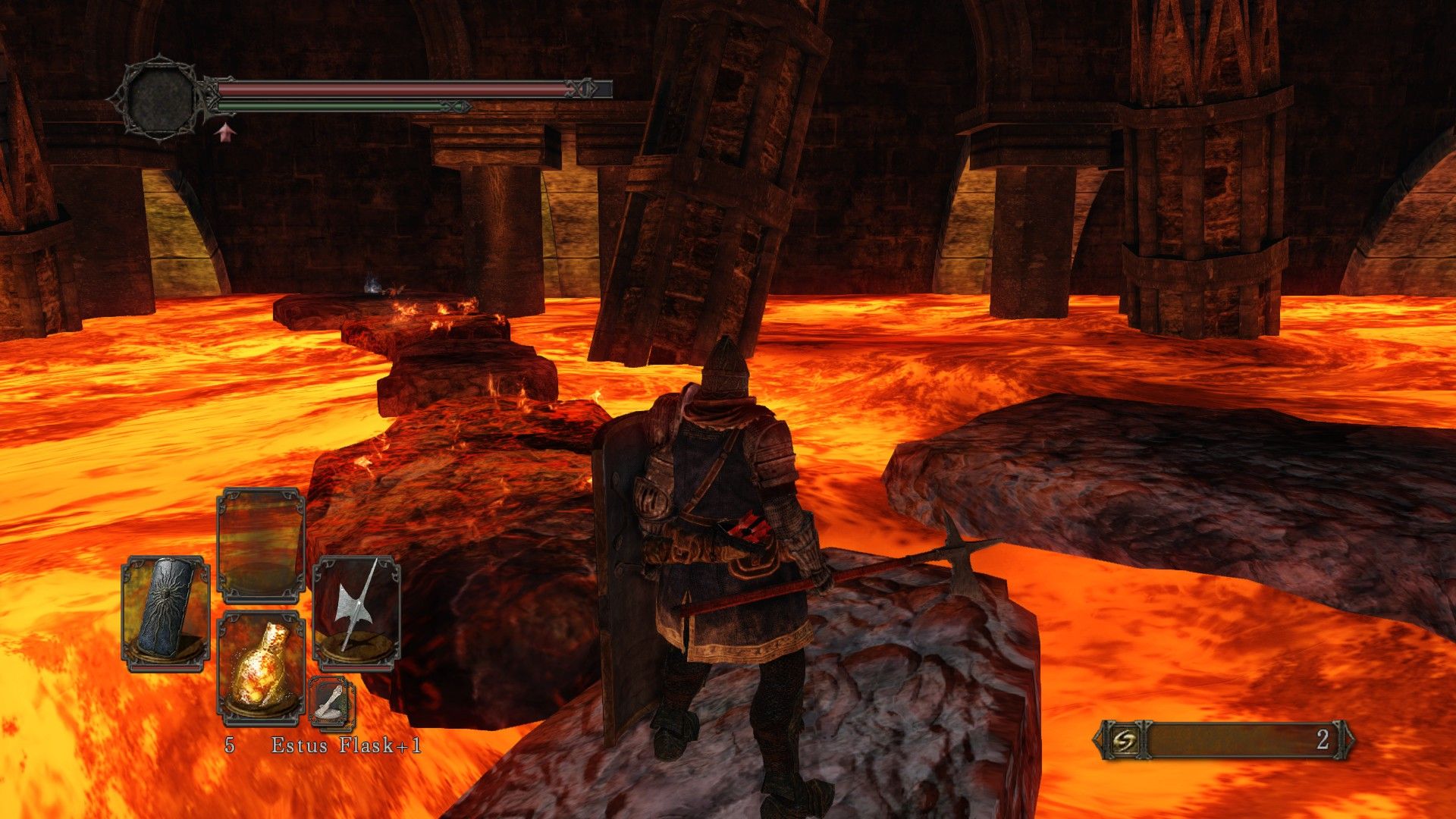 Dark Souls 1 on the PC was a terrible mess of a port, and I am happy to say that the sequel is much better in this regard. You will no longer be forced to play at 720p/30fps without mods, and the options menu is far more comprehensive. The game also seems to be very well optimized; I never experienced a single frame rate drop or crash with the settings turned all the way up. Keyboard controls have been improved, but are still not great due to jerky camera movement and odd button assignments. Rebinding the keys and tinkering with mouse sensitivity helps make it playable, but using a controller remains the best way to go.

The visuals themselves are slightly improved over the first Dark Souls, but still fall behind industry leaders considerably. Textures are generally sharp and character models are mostly quite detailed, but the lighting is very inconsistent. Some areas are vibrantly lit, while others look very flat and uninteresting. One of the first items you find in the game is a torch, which can be used to light various objects within the environment. This helps to liven things up a bit, although you will quickly find that using the torch has significant drawbacks compared to using a shield or duel wielding weapons. The audio quality remains high, with weapons sounding meaty and environmental sounds being crisp and detailed. Music is used minimally, being relegated to boss fights and the discovery of new areas, although it works well at these times. 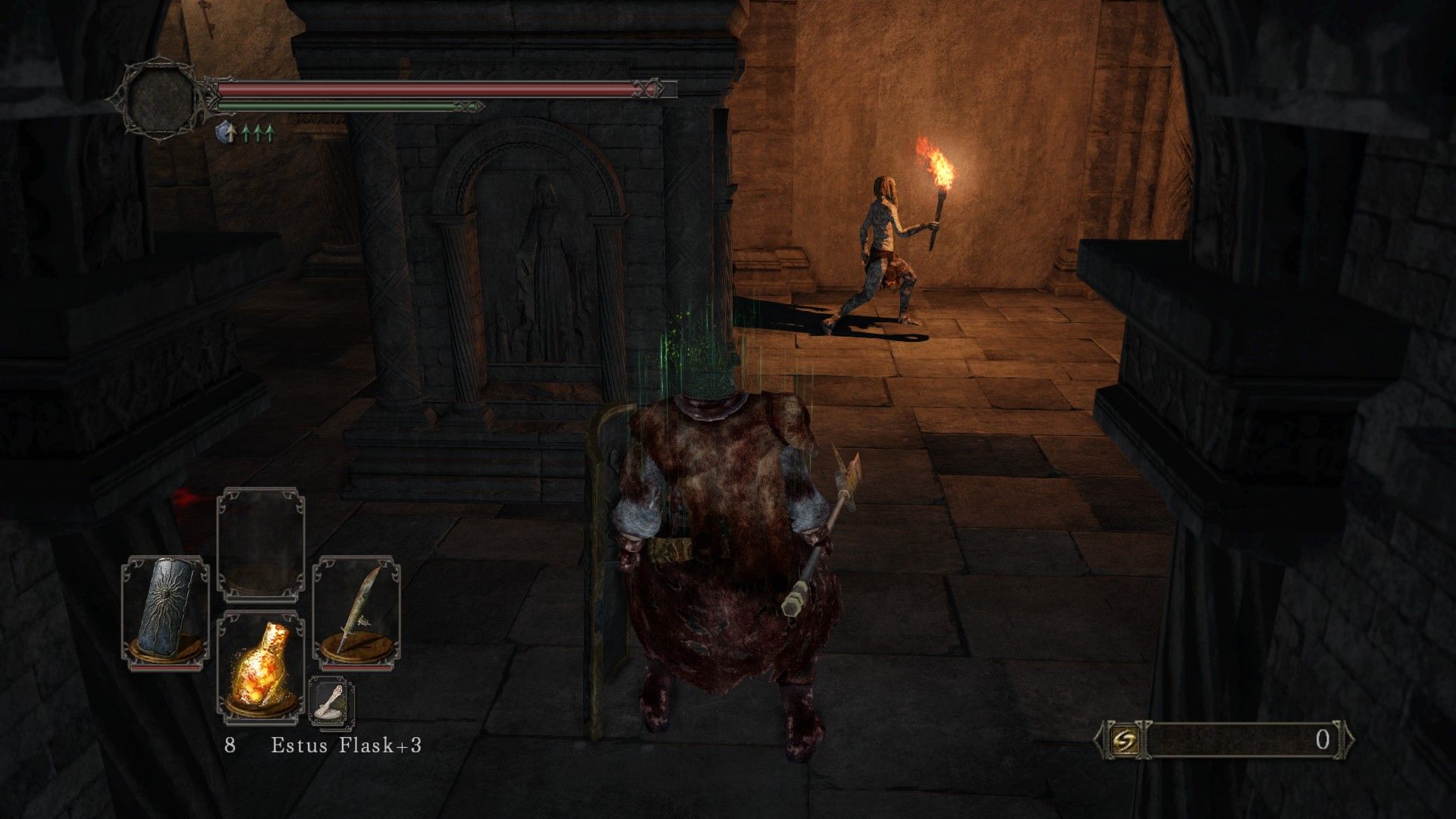 Torches add some life to the game's often drab lighting

I felt the first Dark Souls on the PC to be a diamond in the rough; an artistically made RPG with some miserable platforming, a few poorly designed boss fights and serious technical issues. The sequel is no longer rough, but I don't think it's a diamond either. Dark Souls 2 successfully mimics the design of the original while fixing a few problems, but also fails to capture the heart of the first game. It's a big, deep, challenging action RPG that will consume inordinate amounts of your time, but you won't feel quite as satisfied walking away from it as you did after finishing the original game for the first time. Fans of the series should absolutely pick this game up, but if you didn't fall in love with the first Dark Souls after giving it a fair try, this sequel will not change your mind.

Prev12
Our ratings for Dark Souls 2 on PC out of 100 (Ratings FAQ)
Presentation
75
Competent but occasionally bland visuals and environments, strong audio design and an improved user interface.
Gameplay
85
The combat remains deep, challenging and satisfying, although boss fights feel watered down and some areas are not very well designed with the difficulty feeling contrived.
Single Player
70
A gigantic, flabby series of seemingly disconnected levels that vary wildly in quality set to a needlessly cryptic story.
Multiplayer
75
PvP and co-op have been fleshed out thanks to the new covenant system, blood stains and messages left by other players help guide you through the world even when playing alone.
Performance
(Show PC Specs)
CPU: Intel i5-2500k @ 3.3ghz
GPU: EVGA GTX 670 FTW 2GB
RAM: 8GB DDR3
OS: Windows 7 Ultimate 64 bit

82
Despite mediocre keyboard controls and minor connection issues with online play, the game runs beautifully.
Overall
78
Another big, deep, engrossing action RPG in the Souls series that is more polished but ultimately weaker due to a fractured world, lack of direction, uneven difficulty and uninspired boss fights.

All videos for Dark Souls 2 (7)
Advertisement ▼