Players can Tee Off against golf's greatest Icons

Electronic Arts has announced that Tiger Woods PGA TOUR 14 has shipped in North America and will be available worldwide starting on March 29.

This year's release features a new game mode, Legends of the Majors, with six different eras of golf and period specific equipment, night golf and for the first time in franchise history the chance to go for the Grand Slam by playing historical events in all four majors.

The game also has 20 on-disc championship courses, over 35 playable golfers representing both the PGA TOUR and LPGA, updated online connected experiences and a host of community-driven gameplay enhancements.

Tiger Woods PGA TOUR 14 is available on the Xbox 360 and the PlayStation 3, including support for the Kinect and PlayStation Move.

Syndicate
Online
There are currently 0 members and 105 guests on the website right now. Who's On?
Activity in the past 10 minutes: 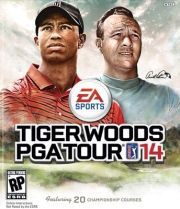