Bethesda Softworks has announced that the co-op fantasy action game, Hunted: The Demon’s Forge, is now available in North America and will go on sale across Europe on June 3.

Set in a dark fantasy world, Hunted is a cooperative action game, pitting you and your partner against waves of vicious enemies. Taking control of either E’lara, a ranged weapon expert, or Caddoc, a master swordsman, you must use a variety of weapons, powerful spells, and cover tactics to battle your way through menacing dungeons, overgrown ruins, and downtrodden towns.

Hunted has been rated M for Mature by ESRB. Developed at inXile Entertainment, Hunted is available on the Xbox 360, PlayStation 3, and Windows PC.

Counter-Strike: Global Offensive
Online
There are currently 0 members and 134 guests on the website right now. Who's On?
Activity in the past 10 minutes: 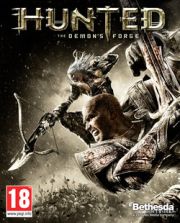 All videos for Hunted: The Demon's Forge (1)