Electronic Arts has announced that EA Sports PGA Tour will be launching on March 24, 2023 for PlayStation 5, Xbox Series X|S and PC.

Featuring ShotLink powered by CDW and TrackMan, Pure Strike feature helps ensure that each professional golfer’s unique swing and attributes will be accurately reflected in the game. In addition to being the exclusive home of all four men’s majors, the game will also include 30 famous courses, an RPG-like progression system in the career mode, THE PLAYERS Championship and FedExCup Playoffs, Ladies Professional Golf Association (LPGA) and The Amundi Evian Championship, and more.

EA Sports PGA Tour 2023 is the first title in the series since Rory McIlroy PGA Tour in 2015. Prev:
Returnal out on PC next month
Next:
Age of Wonders 4 announced

S.T.A.L.K.E.R.: Call of Pripyat
Online
There are currently 0 members and 120 guests on the website right now. Who's On?
Activity in the past 10 minutes: 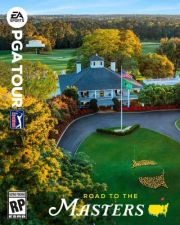