IIHF Women’s National Team members can now play alongside men in a Hockey Ultimate Team (HUT) lineup. After their introduction last year, national teams will continue to play a prominent role in NHL 23, as national team players will have both base and master items incorporated into HUT events.

NHL 23 also promises the introduction of cross-platform matchmaking, currently planned for November 2022. The launch of cross-platform matchmaking across same-generation consoles for World of Chel and HUT will shorten queue times and create fewer player pools. Also following a November update, players who start playing NHL 23 on PlayStation 4 or Xbox One will be able to transfer their HUT Team value and progress to the next generation of their respective console platforms.

Developed by EA Vancouver and EA Bucharest, EA SPORTS NHL23 will be available on October 14, 2022 on PlayStation 5, Xbox Series X|S, PlayStation 4 and Xbox One. NHL 23 out now
Prev:
NHL 23 announced
Next:
The Dark Pictures: The Devil in Me out in November 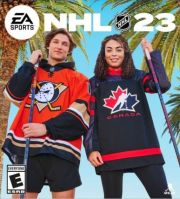