This fall, living room legends and their friends will join together and embark on an epic rock journey to save rock n’ roll with Activision's Guitar Hero: Warriors of Rock. The latest installment in the world’s most popular music game series, Guitar Hero: Warriors of Rock, will once again redefine music gaming with an all-new, story-driven Quest Mode, a completely redesigned rock-inspired guitar controller, the biggest on-disc selection of rock music ever in a Guitar Hero game and Quickplay+, which invites challenge-starved fanatics to test their rock skills in any of the on-disc or over 500 songs in the Guitar Hero Music Library.
“Guitar Hero has set the standard for music based gaming and with Guitar Hero: Warriors of Rock’s all-new Quest Mode, robust and authentic set list, over-the-top challenges and rock-inspired new hardware, we are once again bringing the soul and energy of rock n’ roll to fans around the world,” said David Haddad, Chief Operating Officer, Guitar Hero.
In Quest Mode, using any combination of instruments, players will embark on a larger-than-life, epic rock journey from the stage of CBGBs, the infamous punk-rock club in New York City, to the molten lava fields of rock treachery as eight Guitar Hero characters transform into rock warriors that must join together to use their unique, game-changing powers to help the Demi-God of Rock take down “The Beast” and save rock n’ roll.

Guitar Hero: Warriors of Rock breathes new life into gamers’ current Guitar Hero music libraries providing literally hundreds of hours of replayability with the introduction of Quickplay+, which features 13 totally unique gameplay challenges for every on-disc track as well as most downloadable and importable songs from Guitar Hero World Tour forward. Gamers will complete challenges such as Band Streak, High Score and Power Challenge, which allows players to choose any two warrior powers they have unlocked to try and earn ridiculously high scores, to rank up and unlock more rewards and content than ever before. All-new Challenge Leaderboards have been created in order to capture the outrageous scores that are capable with Quickplay+.
Delivering the largest on-disc rock music set list to-date, Guitar Hero: Warriors of Rock features more than 90 tracks that include guitar shredding hits from bands such as Black Sabbath, Megadeth and Slipknot and larger than life anthems from Queen, Muse and KISS. Additionally, Dave Mustaine of Megadeth wrote and recorded “Sudden Death,” an original track for the game, which was inspired by Quest Mode’s storyline. Along with original songs, the set list also includes special re-records by famous artists and tracks from bands that are making their music video game debut.
To maximize players’ shredability, Guitar Hero: Warriors of Rock delivers the next evolution in finger-fretting with an all-new, show-stopping guitar controller that was inspired and born from the game’s unique art style and specifically made for shredding.
Guitar Hero: Warriors of Rock is being developed by Neversoft Entertainment for the Xbox 360 and the PlayStation 3; and by Vicarious Visions for the Wii. The game is rated “T” (Teen – Lyrics, Mild Fantasy Violence and Mild Suggestive Themes) for the Xbox 360 and PlayStation 3. The Wii version is not yet rated by the ESRB. 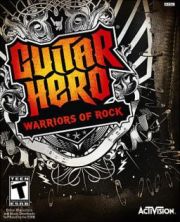 All videos for Guitar Hero: Warriors of Rock (1)