Free Batman DLC coming soon - Sep 8, 2009 19:11
Free DLC will be available to coincide with the release of the PC version of the game 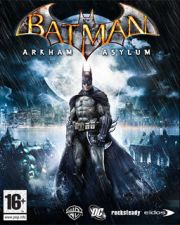