Raskulls is an action platform game video game independently developed by Halfbrick and published by Microsoft Game Studios for the Xbox 360 via Xbox Live Arcade. In Raskulls players must navigate through platform-based levels filled with blocks of varying shape and size. The characters must use their brick-breaking wands to create the fastest route to the end of the level. 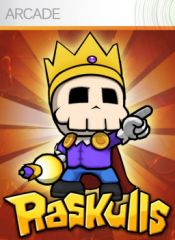 Our Review of Raskulls
65%
Adequate
The Verdict:
"A simple puzzle platformer with good production values that can't save it from mediocrity"
Game Ranking
Raskulls is ranked #1266 out of 1686 total reviewed games. It is ranked #98 out of 107 games reviewed in 2010.
1265. Duke Nukem Forever
PC
1266. Raskulls