Costume Quest is a adventure role-playing video game developed by Double Fine and published by THQ. In the game, the player controls a child that is trick-or-treating with his or her younger sibling on Halloween night when they encounter a monster that kidnaps the sibling, thinking the candy-corn outfit is really candy. 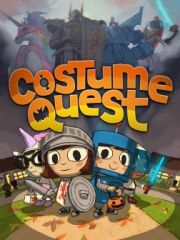