Age of Wonders 4 invites players to rule a fantasy realm of their own design, in a blend of strategy, role-playing, and turn-based combat. Powerful Wizard Kings have returned to the realms to reign as gods among mortals, and players will rise to challenge their rule using Tomes of Magic to unleash arcane destruction and evolve their armies, gaining new abilities and forms. 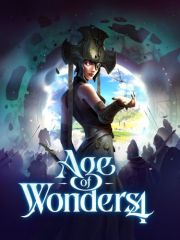