ModNation Racers is a PlayStation 3 exclusive Kart Racing game featuring all the track-based driving and comic combat players cherish in the genre, blended with extreme customization and user generated content expected of a modern online multiplayer title. In it players can expect exceptional kart handling and physics technology, including drifting, jumps and boosting and easy to master customization options covering in-game racers, their karts and the tracks that are raced on. 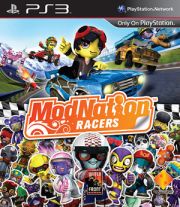