In the highly anticipated sequel to the best-selling Sony PlayStation 3 game, Resistance 2 is an alternate-history, first-person shooter that puts you in the heroic role of Sgt. Nathan Hale as he struggles against overwhelming odds to defend humankind from an insurmountable Chimera.
Resistance 2 takes up right where Resistance: Fall of Man left off. Hale is kidnapped by a black ops group in London and forced to Iceland for research testing. The full scope of what happens in Iceland is a mystery, but the game reveals that as Hale wrestles with the insidious Chimera war machine, he must also battle the virus raging inside his body that threatens to transform him into the very creature he fights against. 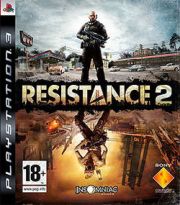 Our Review of Resistance 2
81%
Great
The Verdict:
"The sequel surpasses the original in many ways, but stumbles on some of the new content"
Game Ranking
Resistance 2 is ranked #385 out of 1841 total reviewed games. It is ranked #15 out of 28 games reviewed in 2008.
384. Red Faction: Guerrilla
PC
385. Resistance 2