Also known as: RFoM
In Resistance: Fall of Man, US and British forces band together in a last-ditch effort to save England from a horric scourge -- the Chimera. This parasitic species infects other life forms with a virus that rapidly mutates victims into new Chimera. In mere decades this race has ripped apart populations across Asia and Europe and by 1951 has landed on the shores of England. You play the part of US a Army Ranger, fighting alongside a group of British resistance soldiers to free the country from the Chimera and to halt their spread across the globe. 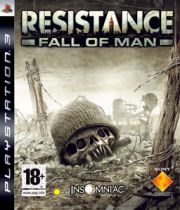