Also known as: Half Life
In Half-Life, players assume the role of Dr. Gordon Freeman, a recent graduate theoretical physicist who must fight his way out of a secret underground research facility, whose research and experiments into teleportation technology have gone wrong.
Guinness World Records awarded Half-Life with the world record for "Best-Selling First-Person Shooter of All Time (PC)" in the Guinness World Records: Gamer's Edition 2008. 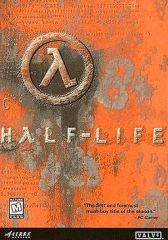