Also known as: Fable II
Fable 2 is the anticipated sequel to the popular original that sold more than 3 million copies. Created by famed game designer Peter Molyneux, Fable 2 for Xbox 360 features an epic story that picks up 500 years after the first game. It offers an open world environment giving players a massive amount of freedom to explore and play as they please, with every decision made contributing to the game itself. 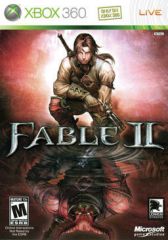