In Just Cause, you take on the role of the flamboyant Rico Rodriguez - a specialist in regime change. The island of San Esperito is suspected of stockpiling WMDs and it's your job to negate the threat to world peace. This little tropical paradise is about to implode as various factions vie for power. Play the island's factions off against one another; incite a rebellion among the masses; or build alliances with rebel forces and drug cartels. Explore over 250,000 acres of mountains, jungles, beaches, cities, and villages. The island can be explored by land, sea, and air -- at your disposal is one of the most varied and exciting array of vehicles ever seen in a video game. Wealth of missions side-missions, bonus missions, and many more -- plenty of action throughout the islands Your support team, Sheldon and Kane, provide you with reconnaissance info, extraction and vehicle drops 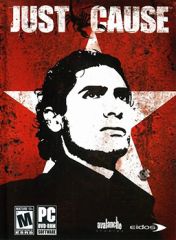