In Renegade Ops you must defeat Inferno, a madman intent on global domination. Destroy enemies across a range of stunning environments using a wide variety of vehicles. Players have the choice to fight alone in single player mode, team up offline with two-player split screen or join the dynamic 4-player online co-op experience. Blast your way through enemy lines by working together, or compete for achievements as you and your friends aim to top the online leader boards. 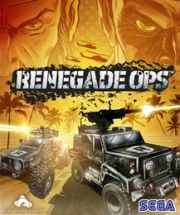 Our Review of Renegade Ops
82%
Great
The Verdict:
"A top-down vehicle shooter that has some annoyances but is fun overall"
Game Ranking
Renegade Ops is ranked #358 out of 1856 total reviewed games. It is ranked #45 out of 105 games reviewed in 2011.
357. Counter-Strike: Global Offensive
PC
358. Renegade Ops