Also known as: GW F
When NCsoft released the original in 2005, it promised a revolution in Massively Multiplayer Online games: an online game with no monthly fees and completely standalone expansion packs. With simple gameplay, and endless multiplayer and solo options, the first game gained a devoted following of experienced and new players alike. Exactly one year later, Guild Wars Factions widens the horizons of Guild Wars, almost doubling the size of the world. The expansion pack offers whole new worlds to explore, and it doesn't require Guild Wars to play. Players can explore the new continent of Cantha by traveling from the lands of Tyria or they can travel in Cantha alone--and even those who only own one of the Guild Wars games can invite their friends to join their questing areas and share the game content without forcing each other to buy the other game. 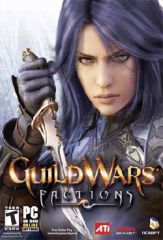