Angry Birds Star Wars is an action video game, a crossover between the Star Wars franchise and the Angry Birds series of video games. The game combines elements of both Angry Birds and Angry Birds Space, featuring levels that take place on both standard terrain and in outer space. With the exclusion of Blue Bird, all the Birds are given new powers not yet seen before in a canon Angry Birds title, some of these that are upgraded as the game progresses further. 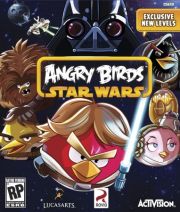