Defiance is an online open-world shooter that interconnects with a television program on Syfy. Join a futuristic online open-world shooter where thousands of players scour a transformed Earth competing for alien technology. The game combines the action of a console third-person shooter, with the persistence, scale, and customization, while its TV counterpart exudes the scope, story, and drama of a sci-fi story. 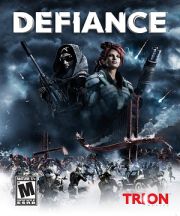