Rainbow Moon is a strategy role-playing game with a strong emphasis on exploration, character development and turn-based battles. The game borrows heavily from the dungeon crawling genre while the player traverses the game world, but incorporates elements from tactical role-playing games when enemies are engaged in battle. 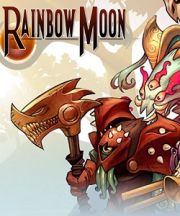