Baldur's Gate is a role-playing video game developed by BioWare and released in 1998 by Interplay Entertainment. The game takes place in the Forgotten Realms, a high fantasy campaign setting, using modified Advanced Dungeons & Dragons (AD&D) 2nd edition rules. The story follows the journey of the player character along the Sword Coast, which lies on the west coast of the continent Faerûn, as he or she grows up following the cataclysmic Time of Troubles. Character development occurs through dialogue and battle. The game rewards the PC according to his or her moral choices. 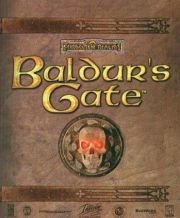