The X-Men saga continues with the X-Men Origins: Wolverine video game for the Xbox 360, based on the feature film of the same name. Unleash the fury of Wolverine and see how it all began. With cinema-style graphics and sound, and unstoppable action and excitement, X-Men Origins: Wolverine will have you on the edge of seat as you slash, slice, and stab your way through level after level of intense, epic gameplay. 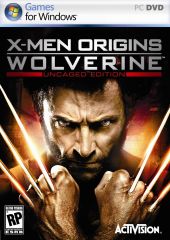