A competent hack and slash adventure that lacks ambition

It was a bit of a surprise when Crytek revealed Codename: Kingdoms as an Xbox 360 Kinect title at E3 2010. It was the first game from the developer exclusive to a platform; however the usage of Kinect mandated it to be so. Much has changed since then, and instead of a gimmicky motion controls showcase, Ryse: Son of Rome is a full-fledged, action packed launch title on the Xbox One. Although its story and gameplay are fairly basic and multiplayer unchallenging, this is a graphical powerhouse for Microsoft’s new console that offers a few moments of violent fun.

You are Marius Titus of Rome. Having watched your family killed by invading barbarians in your own estate, you make a pledge to fight the enemies of Rome and seek revenge for as long as it takes. As the invasion causes chaos in Rome, you cross paths with Vitallion, a friend of your murdered father, who recruits you to the 14th legion. The legion follows Barbarians to their territory in Brittany, where Marius successfully leads a Roman invasion by sea and is promoted to Centurion for his combat skills and leadership. 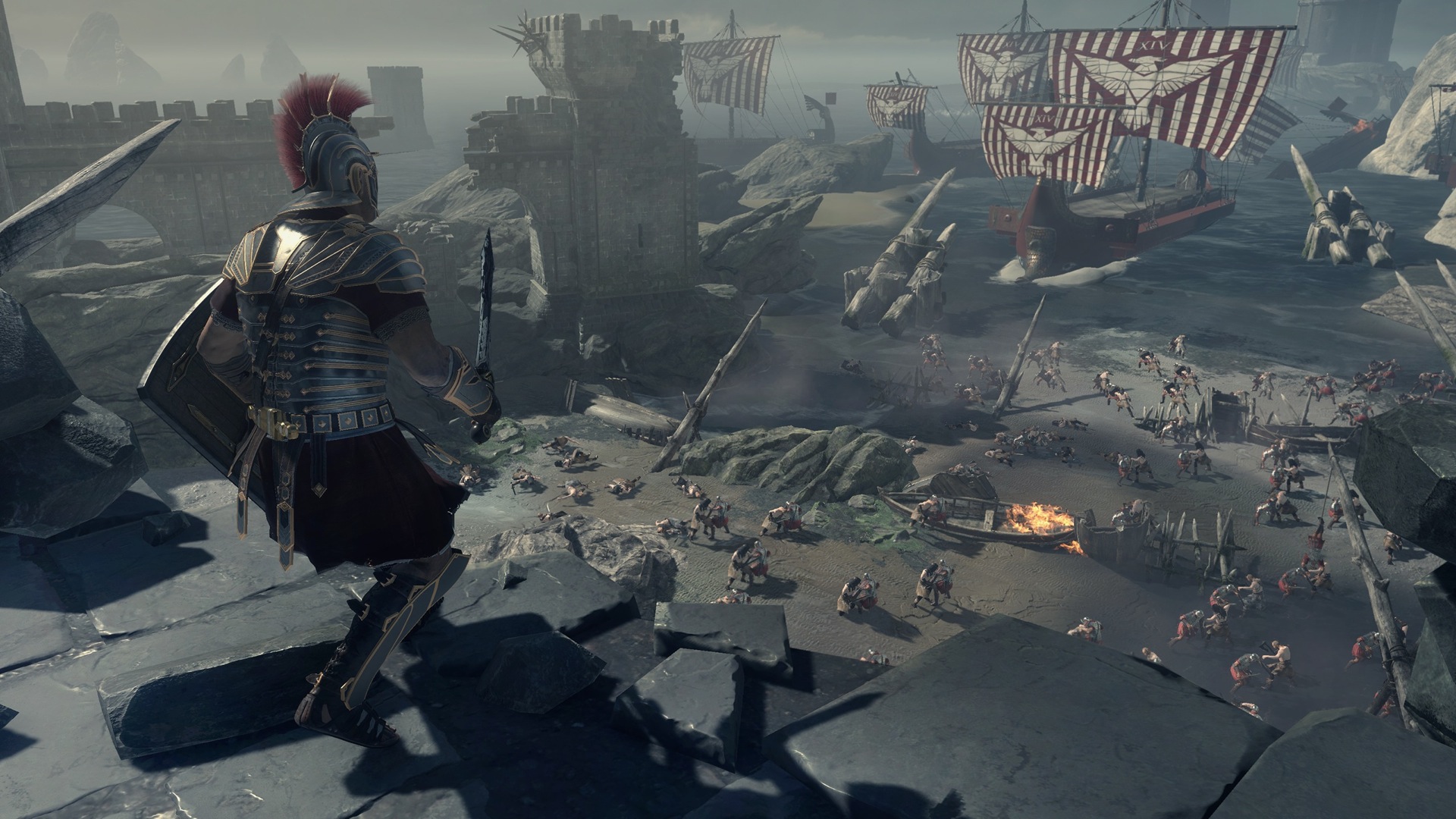 Most of the game is spent trekking through these Barbarian lands, killing many foes and losing many Roman soldiers in the process. The plot is quite cliché for the given era, with corrupt officials, spoiled rulers, backstabbing, and classic revenge motivations. It’s entertaining enough to see you through the 5 to 6 hour campaign, and doesn’t have too many glaring plot holes. The ending chapter comes as a bit of a surprise however, with sudden realizations as to the motivations of war, muddled inspirations of heroes, and deeper messages similar to those seen in Spec Ops: The Line. It’s not enough to make up for the rest of the predictable story, but at least the game ends on a high note.

Ryse is a linear experience, with a few corners or side paths that hide collectible items in the game world. Most of your time will be spent in melee combat, where the game is fairly repetitive in its mechanics. Wielding a shield and a sword through the whole experience, Marius has a basic attack, a counter-attack, a shield bash, and a dodge move. Each of these four actions are assigned to a corresponding face button, and that’s all that you’ll be working with. Hacking at enemies with the sword will only work so far, as stronger foes begin to dodge and block. In that case, you must use the shield bash (or a stronger variation, by holding down the button) to break their defenses and get a few hits in. There is also an ability to throw spears at foes, but the aiming system is rather poorly implemented and controls too awkwardly to be effective. 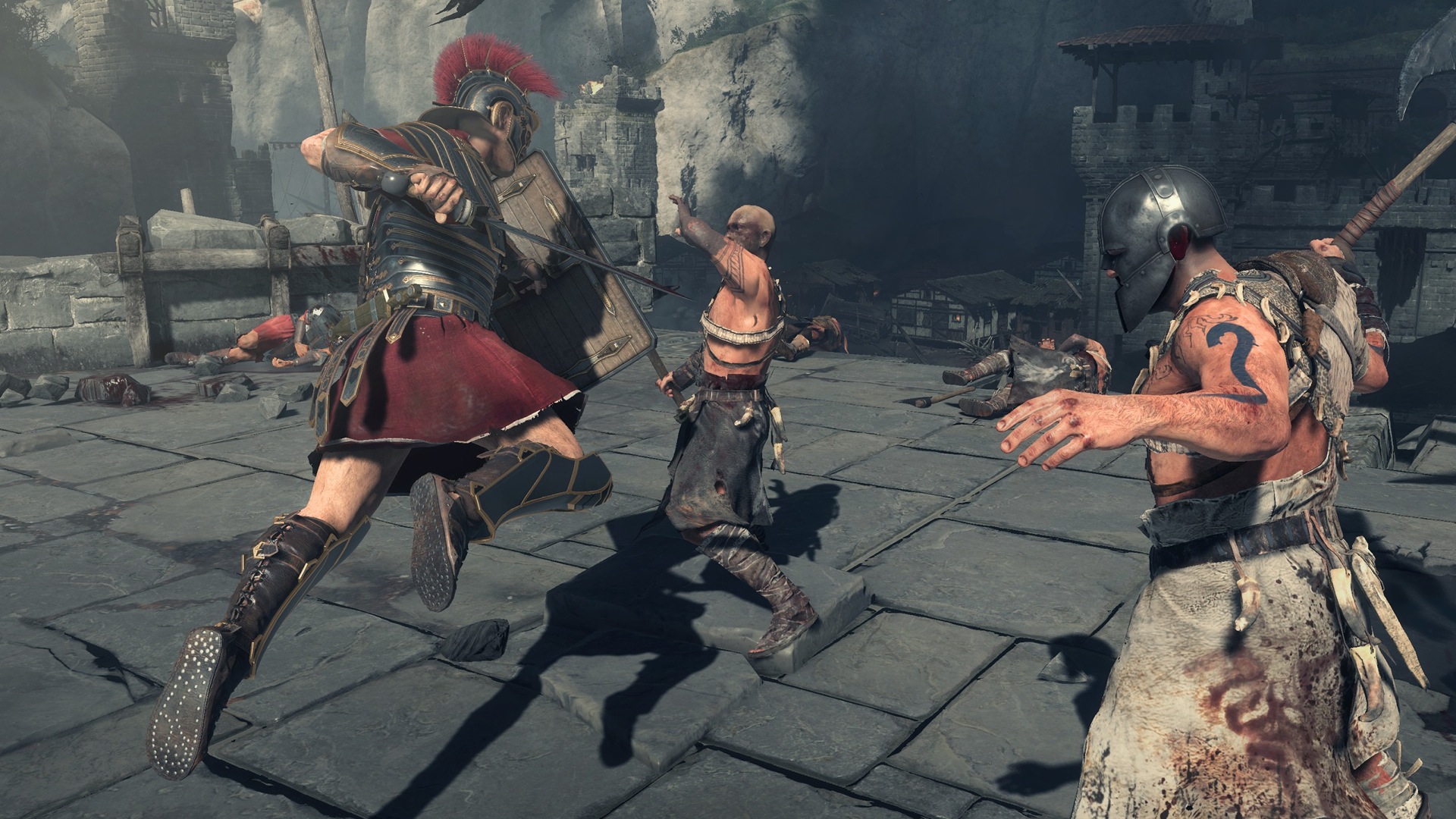 Dodging or parrying attacks and hacking away is how you’ll spend most of your time. On occasion, enemies will glow red which means that the attack cannot be parried and must be dodged, and that’s how most boss battles play out. The more satisfying element of the action are the slow motion, violent executions. Once an enemy has been hurt enough, an icon appears above their head that lets you press a trigger button to utilize a quick time event. The enemy will then glow either blue or yellow (corresponding to X and Y buttons) so you can finish them off in style. Once an execution is triggered, you can press the wrong button or none at all – but the finishers will still happen and enemy will be killed. The only incentive to get the QTE correct is ensuring your combat XP multiplier will carry on.

You’ve also got four special combat modifiers that can be swapped at any time. These either grant you bonus health, damage, focus time, or XP. The bonus health and damage are self explanatory. The Focus system acts as your special ability that exists alongside your health bar and can be triggered once the meter is full. Activating Focus slows down time around you, while you can hack away in real time. It’s a cool way to dispatch of a few foes while giving you time to recover from hectic combat. However it is limited by range, so if new enemies enter the battle they will head straight for you and ignore the activated ability. The Experience system is again fairly ordinary, letting you unlock new executions, boost your health and focus mode length and capacity, and more. You earn XP from kills and also keeping your multiplier up, by never getting hit and attacking enemies on regular basis. The unlocks and XP carry over should you wish to replay the game again on higher difficulties.

All videos for Ryse: Son of Rome (5)
Advertisement ▼