A competent hack and slash adventure that lacks ambition

When not in direct combat, you’ll sometimes have to organize an offensive or defensive military maneuvers, whether that means manning a ballista or strategically placing your men. The latter isn’t as exciting as it sounds – you usually just get two options, and it slightly affects the type and amount of foes that you have to fight anyway. When leading an offensive against archers with your men, you must use shields to avoid incoming fire, advance forward, and time your own spear throwing to eliminate the enemy. These scripted moments barely add diversity to the proceedings.

The action carries on fairly seamlessly into multiplayer. Ryse offers a two-player cooperative arena mode, taking place inside the Roman Coliseum, where you and another battle against waves of enemies. To keep things diverse, the inside of the arena changes into one of about 12 maps on offer. The fights carry on in much the same way as the campaign, except your combat modifiers must be selected before the battle, but behave in the same way. Each player can enter their own execution slow motion, without interfering with each other. Both players can benefit from Focus abilities, however. One unique combat ability in multiplayer is a coop execution, but these are tricky to time and don’t have much payoff beyond a new animation. 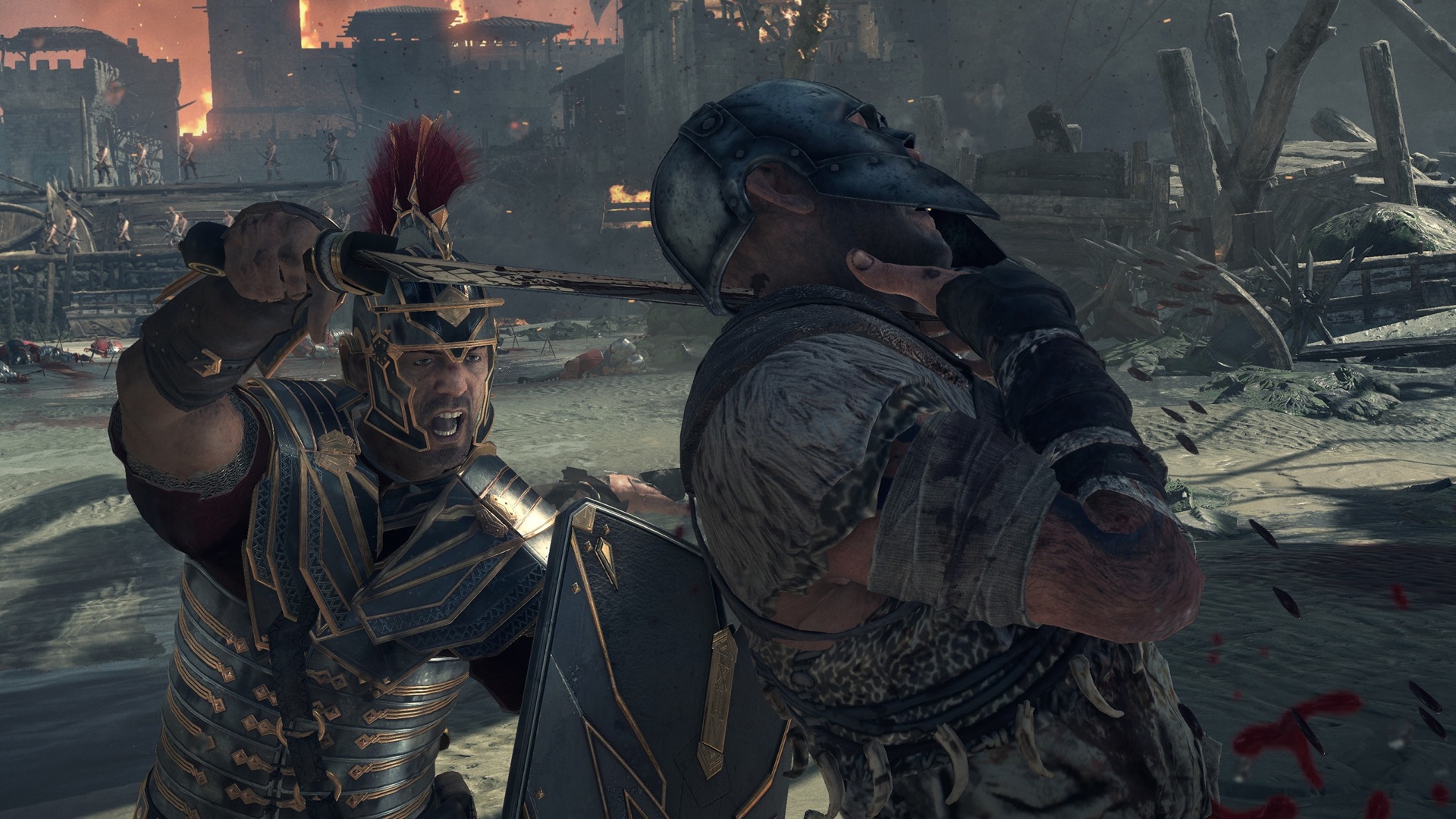 The XP multiplier during online mode comes from not only combat but also a crowd entertainment meter. Keeping the damage output high with lots of executions will keep the fans interested, thus increasing your payout at the end. The game once again hopes to break up the repetitiveness of the combat by offering simple objectives to keep players moving around the arena.

While it’s initially quite fun to slice and dice foes together, even though you’ve already done this for 5 hours in the campaign, the online component lacks staying power. There’s a separate XP system here with the ability to upgrade your gladiator’s armor and weapons, but it seems unnecessary. The reason being, there is no difficulty system, and as it stands, the multiplayer is easy. Simply choosing to side with the god that provides the health boost combat modifier, and even being a level 0 gladiator with starting gear, you’ll have no trouble clearing all arenas with a halfway decent partner. Should either of you fall, the other fighter can simply pick you up as many times as needed. With a lack of challenge, the progression system is rendered a bit meaningless. If you want to actually work for your triumphs, the game offers solo arena play – but that again undermines the whole idea of multiplayer. 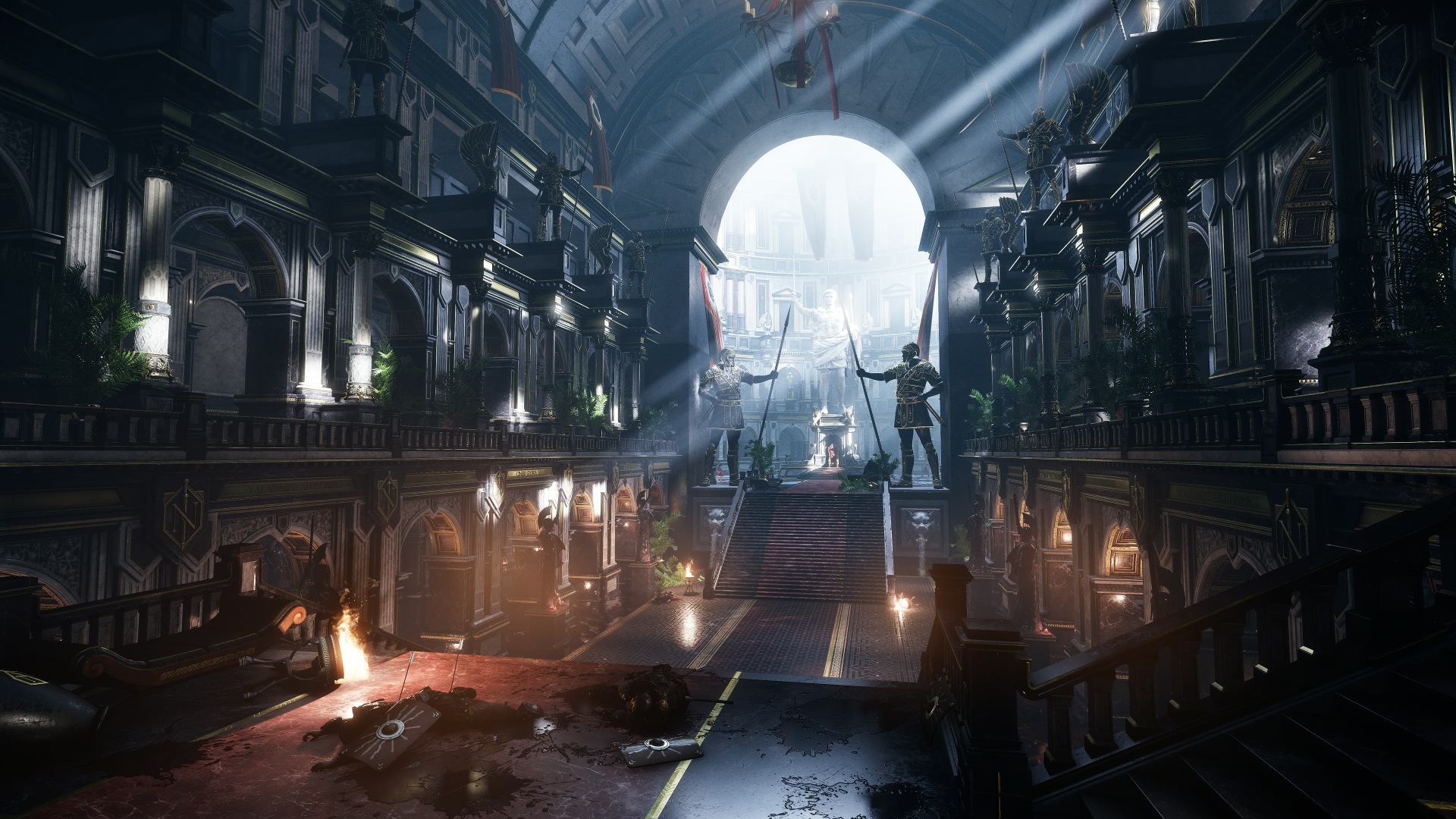 It wouldn’t be a Crytek title without impressive technical visuals. And Ryse: Son of Rome does look quite fantastic on the Xbox One. The environments aren’t particularly impressive, however distant vistas, character models and animations, especially during close-ups or seamless in-game cutscenes, are a wonderful sight. High level of detail and resolution, plus great facial animations make characters come to life and the violent, bloody slow motion executions will satisfy those looking for such a thrill. The soundtrack is fitting, though not particularly memorable; sound effects and voice acting are equally serviceable. With everything going on during larger battles, the game maintains a steady framerate. Issues exist on occasion, such as when physics go a bit wonky or a UI element may get stuck on screen.

Ryse: Son of Rome is an action packed adventure set in an era not oft seen in the video game space. The plot is by the numbers and the action can get repetitive, but action junkies with a weakness for violent slow motion sword executions will have a great time. The online component works, but suffers from some of the same repetition as the campaign, and is too easy, rendering progression and upgrade system needless. If anything, Ryse is a fantastic showcase of the Xbox One’s technical proficiency, with great visuals and animations. It’s not exactly revolutionizing the action genre, but the game offers just enough thrills to warrant a look for action fans.

Prev12
Our ratings for Ryse: Son of Rome on Xbox One out of 100 (Ratings FAQ)
Presentation
85
Showcases the power of the new Xbox One well, with detailed visuals and competent sound design
Gameplay
67
The violent executions are fun for a while, but the rest of the combat is lacking and begins to grow repetitive
Single Player
73
A fairly short and predicable campaign with a memorable ending
Multiplayer
58
Lack of combat depth don't do online play any favors, and there's little reason to upgrade your gladiator. Can be fun in short bursts.
Performance
80
Runs without major issues, aside from occasional physics glitch or stuck UI element
Overall
71
Ryse: Son of Rome is a decent action trip and a good addition for the Xbox One launch lineup, but on its own there's nothing particularly memorable to help stand the test of time.

All videos for Ryse: Son of Rome (5)
Advertisement ▼