A Zombie Sandbox for people with Braaaaiiins

While those interested in the burgeoning zombie survival sandbox genre have no shortage of titles to partake of, those seeking a solo experience have been left with few options, particularly on the PC. Multiplayer games inspired by the Arma 2 mod, Dayz, seem to be popping up everywhere but the appreciable potential for a singleplayer game that focuses on PvE rather than PvP has on the platform gone unfulfilled. State of Decay looks to cash in on this opening, offering up a sizable chunk of game world populated by zombies, AI survivors and lots of loot-filled buildings to scour. While there are more than a few rough edges in State of Decay and a lack of the heart-stopping tension found in Dayz, there is an engrossing and enjoyable game here with a lot of things to do given the low cost of entry. 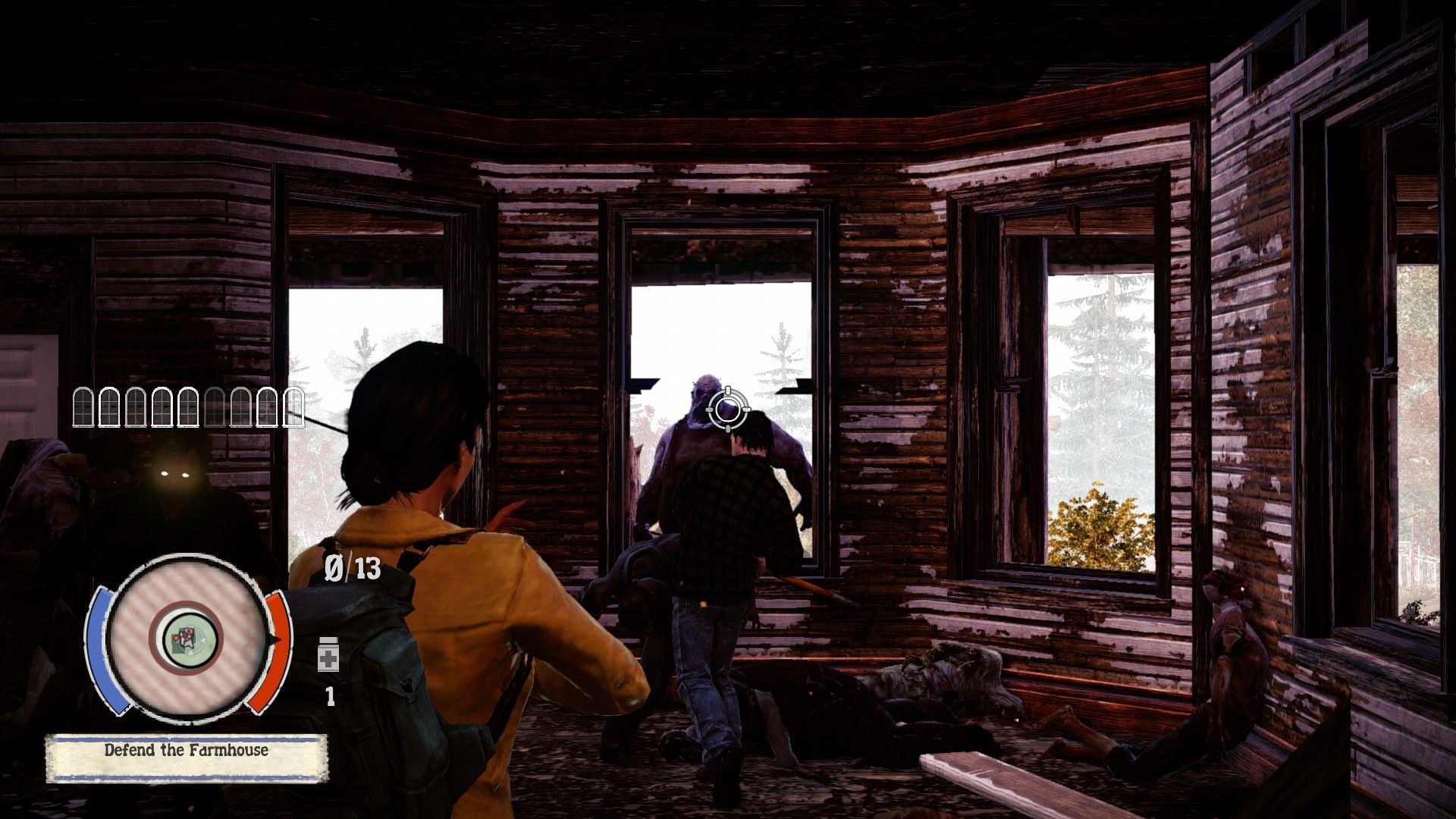 Threatening, but also too big to fit through the window

The start of the game sees you fighting zombies and completing simple fetch quests for a small group of survivors garrisoned in a ranger station. You are introduced to the combat and looting mechanics, but these only garnish the more engaging aspects of the experience. Soon you find yourself entwined with a larger group of survivors holed up in a church just outside a small town. This will serve as your base throughout most of the game as you earn the trust of fellow survivors, fortify your encampment and go out in search of supplies. Ensuring the well being of this group of survivors is ultimately what keeps State of Decay moving forward, as it provides good incentive for you to engage in the gameplay tasks which without context would be fairly banal.

After the opening sequence of the game, the constant flood of missions that you are informed of via radio chatter take a back seat to exploration and looting. Ensuring that your group of survivors have enough food and medical supplies will be the most pressing issue, and can be remedied by searching through houses which may contain zombies, supplies or occasionally survivors who can be convinced to join your group. You can climb tall objects and 'survey' the surrounding area, revealing locations of interest. Once inside a building, objects which contain items must be searched, and this takes several seconds to complete. Whether you try and sneak around avoiding combat with the walking undead, quietly scavenging what you need, or go in swinging to clear a house of its decrepit occupants before searching for goodies remains entirely up to you. You can radio home to request an AI survivor come out and pick up the supplies for you, but this requires clearing a location of all zombies first. 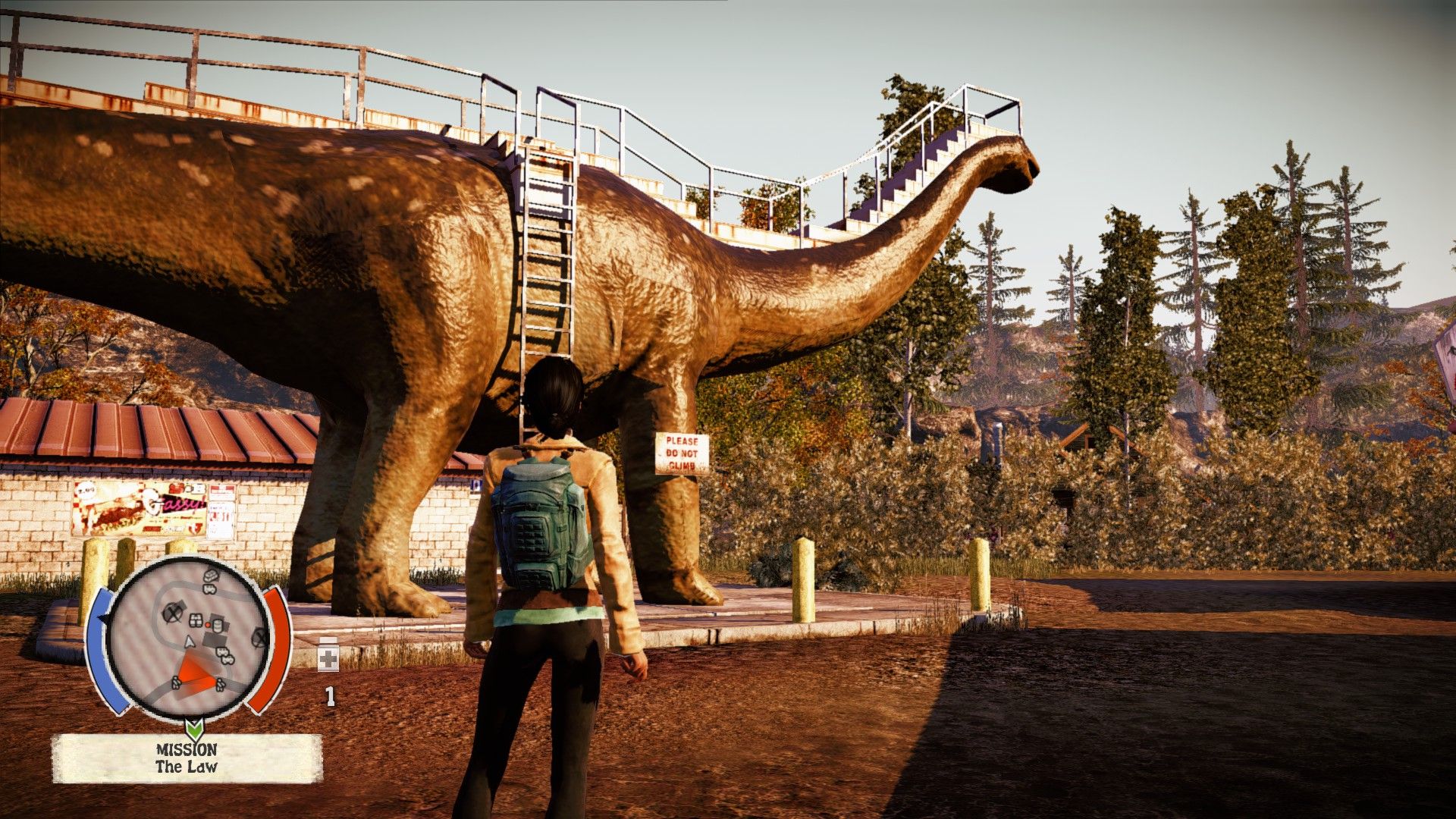 If you decide to clear a location of zombies before poking around for loot, the combat is functional but uninspired. With a melee weapon you swing away until either you run out of stamina, the zombies' heads explode or your weapon breaks. If you manage to knock a zombie down you can finish it off with a brutal swing of your chosen instrument of death, but most of the challenge lies in ensuring you don't get surrounded or backed into a corner. Firearms are straightforward and satisfying to use, although ammunition isn't readily available and firing a unsilenced weapon will attract nearby zombies, meaning they are best used only when the situation gets out of hand. Sneaking around zombies is a viable method, particularly when dealing with larger groups, and can be accomplished by takedowns from behind, distracting zombies with objects or using firearms with home-made silencers that only last for a set number of shots.

The zombies themselves shamble around convincingly enough, at least until they get stuck in the terrain which happens all too frequently. The undead will hop through windows, climb fences and grab you from behind as they endeavor to end your life. Special zombie types eventually start showing up, which range from the bullet-proof SWAT zombies to ones that explode in a cloud of poisonous gas when killed to hulking beasts that charge like bulls and sponge up a lot of firepower before going down. 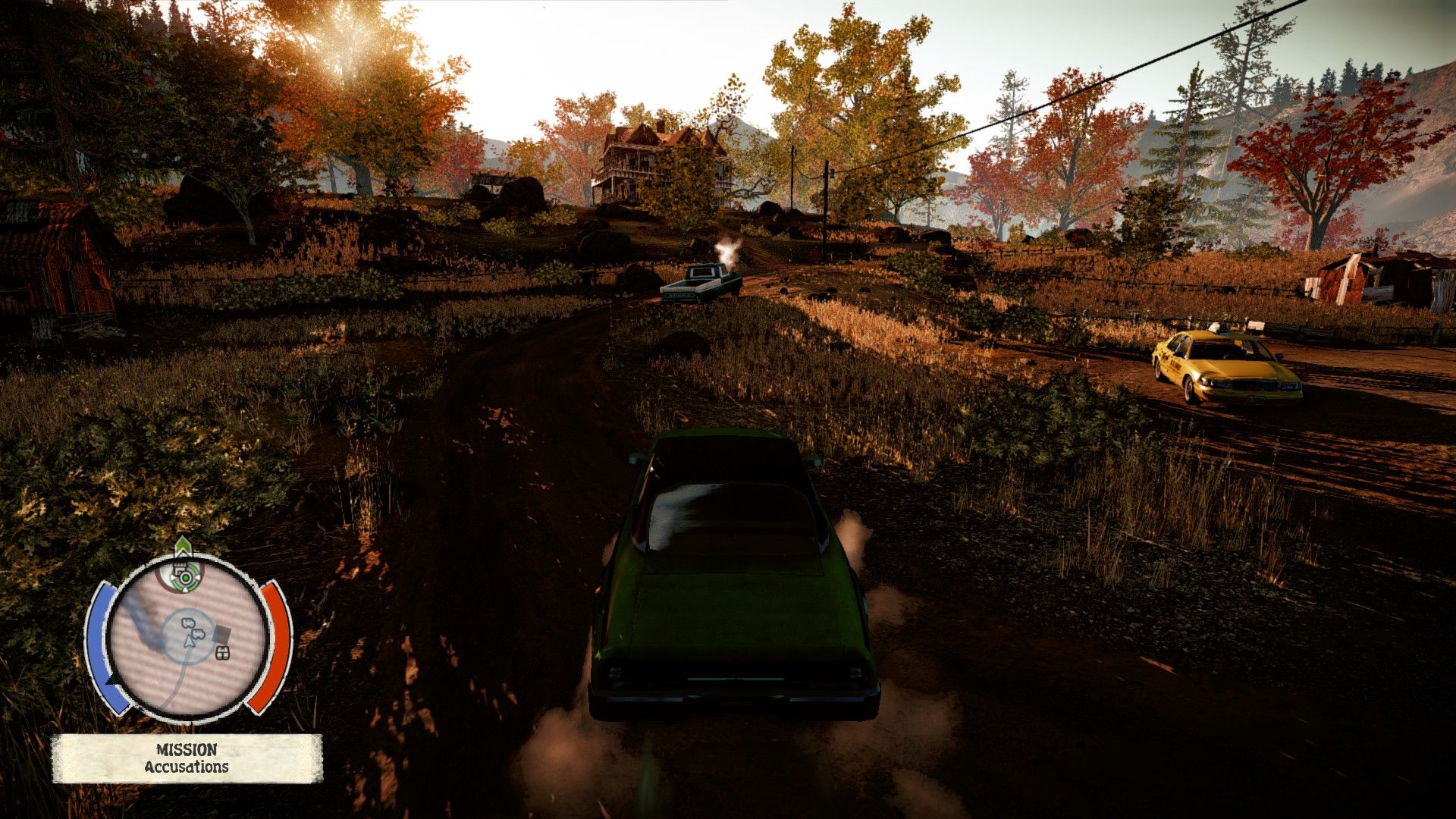 If you do get killed, which happens very infrequently, rather than reverting to an old save you will start playing as another survivor in your group. It is in your best interest to keep survivors alive for as long as possible since you gradually gain passive improvements to a character over time, such as improved stamina, melee damage and increased health. If you are out and about with one character for too long, their maximum stamina will be decreased until they go back to the base and rest. When you do this, you will take control of a different survivor, meaning you will end up playing as many different characters throughout the game.

If you decide to take on one of the many missions the game notifies you of, you will be greeted with a fairly limited array of tasks. You might go kill some zombies with one of your group members who is feeling scared and reducing the moral of your group, resulting in the same canned dialogue almost every time. Or you might go to a town and help some survivors find a missing friend. Some of these begin to form story arcs, like missions related to another group of survivors lead by a judge, or others that relate to the presence of the army. There is no real through-story, so these snippets of narrative however limited are very welcome. Other missions are passive, and involve building a specific structure for your survivor camp or clearing out a couple of houses infested with zombies. The rewards for completing quests come in the form of moral boosts for your group and reputation, which will allow you to take items from communal staches located in survivor bases. 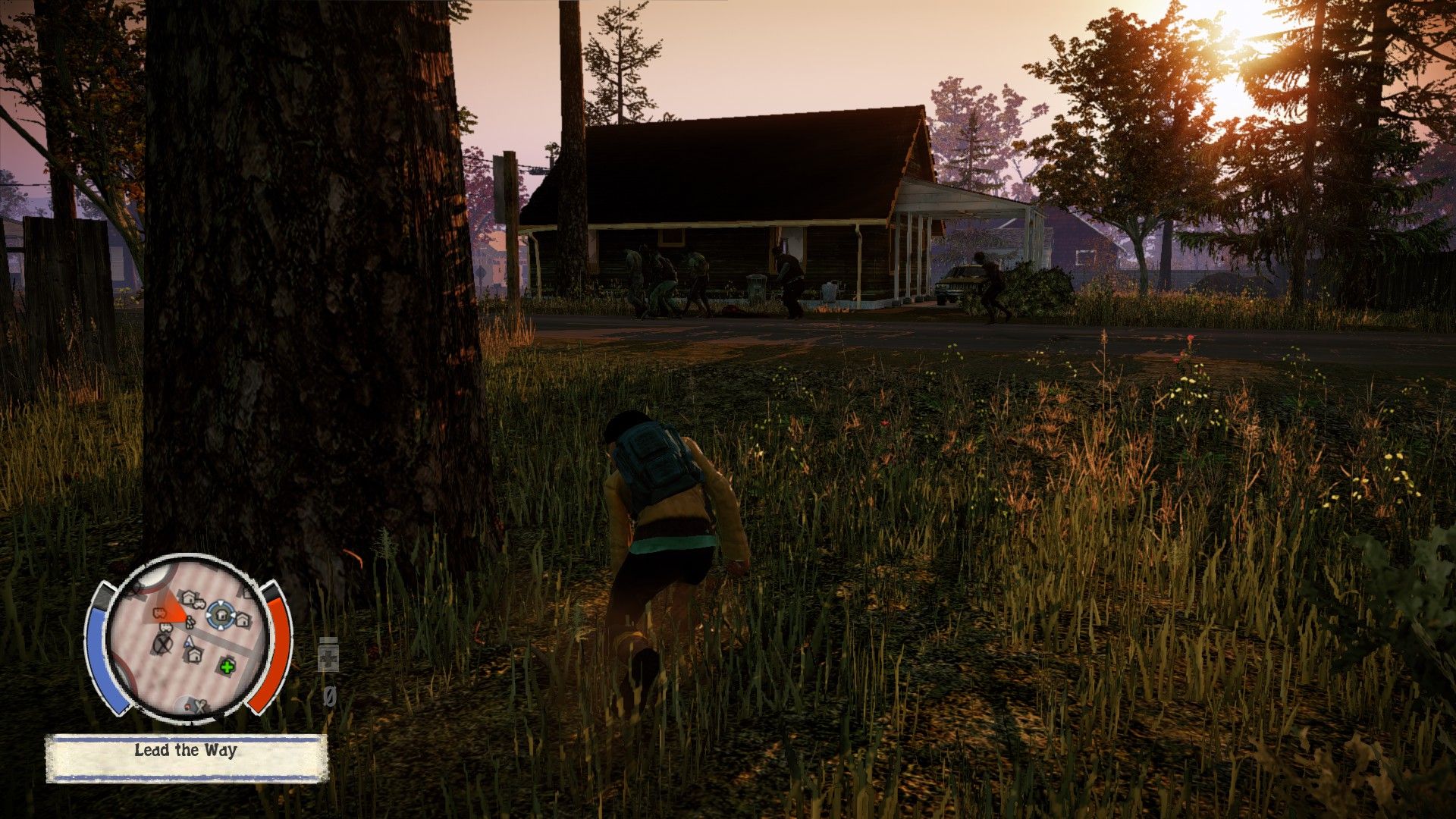 Sneaking is the best way to avoid roaming zombie hordes

While the explorable area in State of Decay isn't huge, you can enter and drive vehicles left lying around which are all conveniently unlocked with keys in the ignition. Driving a car feels responsive and light almost to a fault; if you crash into an object at speed your vehicle will go flying in some pretty crazy ways. Running over zombies is a very effective way of killing them, although cars will become damaged in the process. Zombie hordes roam the streets, and running into them at full speed will be as damaging to your vehicle as it will be to the shambling flesh-eaters.

The amount of time you spend on State of Decay is linked directly to how invested you become in the well-being of your survivor group as well as your tolerance for repetition given there is no real end to the game but the random objectives start repeating. It takes a good amount of time and scavenging to fully upgrade your survivor camp with an infirmary, vehicle-repair station and watchtowers among other fortifications, but if you don't buy into the well being of your AI dependants you will struggle to care enough to go through the trouble of collecting all the required materials. I found myself losing interest in the game after seven or eight hours, but those who are craving a fully realized solo zombie-sandbox experience will likely get many more hours out of it than that. Regardless of how you look at it, you are getting a lot for the modest asking price. 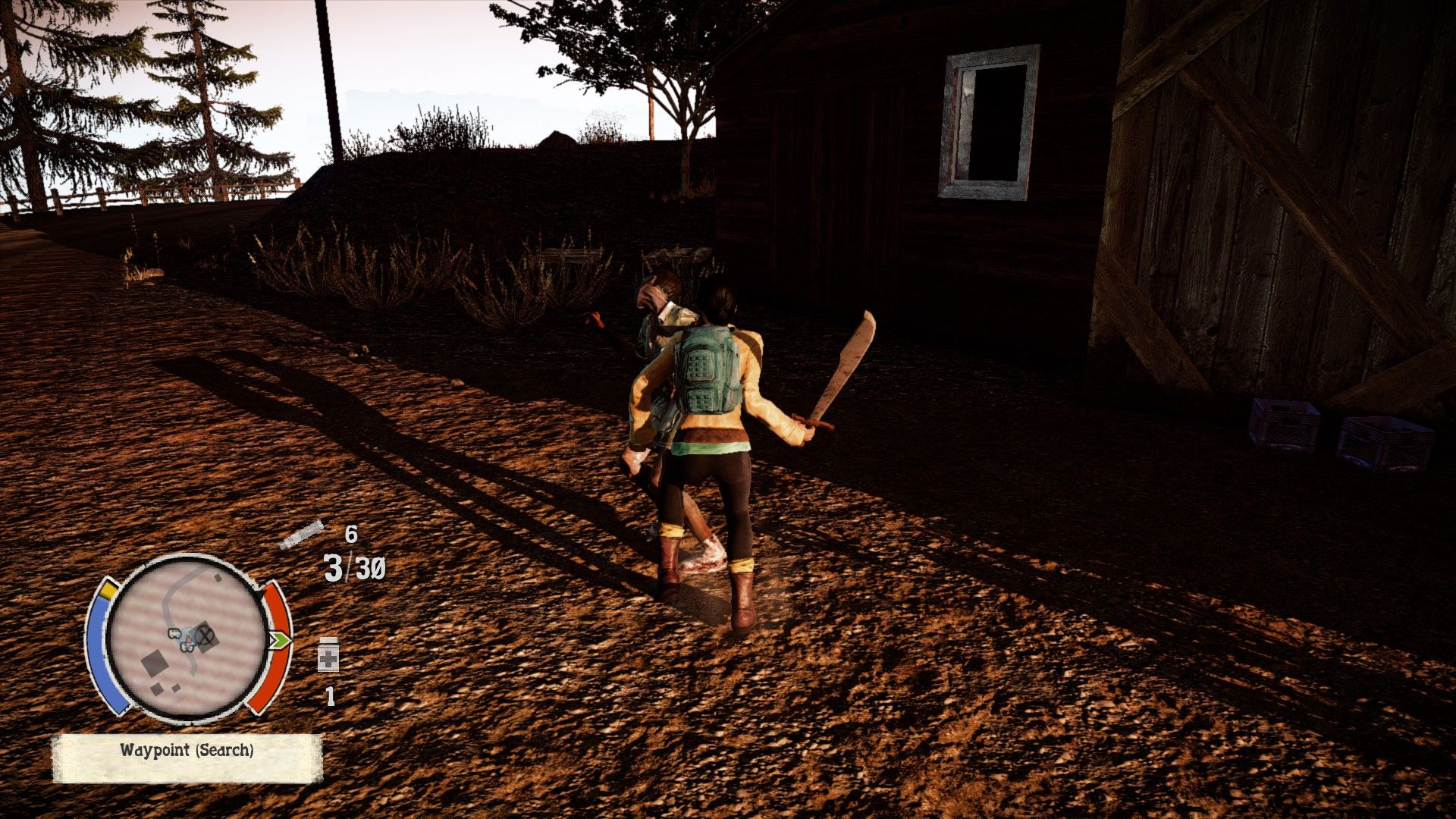 Melee combat is simple but satisfying

As a budget priced title, State of Decay looks reasonably good, with strong lighting and shadow effects masking the often sub-par texture quality. Simplistic characters models make it difficult to form any real attachment to the many protagonists beyond simply surviving for a long time with one of them, although voice acting and writing comes across as campy rather than corny. The sound effects are equally functional; zombie heads pop with a satisfying squish and firearms sound loud and powerful. The soundtrack is relegated to the background but it fits the setting and subject matter well.

Signs of the game's console heritage come in the form of generally fuzzy visuals and low resolution menus. I was able to reduce the fuzzy visuals by forcing anti-aliasing through my GPU's control panel, but it still doesn't look as sharp as I would like. Performance is generally good apart from some stuttering when driving quickly near towns. The developers' efforts to work with the community in mapping out good controls on the keyboard and mouse have paid off as the game controls very well with this setup despite some minor issues with mouse sensitivity. 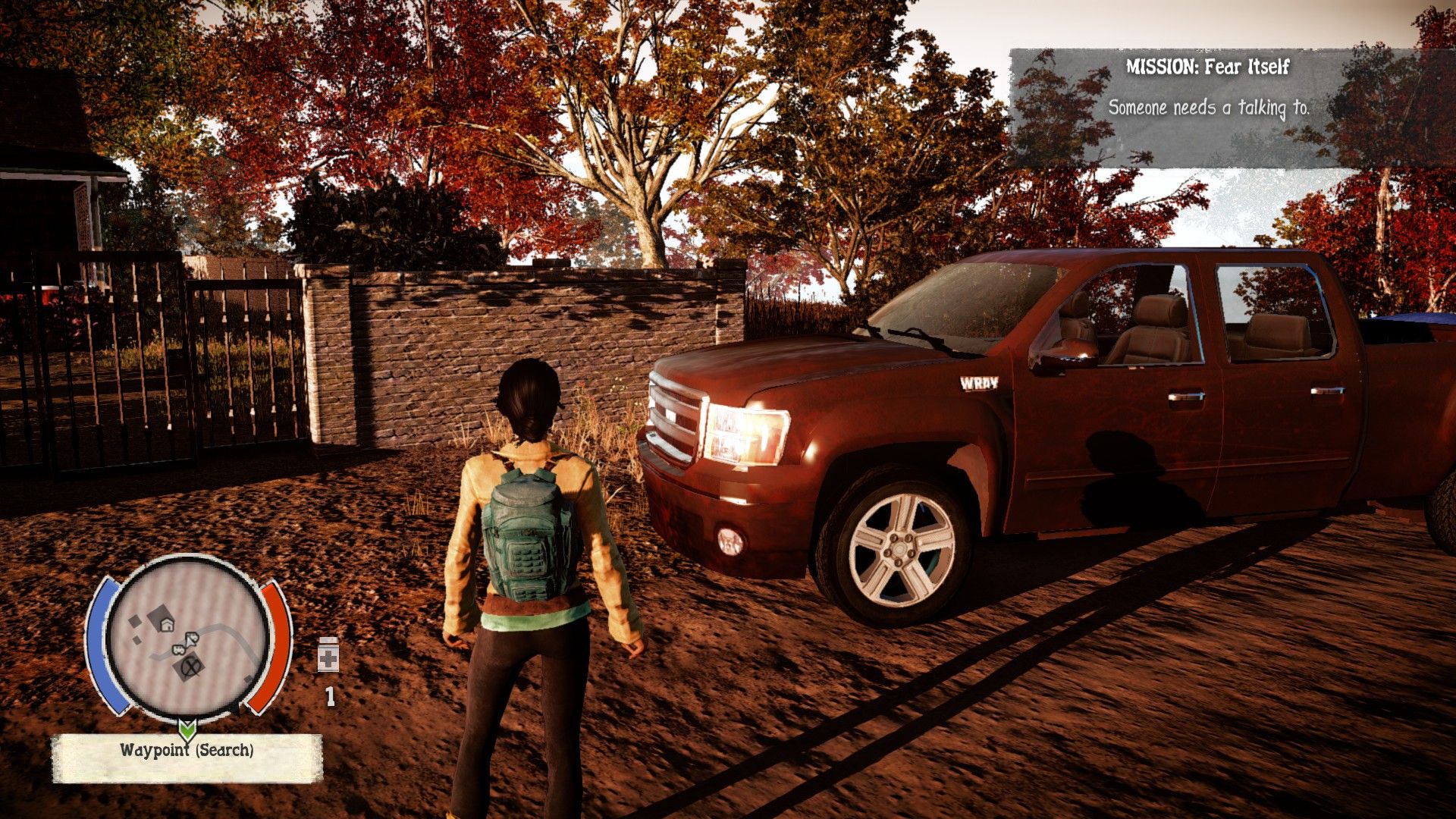 This car used to be black. And that ain't red paint.

If you have been looking for a zombie-themed survival sandbox but don't want to contend with bandits and hackers in online games, State of Decay will scratch that itch. The lack of tension in exploration is vindicated by fairly complex mechanics surrounding the well-being of a group of survivors you must watch over. State of Decay succeeds in its ambitions and despite some rough edges provides a compelling open world experience.

78
The game runs smoothly apart from some stuttering near towns, bugs in zombie pathfinding are common but not overly problematic.
Overall
75
State of Decay is a well designed zombie sandbox that focuses on managing a group of survivors over endless combat and offers good value for the asking price. 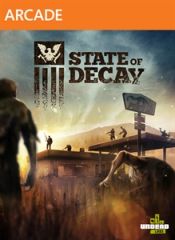