There's unique fun to be had, even if it comes in a glitchy package

“I’m doing this the quick way. If you don’t like that, find another lobby. You'll have forty-five seconds to do your thing, then be back in the van.”

Judging from his terse instructions, our ringleader deemed both heist and crew to be below his standards. He was probably speaking to me, in particular. Even without the numbers next to our names, it would’ve been easy to tell that I didn’t belong. In Payday 2 you can reasonably approximate a player’s level by the intricacy of their chosen mask, and the rest of this group was a grotesquerie of horns, fangs, and weeping sores. They could have easily passed as traveling members of Slipknot. I looked like a sad mime.

It passed in a blink. I pocketed as much jewelry as I could, trying to be mindful of the time, but I was still the last one to the van. Back in the menus, he debriefed us thusly: “Okay. I’m doing one day missions tonight; if that sounds good, then hang around and you’ll do well for yourself.” A brief pause. “We’re just going to be doing pro missions, though. That means you won’t be joining us.” Did he mean me? I was booted before I could even construct the question. Payday 2’s equivalent of a bullet to the back of the head. One less share, right? 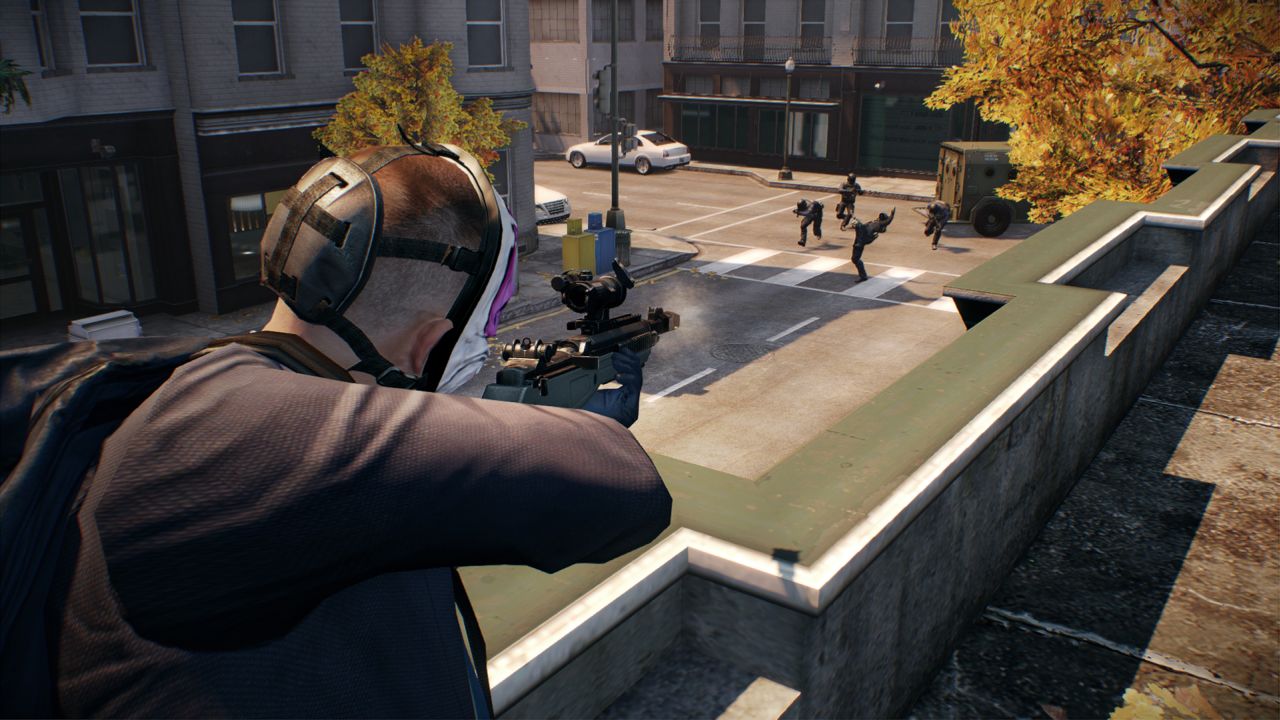 That’d be The Dark Knight’s influence, there. Overkill Software’s new shooter invokes such precedent liberally. Heat, Point Break, Resevoir Dogs…each make their appearances in details large and small, in actions both scripted and emergent. Police cars, parked askew on a median. An impromptu bucket brigade forming to toss duffel bags of coke into a van. The particular contrast of a two-piece suit, a mask, and an M-16. On a difficult mission, with a coordinated crew, Payday 2 uses these elements to construct a vivid tableau of the modern heist. It’s immersive and engrossing. Then a group of police officers crouch-walk through a wall in front of you, facing the wrong direction.

So yeah, it’s impossible to mistake Payday 2’s budget-conscious origins. Every time you fix your gaze on a rough-looking texture, or get trapped in the environment, or watch as a few dozen policemen take turns charging to their deaths like lemmings, the game’s seams show. It does itself few favors; missions like Mallcrasher—which asks you to do $50,000 of damage to property that largely doesn’t display damage—shine a big spotlight on Payday 2’s own deficiencies.

The almighty dollar makes its presence felt in other unsavory ways, too. The lion’s share of the money you’ll pull in, millions of dollars in gold bars, jewels, and bills, gets shuffled off to your offshore bank account, an insurance policy that never actually gets cashed in. That would be a superficial issue in-and-of-itself, but when paired with Payday 2’s stingy rewards system, it chafes. Cash is used towards everything: weapons, attachments, masks, and skills, and early on the costs are prohibitive for all. When you inevitably get bottlenecked, being told that you have a fortune squirreled away in the Cayman Islands feels like a slight. 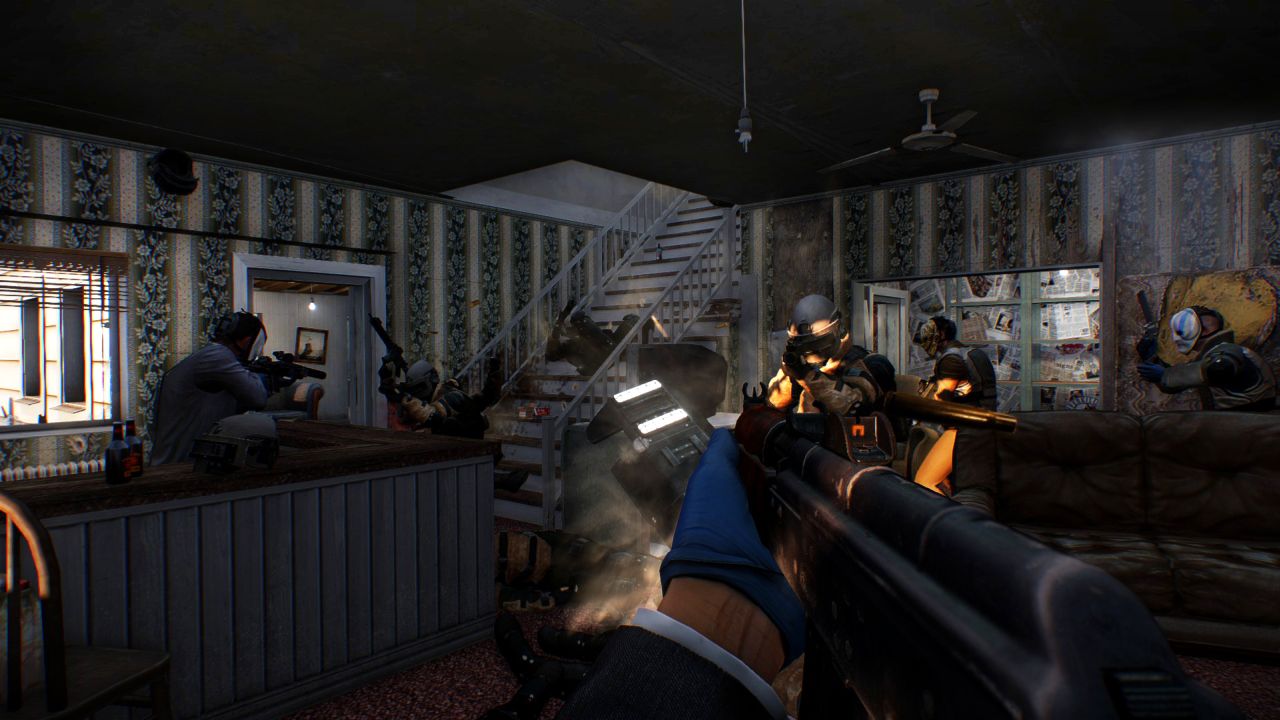 The real tragedy is that Payday 2 locks away the best portions of its played experience behind this system. Features that enable the sort of stealthy, strategic play that set the game apart from more conventional shooter fare are sequestered away in skill trees, or behind a randomized loot drop that follows each mission. Want a silencer for your weapon of choice? Best start praying to the god of random number generators. Fancy the idea of picking locks, using C-4, or intimidating officers? You’ll have to grind away the hours to pay for the requisite skills. In the meantime, you’ll have to deal with a less interesting version of the criminal lifestyle, where all your problems need to be solved with a gun.

That’s unfortunate, because Payday 2 isn’t a great shooter. Weapons suffer from tremendous balance issues, even after a recent bit of patching. They’re also excruciatingly difficult to customize, because two separate dice rolls stand between you and the attachment you covet. At level 40, I’ve yet to land a scope for any weapon in my arsenal. In that time, I’ve doubled and tripled up on attachments that I already have, for guns I’ll never use. Not that it’s of much consequence; scope or no, the accommodating policemen of Payday 2 are more than happy walk face-first into the barrel of your gun. Cops are so bereft of strategy (and so indifferent to their own wounds) that when things come to blows, the game feels much more like a zombie horde mode than a heist simulator. When you’re waiting for one of Payday’s ubiquitous drills to finish boring through a safe, the resemblance is uncanny.

At the very least, the tedium of Payday 2’s shooting provides an incentive to seek out nonviolent means. Stealth systems are generally well realized: managing noise and exposure is key, guards will sound the alarm if they spot a damaged security camera, and civilians are quick to dial 911 if you’re not snappy with the cable ties. You’ll find yourself breaking into the same bank or jewelry store repeatedly, but a randomized distribution of security features mitigates deja vu. Drilling into a vault only to be met with an electric shock, or finally opening a door only to find a second behind it, never failed to elicit a wry smile from me. They’re setbacks, yes, but being in a pressure cooker is part of the draw, isn’t it? 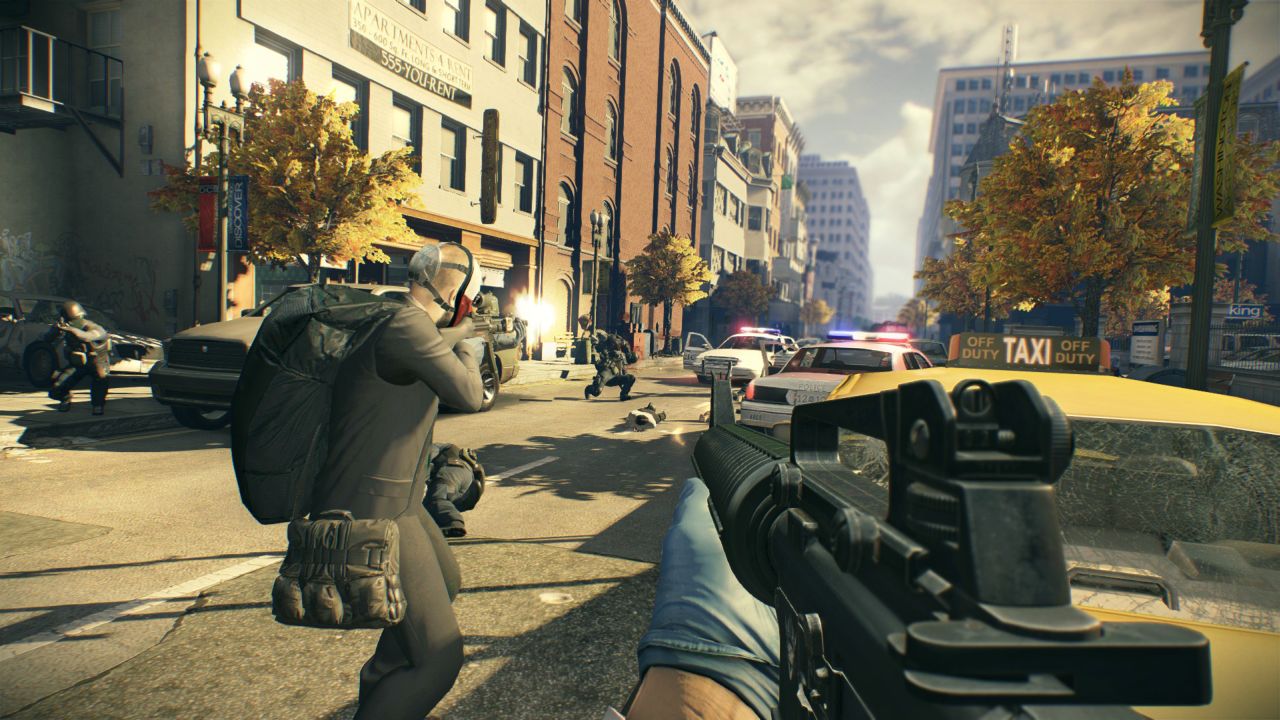 It’s an unforgiving system where most stealth attempts won’t pan out, but thankfully there’s reason to give it the ol’ college try. Every minute that you progress undetected is a precious minute that the law won’t be escalating its offensive. There’s a big step up from mall security and traffic cops to blast suit-clad, shotgun-toting “Bulldozers”. Fortunately, even if you draw a lot of unwanted attention, you can attempt to strongarm the locals into compliance. My favorite part of any match is the moment when an accomplice accidentally gets spotted, and it becomes a race to break in and corral the civilians before someone escapes or hits the alarm.

It’s a shame that, outside of that brief moment, your interaction with your hostages ends up being fairly limited. You tie them up, then largely forget about them until they accidentally run into your line of fire. The Mastermind class, which specializes in crowd control, gets a few relevant perks (including a clever integration of “Stockholm Syndrome”), but they’re mostly passive. The police, for their part, seem to place no value in the well-being of the hostages. They'll perforate your building with small arms fire, and only attempt rescue with simplistic, infrequent raids.

At some point during your time with Payday 2, you’ll come to find that you’ve arrived. You’ve happened upon the right weapon attachments, unlocked some useful abilities, and finally decided to shed that conspicuous mass of full body armor. It doesn’t come gradually. One time you fire up the game, look at your bank account, and startle to find that the dollars are just piling up unspent. It’s only then that you get an experience that differs meaningfully from other “horde mode” shooters, but it’s worth the investment for fans of heist media. The stakes get higher, the action more frantic, the crews more professional. The tools of your trade are in your duffel bag where they belong, not waiting to be unlocked.

Our ratings for Payday 2 on PC out of 100 (Ratings FAQ)
Presentation
60
With bare-bones textures, low-poly objects, and a garish color scheme, Payday 2 isn’t much to look at, though some affordances have to be made for a low cost of entry. It’s got some visual character, and the audio packs a dramatic punch, even if your "tech guy" narrator seems entirely out of place.
Gameplay
65
It’s frustrating that Overkill locks the bulk of Payday 2’s strategic content away behind random loot drops and skill requirements, because when you’re finally afforded some useful equipment the game becomes much more enjoyable. Teamwork isn’t just enjoyable, it’s essential. Even the glitches and foibles can do a bit to make Payday 2’s gameplay chaotic fun.
Single Player
40
The same incompetent artificial intelligence that leads enemy policemen to charge suicidally into your fire will lead your computer-controlled teammates to run to their deaths constantly. There’s really no storyline to speak of, even as a framing mechanism. Don’t bother with single player here.
Multiplayer
70
There’s a solid stealth/shooter hybrid somewhere in Payday 2, even if it’s terribly reluctant to reveal itself. You’ll need to put in your time, find a good crew, and challenge yourself to get a worthwhile experience out of the game, but it’ll pay some dividends if you're able.
Performance
46
While freezes and other catastrophic errors remained mercifully absent, I experienced the full gamut of other glitches. I witnessed my character falling through ceilings, got trapped in the environment, got killed when I should have been placed in the ‘wounded’ state, and lost missions due to items becoming unusable.
Overall
64
Payday 2 makes a pretty poor first impression, and a bad bit of luck with randomized loot drops can really prolong that effect. Once the game grants you the right tools, there’s unique fun to be had with its messy version of team-based stealth, even if it comes in an ugly, glitchy package. 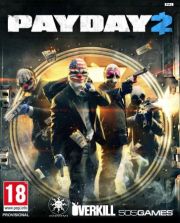 All videos for Payday 2 (2)
Advertisement ▼