Haven't you always dreamed of being a paper-shuffler in a socialist dictatorship?

It’s a scene that we’re all familiar with. Our dashing hero has finally made it out of the tunnel, or the prison, or the elaborate death-trap constructed by the villain at a secret mountain hideout. The immediate danger is gone, but there’s that one catch that still poses a problem: how are you getting over the border? I don’t care whether you’re Jason Bourne or James Bond, at some point in your journey, an official behind a desk is going to peer at you suspiciously and say those impersonal words: “Papers, please.” If played right, this simple situation can have a big payoff. It’s an instant game of poker to hand over forged or incomplete documents, and then try to appear casual as you pray to all that’s holy that the man over the counter isn’t really doing his job all that well. There was enough tension in this single concept to form the entire basis to last year’s “Argo”. Now, we finally get to see the other side of the story: just what is going through that clerk’s head anyway? 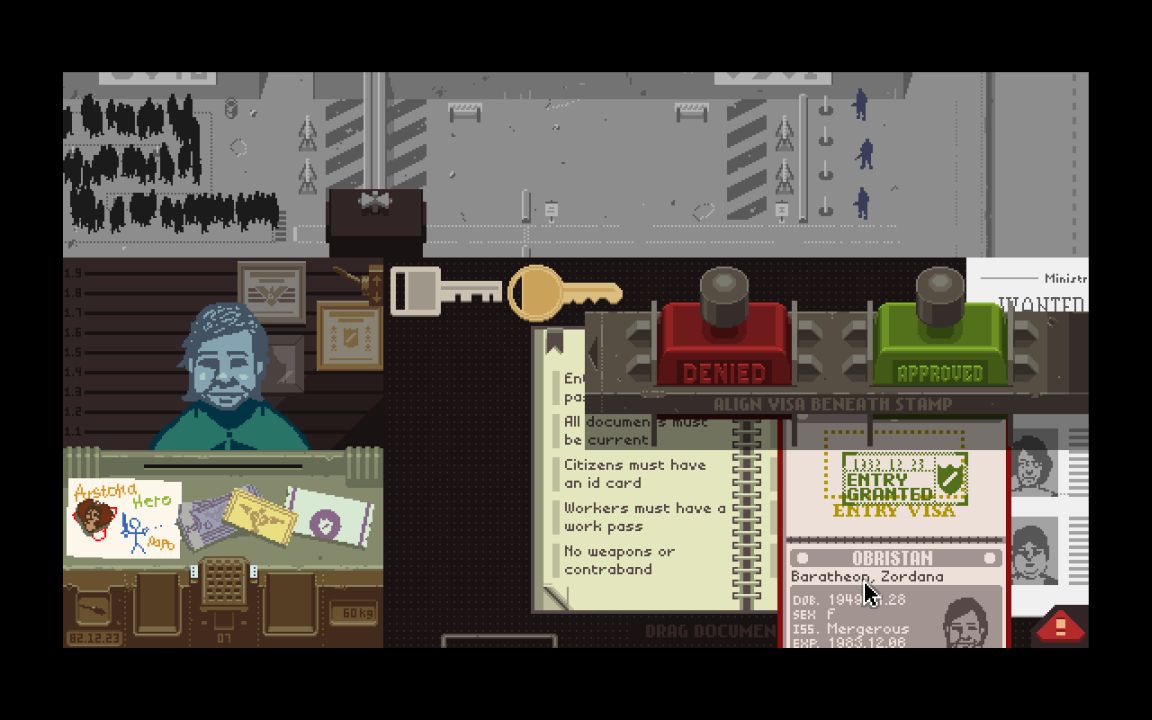 Behold the power of the stamp of approval

Papers Please is described by its developer Lucas Pope as “a dystopian document thriller”. You play as a humble worker in the almost-but-not-quite-Soviet nation of Arstotzka. Your job is to sit in your booth and decide who gets to come into the country, and who doesn’t. If that sounds like an incredibly boring premise for a game, then it’s to the developer’s credit that it turns out to be so engaging. The game sports a simplified pixelated aesthetic, with the only real visual variety coming from the different characters who step into your booth.

The basic gameplay in Papers Please is simple: each level of the game is a work day with a strict time limit, and you must cycle through as many people as possible before your shift is over. For every person you process, you’ll earn a little money, and since food and rent for your close-to-starving family usually takes up your entire paycheck, you can’t afford to be lazy. Be quick and efficient, and you’ll go through maybe ten or twelve applicants. Get stuck on tricky case, and you’ll have to sacrifice your apartment’s heating for a night. 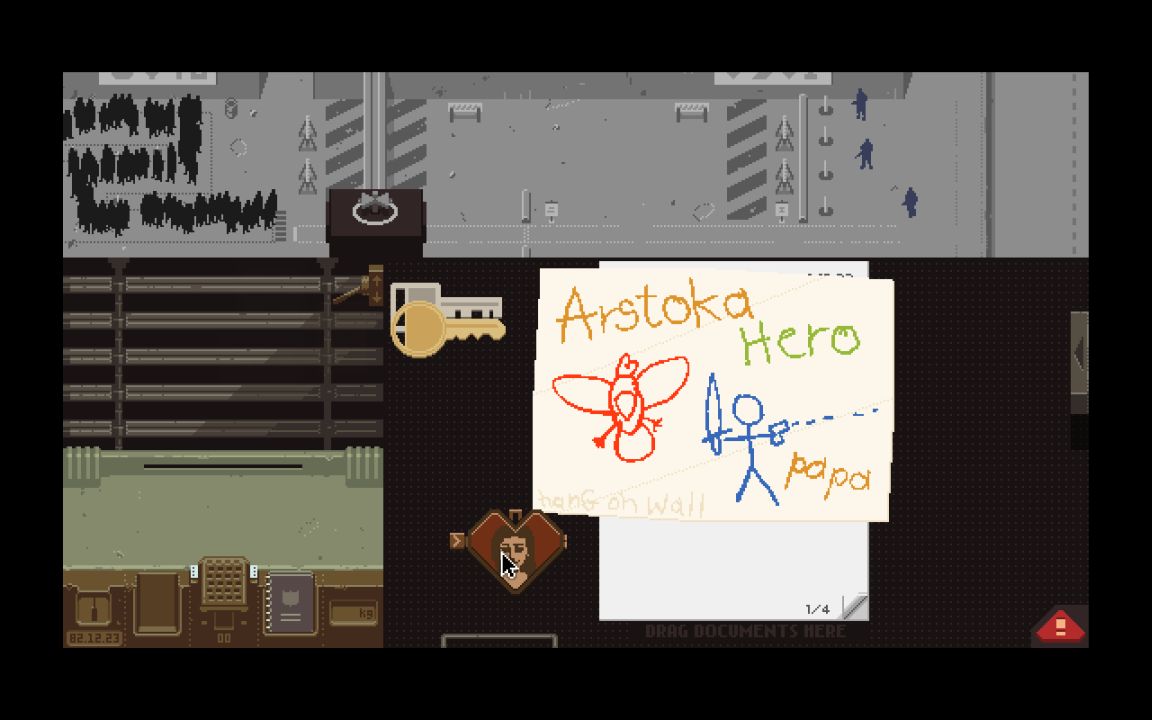 Here’s where the game focuses in on its core gameplay mechanic: document verification. Your job is to look at each person’s passport (and other papers), and see if there’s anything fishy that warrants a barrier to entry. Do they look different than their photograph? Is their passport expired? Do their verbal responses to basic questions match the information in their papers? The game nicely introduces these restrictions one by one before slowly ramping up the level of difficulty by adding more and more rules to follow. Do their fingerprints match what’s on record? Are they from an enemy country? Are they too young or too old for their claims to make sense?

You’re constantly under pressure to check each of these aspects as fast as you can, and every few days some rules will fall out of use, and new ones will take their place. Sometimes workers will require special passes, for example, or they’ll need proof of immunization. Don’t think you can just scuff off in order to get through as many as possible either: rejecting or admitting the wrong person will be tracked back to your employment record, and will end up with a harsh fine from your already-meager pay check. Eventually, the game will even throw in some very light combat elements and puzzle-solving to spice things up. That said, for most players it still won’t be enough to overcome the monotony of having the same screen load for every single level. 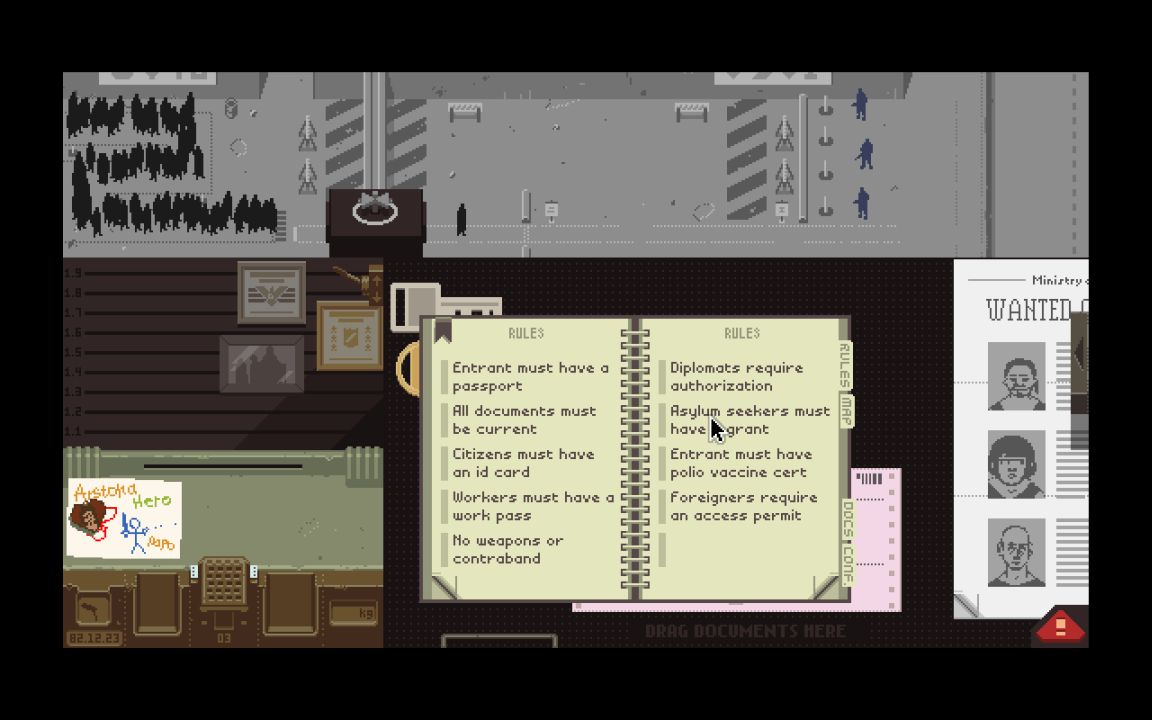 As it turns out, the game actually presents a decent story as the gameplay unfolds. Pay attention to who steps into your booth, and you’ll not only spot some cameos from appropriately dystopian stories, you’ll find yourself wrapped up in all sorts of intrigues that put you in difficult positions. Should you accept a bribe in exchange for letting an illegal immigrant through? Should you follow the commander’s orders when he breaks protocol? Should you aid the mysterious rebel group who keeps slipping you notes? These situations all provide a surprising amount of substance in the form of sub-plots to the overall survival story.

And make no mistake, this IS a survival story. The first time I slipped up, my wife and son got sick, and when I couldn’t earn the money for their medicine, they died from lack of treatment. Ouch, that was harsh. This isn’t any sissy dysentery from Oregon Trail either: when your family members start dying in-game, it’s because you didn’t work as efficiently as you should. The level of tension gives excellent meaning to the aforementioned choices like bribe-taking: that extra hundred dollars really could mean the difference between surviving one more level, or being sent to the gulags as punishment for being in debt. 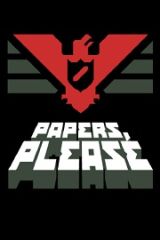