Back in April, Drinkbox Studios released Guacamelee for PlayStation 3 and Vita. It received great reviews and left anyone without one of those systems green as guacamole with envy. That has partially been remedied by Guacamelee: Gold Edition, available now for PC. The game is a side scrolling open world Metroidvania style action game. You’ll be platforming, fighting enemies, and unlocking new abilities allowing you to traverse previously impassable routes.

You play as Juan, a Mexican agave farmer who is in love with the daughter of El Presidente. A series of unfortunate events leads to his death, however he is subsequently revived and turned into a partially supernatural luchadore thanks to a special mask. Now his quest is to save his love from the evil Carlos Calaca, a skeleton hoping to unite the two worlds and hold dominion over both. Juan’s most powerful strength is the ability to switch between the world of the living and the world of the dead at will. This doesn’t only show off some cool aesthetic differences, but also has gameplay implications. Some enemies are specific to one realm, and changing between will often change parts of the environment. This leads to puzzles requiring you to switch between worlds quickly on the fly to progress. 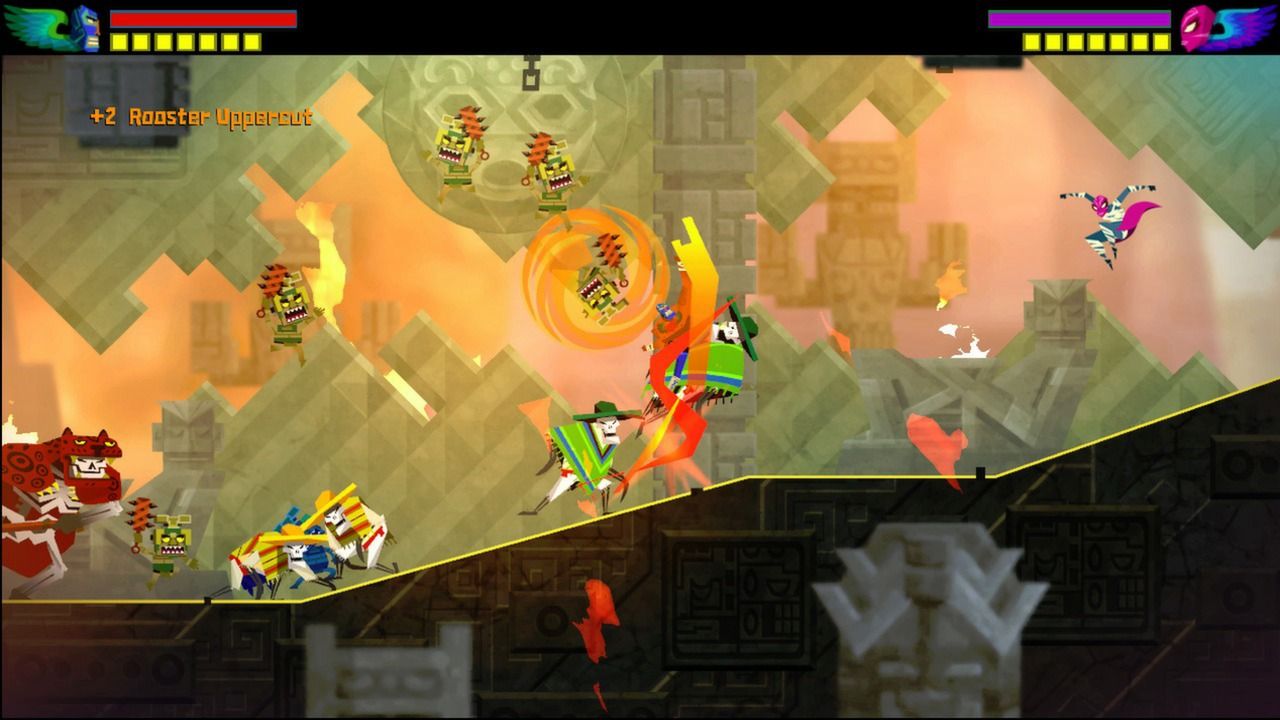 New abilities become unlocked as you continue through the story. Every time you load the game it is recommended that you plug in a controller, and it is easy to see why. I haven’t had to be this dextrous to be successful at a game in quite a while. In fights and platforming sequences you will be using combinations of all the face buttons and modifying them with directions. You have a double jump, a wall jump, a wall run, the ability to powerfully push away from walls, a dash, a headbutt, an uppercut with launches you skyward, a slam and of course, the ability to turn into a chicken. Towards the end of the story you’ll have to be using combinations of these abilities which become ever increasing in length to complete tricky platforming sections.

The abilities are essential to the combat too. Some enemies have colored shields which can only be broken by the corresponding attack, and you will often be faced by rooms of enemies, some of which are in one realm, some in the other, but all of them can hit you regardless. It’s hard without ever being unfair, and you are left extremely satisfied when you are able to pull off combinations of moves to overcome an encounter. Failing is commonplace, however if you fall off a platform you are quickly returned to where you fell off. If you die you take a short trip back to the latest save point, which are never more than a few minutes apart. Guacamelee does an excellent job of keeping you in the action and never takes away too much progress. There was only one occasion where it wasn’t exactly clear what I was supposed to do, which really shows off the clever puzzle design of the rest of the game. 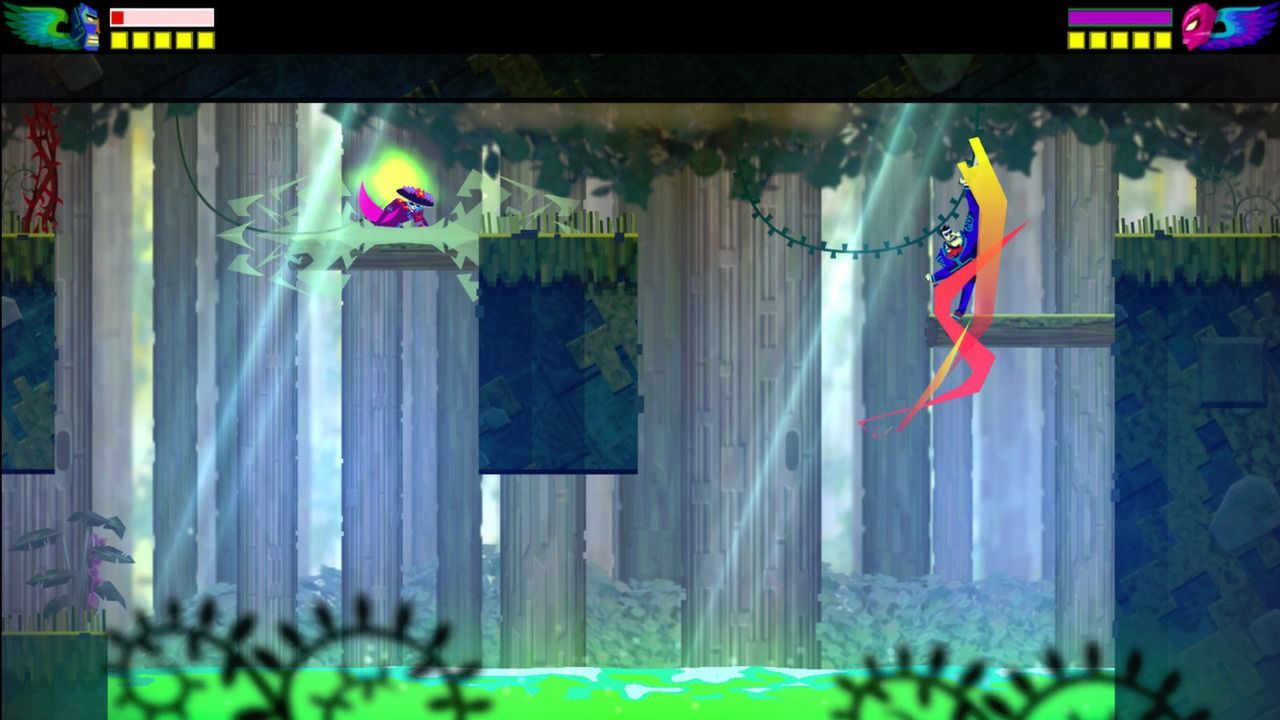 A great soundtrack accompanied by a vibrant aesthetic keeps you invested in the world. The Mexican themes are strong throughout, to the point of actually having a Mariachi band in the main town. Referential comedy is the main source of humor here, particularly relying on Internet memes for laughs. Posters for Gato Gruñon (Grumpy Cat), Los Casa Crashers and many others can be found decorating the environments. It borders on becoming too much at times, but for the most part I appreciated the references, particularly the Journey homage in the snowy level. It keeps the tone light, which is a good thing since the storyline and powers you obtain are so ridiculous. Guacamelee looks great, with plenty happening on screen at one time without becoming cluttered. It also runs smoothly, despite all the action.

It is an open world game, but you are never lost with nowhere to go. There are short side quests in the main town, some of which are picked up early on but can only be completed in later stages of the game. Mostly though, you will be following the main quest, which guides you through each of the varied environments well. Early areas will contain multiple blocked passages that will have to come back later to smash through with a new ability. These are helpfully color coded on your map so you know exactly where to return. These routes will usually contain a chest of some sort. The treasure ranges from simple coins, to fragments of masks which grant you more health or stamina bars. Coins can be used at save points to unlock new abilities, attribute increases, or costumes for Juan. Stamina soon becomes your most important resource, particularly later in the game, as most of your abilities will use it. It regenerates slowly, but if you run out of stamina at an inopportune moment, it will often mean restarting a puzzle. 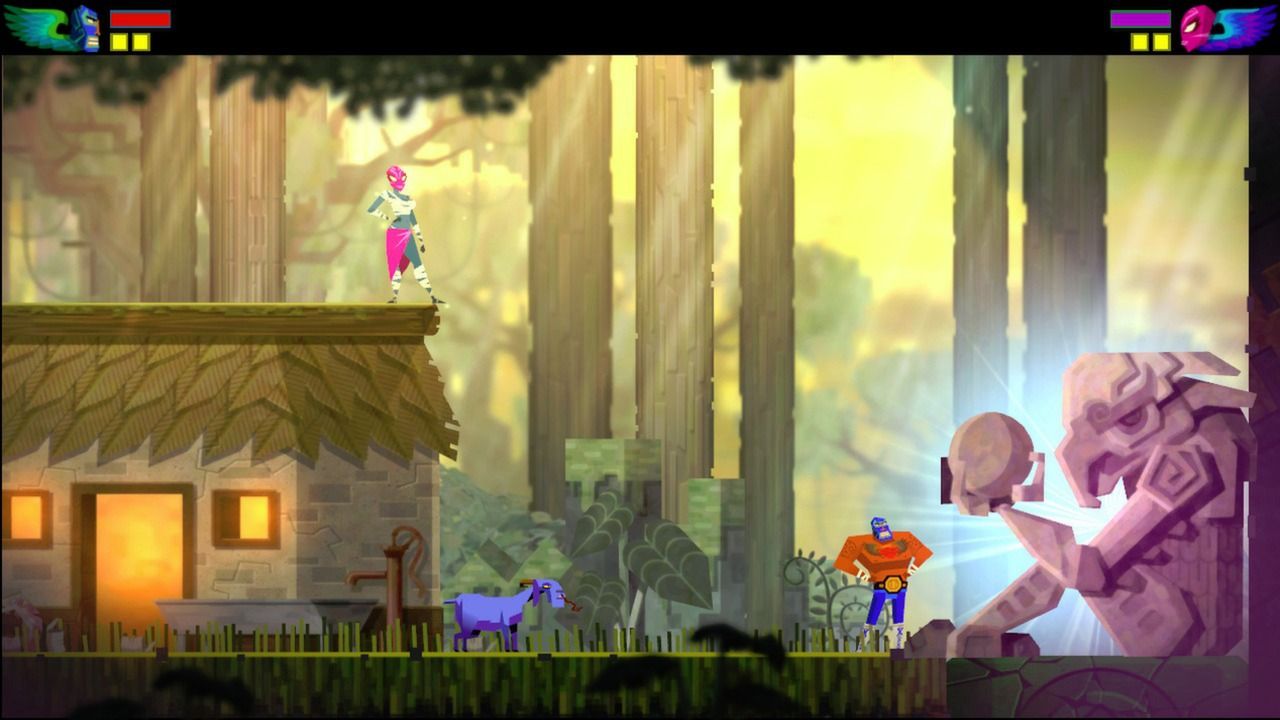 One complaint that remains true from the original PlayStation version is the short length. I managed to finish the game in under six hours, but this is forgivable considering it is far from a full price retail game. The issue could’ve been solved by making later stages a slow trek through multiple rooms, but I’m glad this wasn’t the case. I did find the final boss to be disproportionately hard compared to the preceding stages, but this is only a minor flaw. The gameplay is compelling enough that it is easy to lose a couple of hours playing it in one go, so it is definitely possible to complete it over a weekend. There is more content to be found by exploring every inch of the world to unlock everything, but once you finish the storyline there isn’t much point unless you’re a completionist.

If you are a completionist, this is a great game for you. Getting 100% will turn Guacamelee into a pretty good length for the price. However, even if you only play the game for the main story, you will still have an enjoyable time. You can even bring in a friend for some co-op action. You may have to do some finger warm ups before playing though, as this isn’t a game about figuring out what to do as much as figuring out how you’re going to do it. It’s quite short, but the old saying about good things coming in small packages rings true here.

Our ratings for Guacamelee on PC out of 100 (Ratings FAQ)
Presentation
90
Great colorful environments along with a Mexican themed soundtrack make it a beautiful place to spend time.
Gameplay
87
A huge variety of abilities that has your fingers spread all over the gamepad, but it never becomes over-complicated.
Single Player
83
The storyline isn't particularly interesting, but it serves a purpose. The short length may be an issue for some.
Multiplayer
83
Same screen co-op is the only multiplayer on offer here, and doesn't vary from the single player experience.
Performance
(Show PC Specs)
CPU: Intel i5-3470 @ 3.2GHz
GPU: AMD Radeon HD 7800
RAM: 8GB RAM
OS: Windows 8 Professional

90
Ran great on my machine with barely any issues to speak of.
Overall
85
Guacamelee is a fun action game that requires real skill at times, and despite its short length is a title well worth checking out. 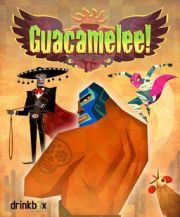