While 2011's Red Orchestra 2: Heroes of Stalingrad was utterly unforgiving and a bit rough around the edges, its unrelenting attention to detail and adherence to realism made it one of the most compelling multiplayer shooters of its time. With Rising Storm, a long time coming stand-alone expansion to Heroes of Stalingrad, the focus is moved to the Pacific theater and the conflict between the Americans and Japanese. While it would be easy to pass off the shift in setting as a merely cosmetic overhaul, changes to map design and team dynamics make for a very different but equally intense and engrossing experience that manages to surpass the base game in overall quality. 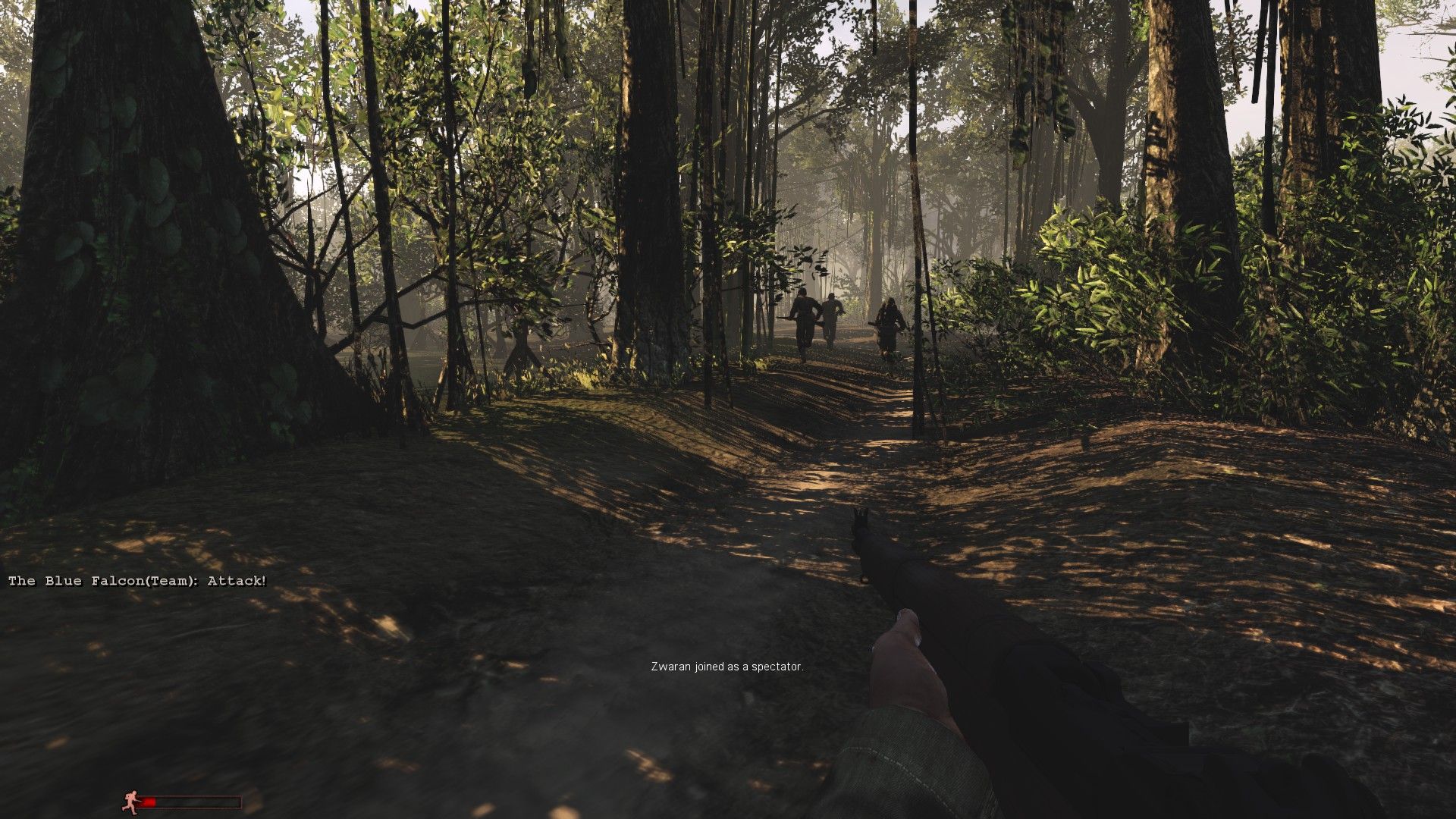 The biggest challenge facing Tripwire when designing a shooter that pitted the Americans and Japanese against each other was finding an equilibrium between balance and realism. In the Second World War, the Americans had an indisputable technological advantage over the Japanese, with the yanks boasting a fearsome array of fully and semi-automatic firearms. The Japanese fought almost exclusively with outdated bolt-action rifles and instead relied on guerrilla tactics and suicide charges to stave off or overrun American forces. It seems unlikely that this dynamic of the conflict would be able to make it into a video game intact, but Tripwire have managed it and the result is a game that has two fairly different factions that are still reasonably well balanced.

Both the Americans and Japanese allow you to choose between a variety of roles and use the same command structure of a single commander and several squad leaders, but this is where most similarities end. If you choose to play as the Americans, you gain access to a variety of deadly firearms, including the flamethrower, which has very short range but can be used to instantly clear enemy strongholds if its wielder manages to manoeuvre close enough. Riflemen have access the semi-automatic M1 Garand rifle, and automatic riflemen can use the BAR to deadly effect. An organized American team will advance slowly and carefully, putting down smoke grenades for cover and calling in Artillery strikes when appropriate so that the flamethrowers can get close to objectives and clear them of enemies. 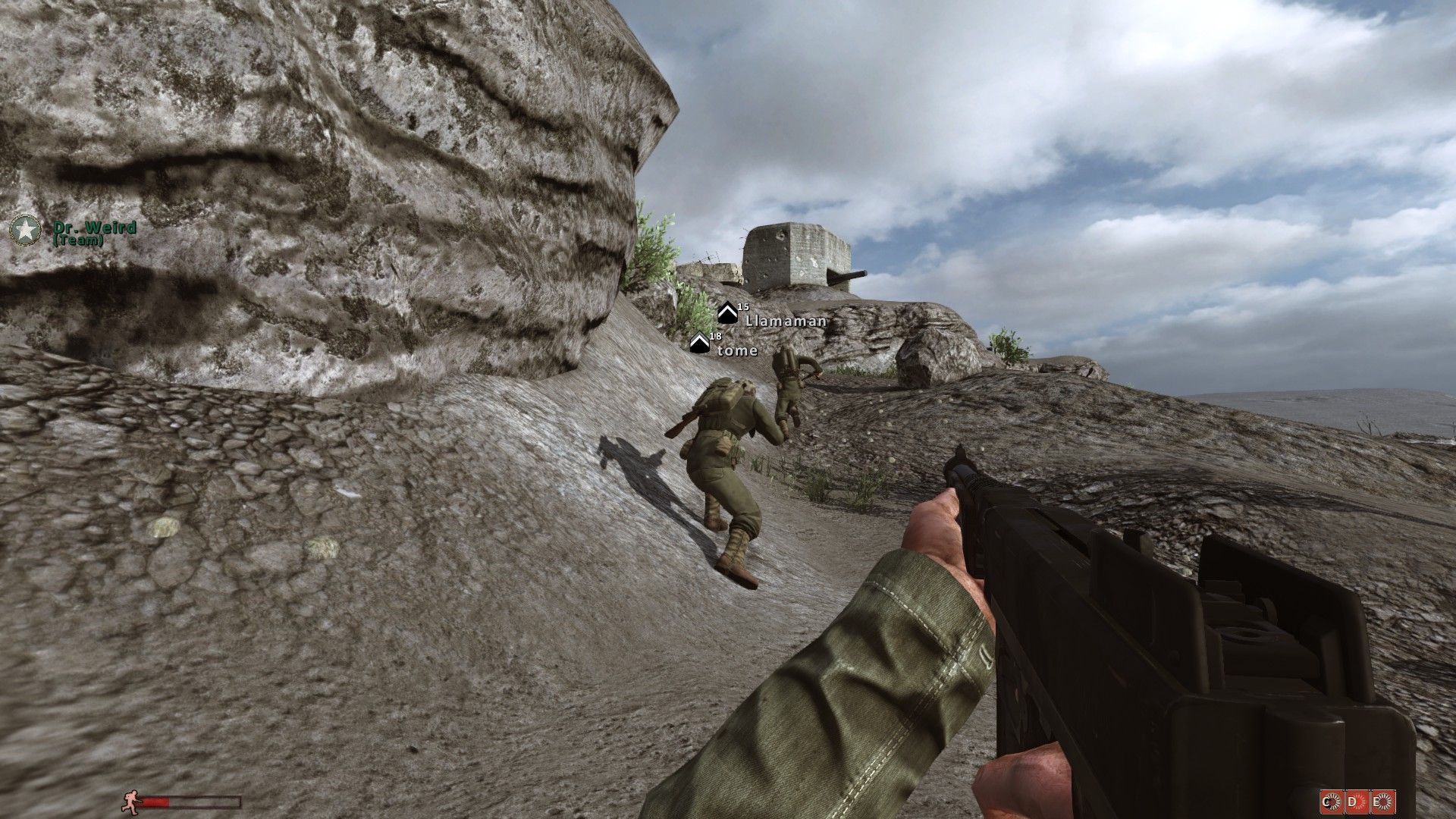 It is important to cover Flamethrowers as they advance…

The Japanese will at first seem to be at a significant disadvantage as they only have access to a couple of bolt action rifles and a submachine gun, but they have a few tricks up their sleeve that can turn the odds. The Banzai charge is probably the most dominant and important mechanic; when sprinting, you can hold down the melee button and charge at the enemy. This will suppress them and negatively impact their aim. The more players involved in a Banzai charge, the larger and stronger the effect of the suppression. Charging into battle with ten team mates screaming in Japanese is thrilling and hilarious, and infinitely gratifying if you manage to survive the hail of incoming fire and clear out a capture point wielding nothing but bayonets and fear. Fighting against Banzai charges is terrifying; often you will fire off the remnants of your clip into an oncoming charge watching in horror as the bullets miss, leaving you helpless and exposed. The Japanese also have the option to suicide with grenades; this involves pulling the pin and banzai-charging the enemy. If you kill someone while suiciding, it does not count as a death and your team does not lose a ticket.

These mechanics are better suited to offensive situations, but the Japanese have a few unique weapons and techniques to establish effective defensive positions as well. The knee mortar is a sort of grenade launcher that can be arced into enemy strongholds or used to weaken American offensive pushes. The Japanese can turn grenades into booby-traps which will detonate once an American trips it, although laying these mines is currently a bit more difficult than it should be. These various mechanics allow the Japanese to effectively counter the heavy firepower possessed by the Americans in many situations. 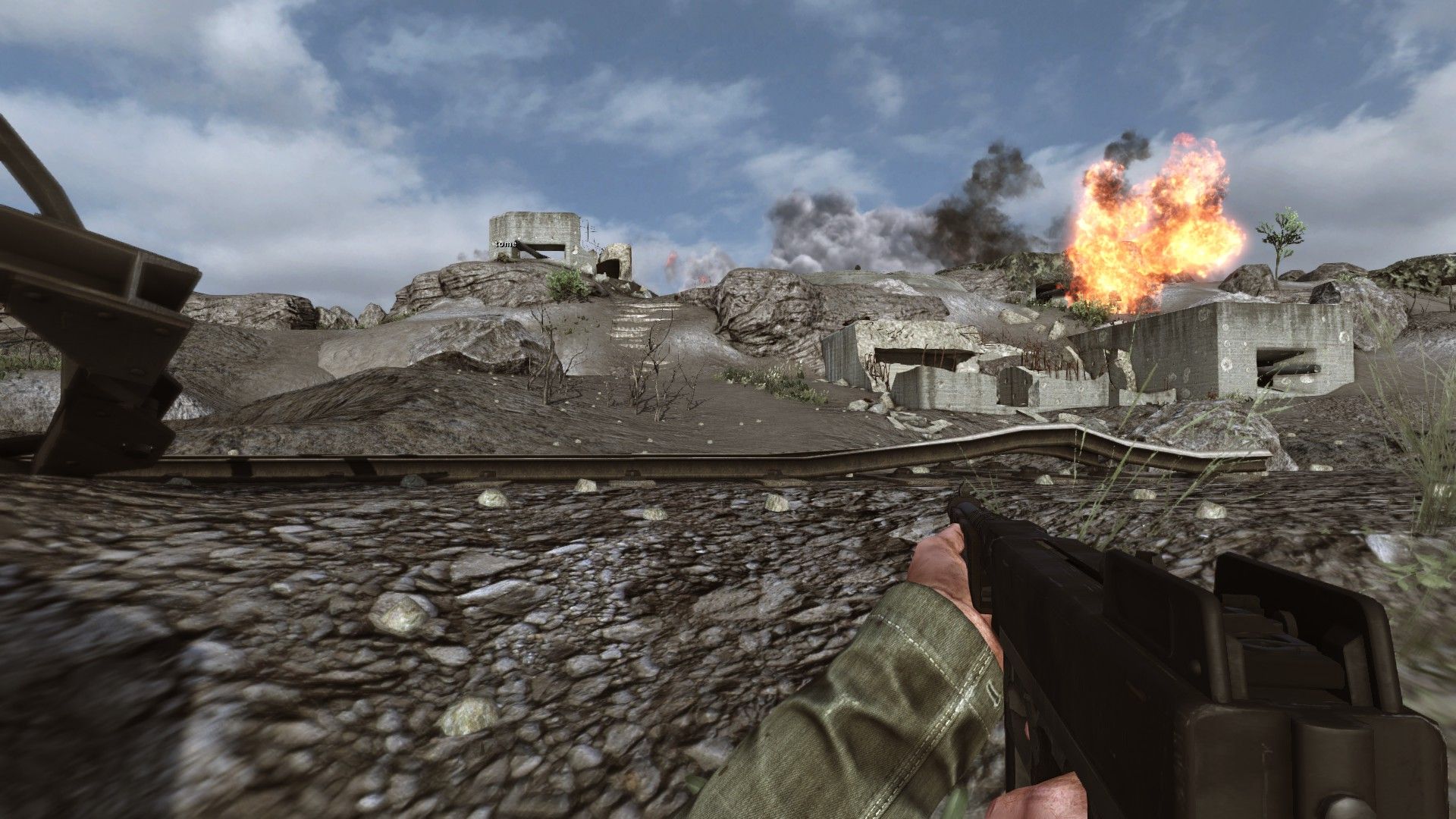 ...so they can clear enemy strongholds

Of course, none of these tricks are useful unless a team is coordinated. The commander and squad leader roles return, and effective communication between the commander, squad leaders and front-line soldiers is essential, especially for the Japanese who must rely on group charges and thorough placement of booby-traps to win. Commanders on both sides require marks for their artillery which only they or squad leaders can designate. Squad leaders need to stay alive so that squad members can spawn on them and get to the front lines quicker. Voice communication is a must, although as it stands with the game having just released a coordinated team can be hard to come by. This will likely improve as the community matures, but be prepared for some frustrations early on as players opt to ignore the success of their team in favour of improving their kill/death ratios.

While the maps in Heroes of Stalingrad were mostly wide and open with towering structures often placed at large intervals, the maps in Rising Storm are much more focused in their design. All of the six existing maps are in the attack/defend variant of Territory mode, where the defenders must prevent too many attackers from entering and capturing a series of pre-determined zones. The maps included so far in Rising Storm are quite different from one another; Guadalcanal and Hanto feature dense jungles and little cover beyond trees and the occasional wooden bunker. These make for some tense moments for both sides of creeping around in the trees, trying to determine if that person moving in the bushes fifty yards away is friend or foe. Friendly fire is always on, and always a serious hazard when playing on these maps.

Other levels are more open, depicting desert islands littered with trenches and the odd bombed-out building. Saipan is the only urban map, with fighting progressing from a beach assault through a series of streets and a rail yard. Iwo Jima is deadliest map, with the Allies attacking an exposed beachhead veritably bereft of cover for the attackers but littered with trenches and concrete bunkers occupied by the defending Japanese. The atmosphere and play styles are surprisingly varied between levels, and given how different the experience is between the two factions the maps can be played many times over without starting to feel stale. Tripwire has promised to add more levels in the future, meaning the amount of content received for the asking price is more than reasonable. 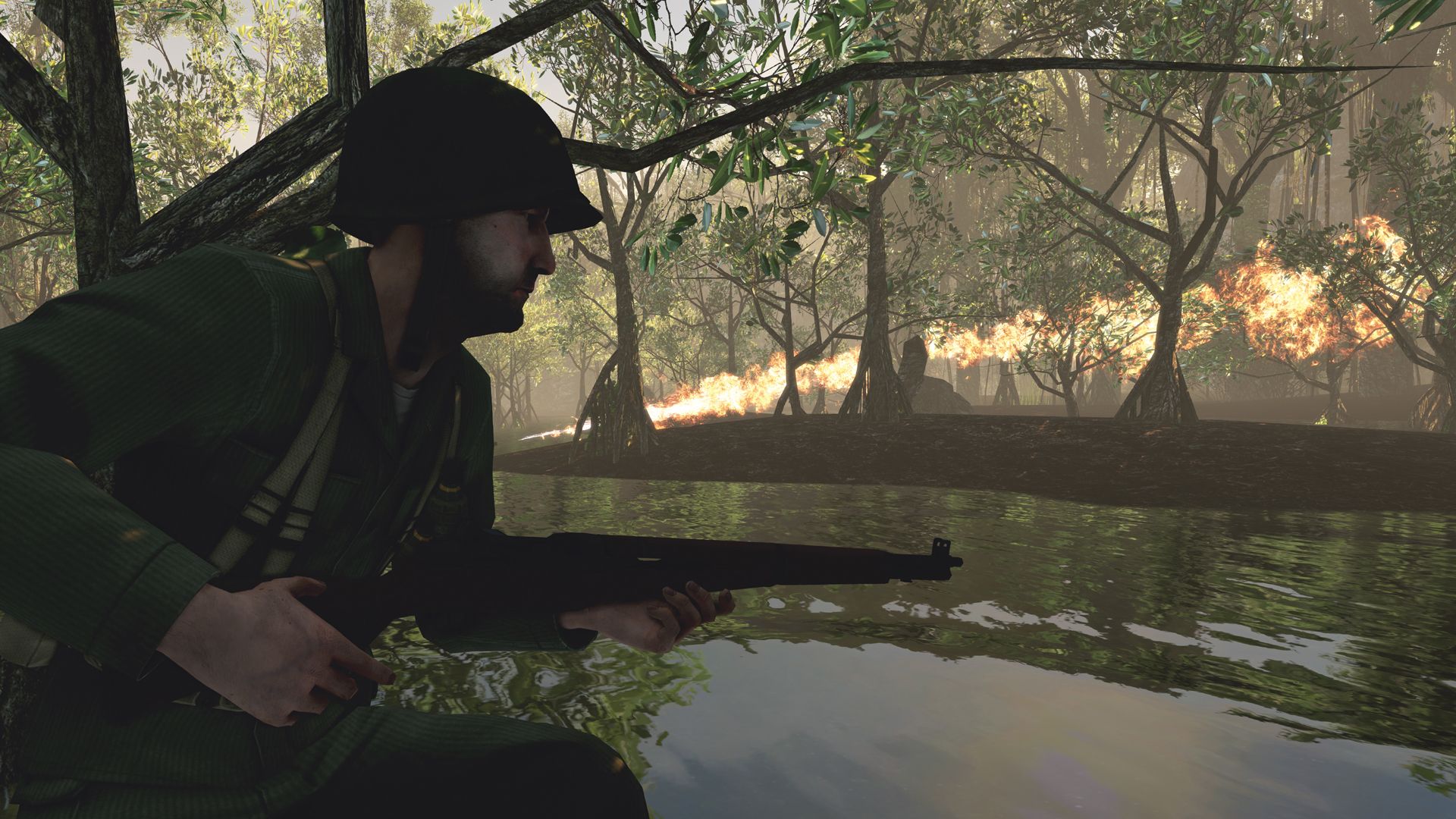 Camping in the bushes is sometimes the smartest way to play

When Red Orchestra 2 first released, it was plagued by serious bugs that greatly damaged the quality of the experience. Rising Storm is a much more polished game, but it is not without its quirks. One of the biggest issues is network lag, seemingly present on all high population servers. Pings will spike server wide on a fairly regular basis, resulting in some frustrating lag that might rob you of a kill. The game also boasts an overly sensitive anti-cheat system which accuses players of speed hacking if they move from one part of the map to another too quickly, which causes the server to lag and players to run in place for a few seconds. This can be especially problematic when a Japanese team is in the midst of a Banzai charge. Animations might break, and gun models might disappear, but these issues are infrequent and only serve to spoil the immersion. Still, spawning on squad leaders now works consistently and none of these issues are game breaking.

Heroes of Stalingrad wasn't the most visually impressive shooter around when it released in 2011 using the now aged Unreal Engine 3, and the same holds true for Rising Storm. Some maps looks quite good, in particular Guadalcanal which takes place at night with good lighting and superb ambience. Other maps however look bland and expose the dated technology powering the game, with Iwo Jima being the worst offender with ugly textures and dull lighting. The upswing of this is the game runs quite well, even on dated or weaker hardware, and I never experienced a crash or freeze.

The audio of Rising Storm is significantly more impressive, with sharp weapon sounds that are very much unique from each other. You will quickly learn to identify the different sounds each weapon makes, allowing for identification between friend and foe. One interesting trick the Americans can perform with the M1 Garand is to fake the distinctive sound of the clip ejecting, the ping informing the Japanese that a nearby American soldier has an empty clip and is reloading. Faking the sound might lure a Japanese player into the open while in reality the American is still ready to fire. The music changes depending what side you are fighting on, but it is uniformly excellent and does a tremendous job of setting the somber tone the game propagates so effectively. To add to this, soldiers will constantly chatter both about what is going on in the battle and about the general situation of the war and living conditions in the Pacific. 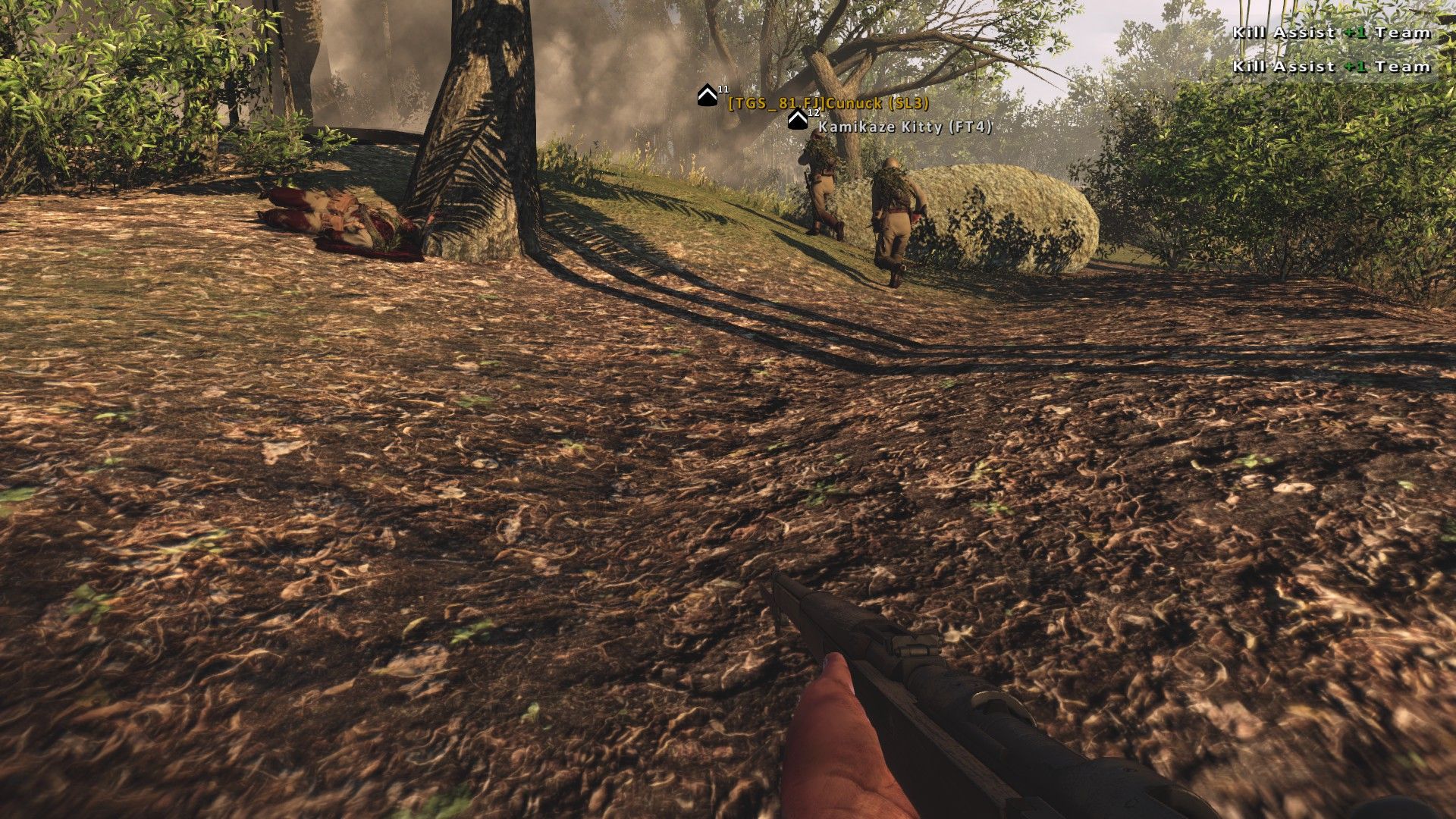 While Rising Storm may not be able to compete with industry juggernauts in terms of production values, the interplay between the two factions and superb map design make for an extremely engrossing and intense experience. The game is well set up for team play, and is at its best when communication is used to coordinate assaults and defensive positions. Rising Storm is a no brainer for those who enjoy realistic team-based first person shooters, and might just make a few new fans of the genre.

75
The game is well optimised and stable, but network lag can be an issue.
Overall
86
An excellent addition to the franchise, Rising Storm is a compelling and atmospheric game with some unique gameplay additions that further enhance the tremendous core experience. 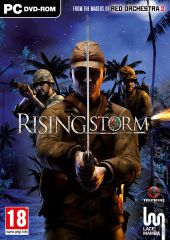