An effective reskin of Far Cry 3 with parodies, cyborgs and scientists

Far Cry 3 Blood Dragon is an excellent standalone reskin of the best first person shooter from 2012. Blood Dragon’s story is unrelated to the narrative of Far Cry 3, but the core mechanics are near identical. The setting is a 1980s vision of the future with enough satire to destroy a small country. You assume the role of a Mark IV cyber commando, Rex Colt, sent to an island to save the world from Colonel Sloan. The Colonel has harnessed the power of blood dragons, alien beasts that shoot fire from their eyes, and controls an army of cyborgs known as Omega Force. Dr Darling, trusted ally and love interest, is the leader of a group of scientists opposing Sloan. She will help you seize the island and reach your true potential. 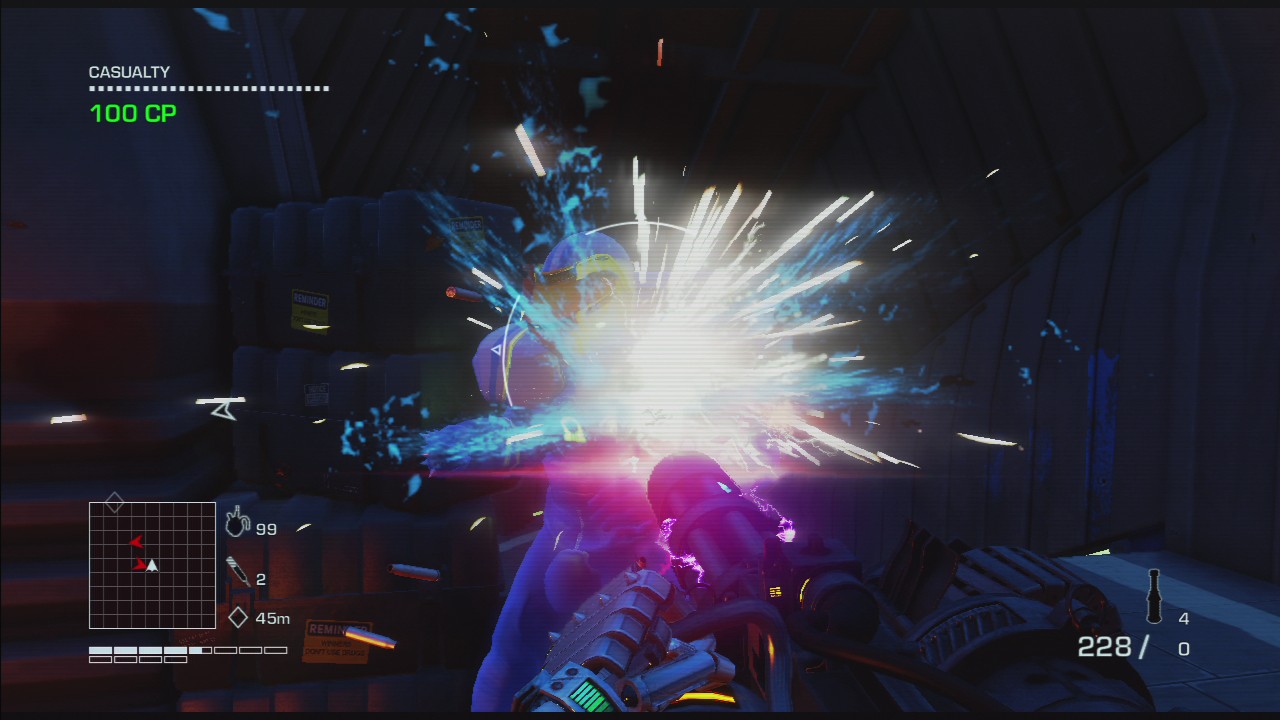 Omega Force soldiers are no match for Rex Colt's chaingun

The island you need to liberate is a modified version of the right half of the southern island in FC3. Additional roads, caves, hi-tech facilities and ruins are scattered throughout familiar geometry. There are no antennas to ascend this time, as the map is fully exposed from the beginning. You can travel across the island using jeeps or gliders, but fast travel and leg power are adequate solutions when the hotspots are contiguous. You will frequently stumble upon battles between scientists and cyborgs, but they pose little threat. Garrisons present a more fitting, albeit optional, challenge for Rex and his advanced cybernetics. Rex’s hydraulic legs are immune to fall damage, so he won’t die after falling 10m like Jason Brody in FC3. Despite using the same island as FC3, you will never feel like you are retracing Brody’s steps.

Gameplay mechanics are a carbon copy of FC3 which means a focus on stealth, melee takedowns and surveillance. Familiar weapons, like the flame thrower and assault rifle, give the player a similar offensive tool set. Weapons can be upgraded using money collected from pilfering containers or bodies. It’s easy to revel in the stopping power of a quadruple barrelled shotgun or the damage produced by explosive sniper bullets. Rex’s cyber eye functions like the binoculars in FC3, allowing you to tag enemies and survey the area. You gain skills as you level and it doesn’t take long before you are performing heavy take-downs or satisfying chained kills. This gradual increase in skills is perfectly balanced with the introduction of harder enemies. If you have played FC3, you will quickly relearn the effective techniques for dealing with enemies across the island.

There is more humour in Blood Dragon’s campaign when compared to FC3. Hilarity begins with a rapid succession of intrusive tutorials that explain how jumping makes you go higher. Michael Biehn (Aliens) voices Rex Colt and repeats quips that would make Duke Nukem jealous. He’ll scream delightfully when firing the Terror 4000 chain gun and exclaim superiority after you eliminate enemies. Friendly scientists believe they are immortal because they graduated from Yale. Load screens may explain how the ‘Takedown Drag’ skill is unrelated to cross dressers. Even the side missions are worth reading for their dry humour. The effective jokes are a pleasant contrast from most shooters that opt for a more serious tone.

Story missions continue the humour with parodies of popular gaming clichés. You’ll need to hold off waves of enemies while you wait for doors to open. These sequences are purposely absurd with countdowns or commentary. The game intelligently demonstrates pitfalls of modern game design. It’s hard not to chuckle when you hear about a delivery of explosive red barrels or special phrases that arm grenades. Even an escape elevator is slowed for dramatic effect while you fend off deadly attacks. Unfortunately, there is a late sequence that is little more than a shooting gallery against endless zombie hordes. Here it becomes what it previously and successfully parodied, but without the cleverness. Despite this late blemish, Blood Dragon parodies gaming mechanics while remaining entertaining. 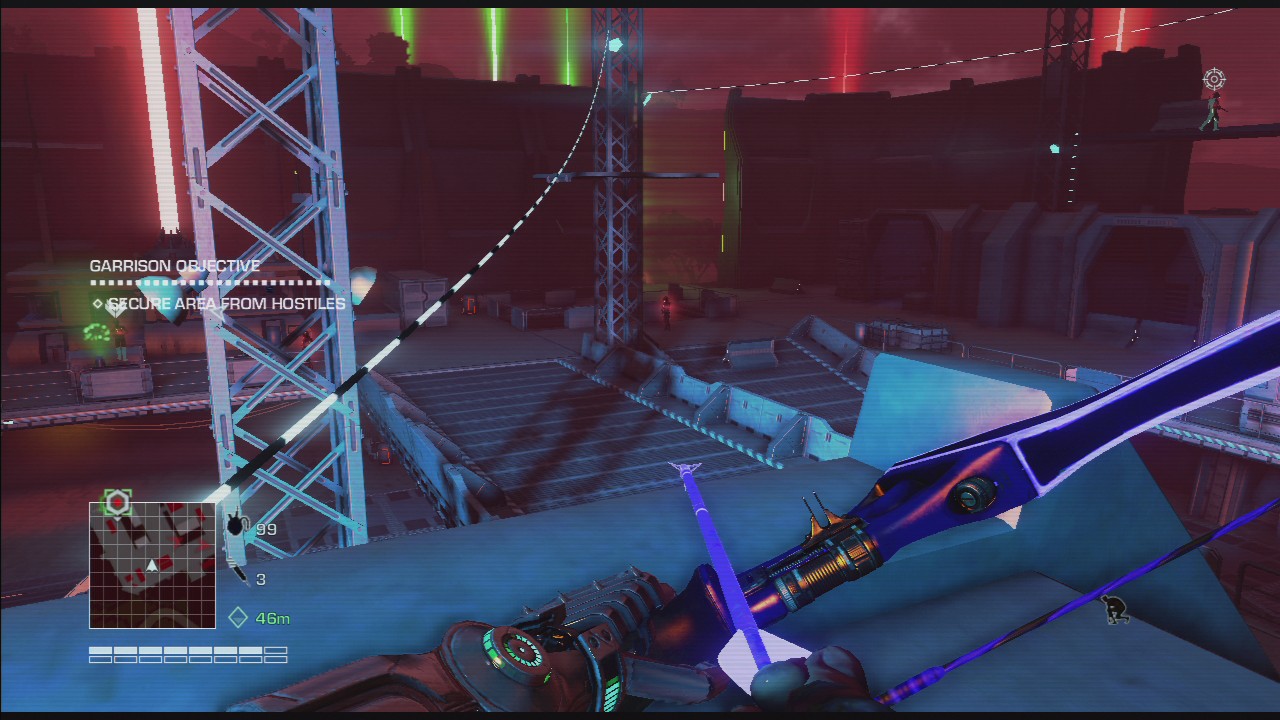 Outside the campaign, the biggest source of entertainment comes from capturing garrisons. Garrisons are a mixture of science facility and fort that replace the outposts from FC3. Garrisons are typically more interesting than FC3’s outposts due to expressive level design. There is more vertical space and deeper interiors which encourage climbing, zip-line use, dragging bodies and deaths from above. Despite their high walls, it’s usually quite trivial to breach garrisons. The hardest part is picking apart patrols and killing cyborgs before alarms bring reinforcements. The garrisons that float on the ocean require a different approach, but they are no less satisfying to capture. Once you eliminate all foes, friendly scientists assume control and additional side quests are unlocked.

Stealth is important when infiltrating garrisons, and mechanics have transferred seamlessly from its parent game. The bow is invaluable for mid range stealth takedowns and operates just as it did in FC3. Sneaking around and hearing musical chords akin to the Predator movie is almost worth the price alone. Entering garrisons and evaluating the area before executing the perfect stealth plan never loses lustre. Silent takedowns can be crucial when patrols overlap and the AI visual detection is nigh on perfect. Chained takedowns might be saved for the remaining enemies, but you’ll still enjoy the action if you are detected. 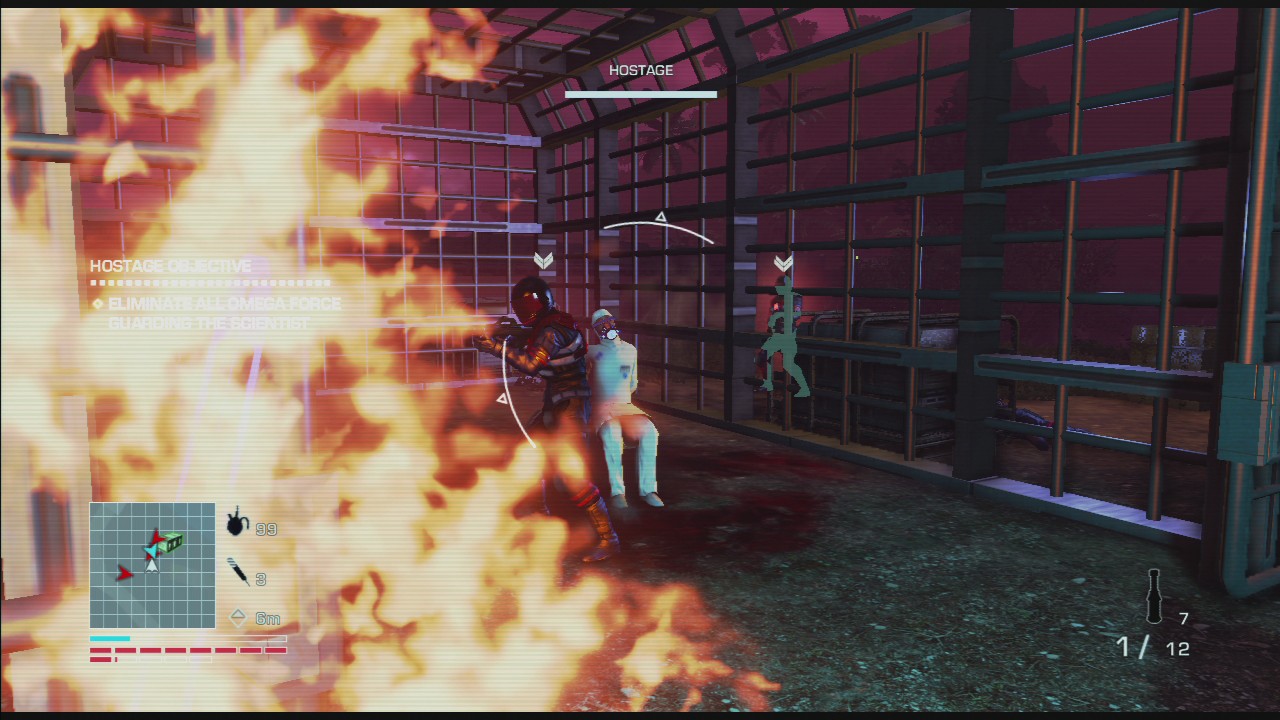 This nerd rescue is not going to plan. The plan said no fire

Hostage rescue missions are new form of side quests that mesh well with the stealth aspects. You must locate and rescue a scientist from Omega Force soldiers. If you are spotted, enemies may kill the scientist before you get the chance to save them. One mission placed a scientist deep inside ancient ruins, alerting guards outside quickly resulted in death for our lab coat wearing friend. These missions reward stealth, even if it’s only to remove the immediate danger and then open fire. Standard assassination missions and animal hunts return, but these pale in comparison to saving your neighbourhood nerd from blue blooded cyborgs. 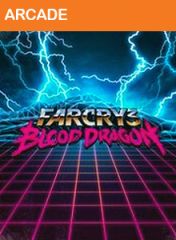