Scribblenauts is a series that allows the childhood dreams of every boy and girl to come true. You play as Maxwell, and anything you write down in your magical notebook comes to life before your very eyes. Not only that, you also have a device which allows you to travel anywhere in the world at a moment’s notice. Your sister, Lily, has been put under a spell which is slowly turning her to stone, so it is up to you to collect Starites, which are obtained by making the people around you happy. Helping to solve the problems of people around the world will in turn help you save your sister. This may sound lazy from a critical standpoint, but I feel it is the best description of the game: Scribblenauts Unlimited is just plain fun. 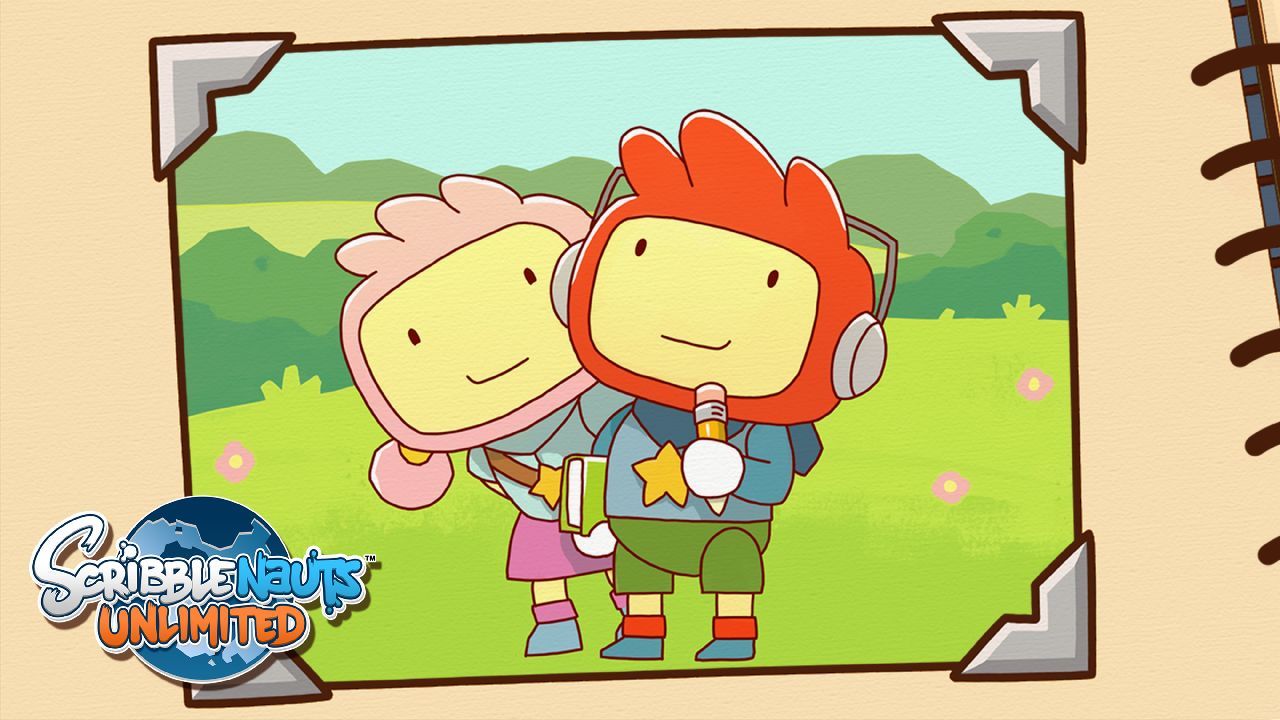 The world is split up into separate areas, each with a literary based pun in their name, the Vowelcano, Ampersand Beach and so on. All sorts of people and creatures inhabit these areas, most of which have some sort of problem. Maxwell can activate Starite Vision to see who exactly needs help, and then he simply needs to go and ask them what is wrong. They will give you a short description of their problem, and then it is up to you to solve it however you think is best. For example, an early level sees a kid having trouble with a bully. All he wants is to get to school, but the bully is in his way. So, you could use your notebook to make the kid big and strong, or the bully small and weak. Alternatively you could create something to distract him, or scare the bully away. Or anything else you can think of.

That is the really impressive thing about Scribblenauts Unlimited. The sheer amount of stuff you can create is mind boggling. Anything from a cat, to Cthulu, to the Ark of the Covenant, it seems like 5th Cell Media has thought of everything. When you get down to the really obscure items, there is a bit of crossover between the in-game models. For example, when trying to find something that had not been thought of, like I am sure everyone does at some point, I found that ‘brioche’ looked the same as ‘muffin’. Joking aside, I could create pretty much anything I wanted to, so it really lives up to the name of unlimited. 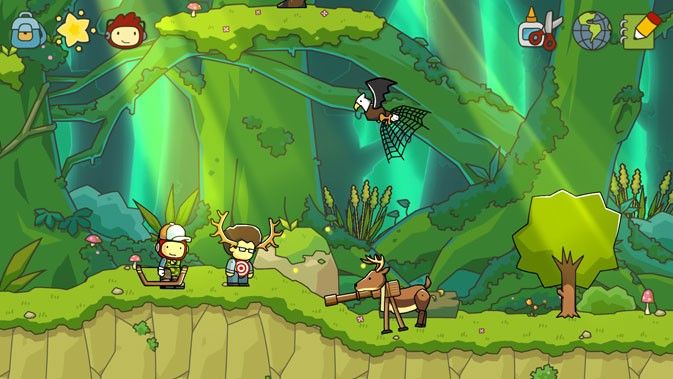 Most of the puzzles only take a few seconds to complete unless you want to get really creative. Longer puzzles come in the form of quests, which involve solving a variety of different puzzles each with the same theme. For example, one quest sees you helping out a guy on his big date. You have to hook him up with some new clothes, a nice gift, a romantic dinner and so on. These larger problems grant you a whole Starite piece, rather than the small chunks you gain from doing the quick challenges. The puzzles on offer in the quests are often more challenging, so there is a time based hint system to help you out. If you get stuck, you can simply wait for the game to give you another clue. Eventually, if you are really stumped, then you will just be told what to do, so you are never stuck for too long. This means that the game is not particularly hard, but most of the fun comes from finding inventive ways to solve puzzles, rather than the actual challenges themselves.

The presentation of Scribblenauts Unlimited is top notch, with cute cartoony visuals to match the children’s book tone of the story. The amount of work that had to be put in to not only think of objects to be created, but then also come up with believable models for, is quite astounding. Equally, the soundtrack is simply superb. Each zone has its own audio style, and the catchy jingle whenever you complete a quest is great. The standout area for me was the Vowelcano, with bubbling lava accompanied by smooth saxophone, flutes and tribal drums. Thankfully I did not experience any drop in performance, even when there were a lot of items or there was a lot of action on screen. 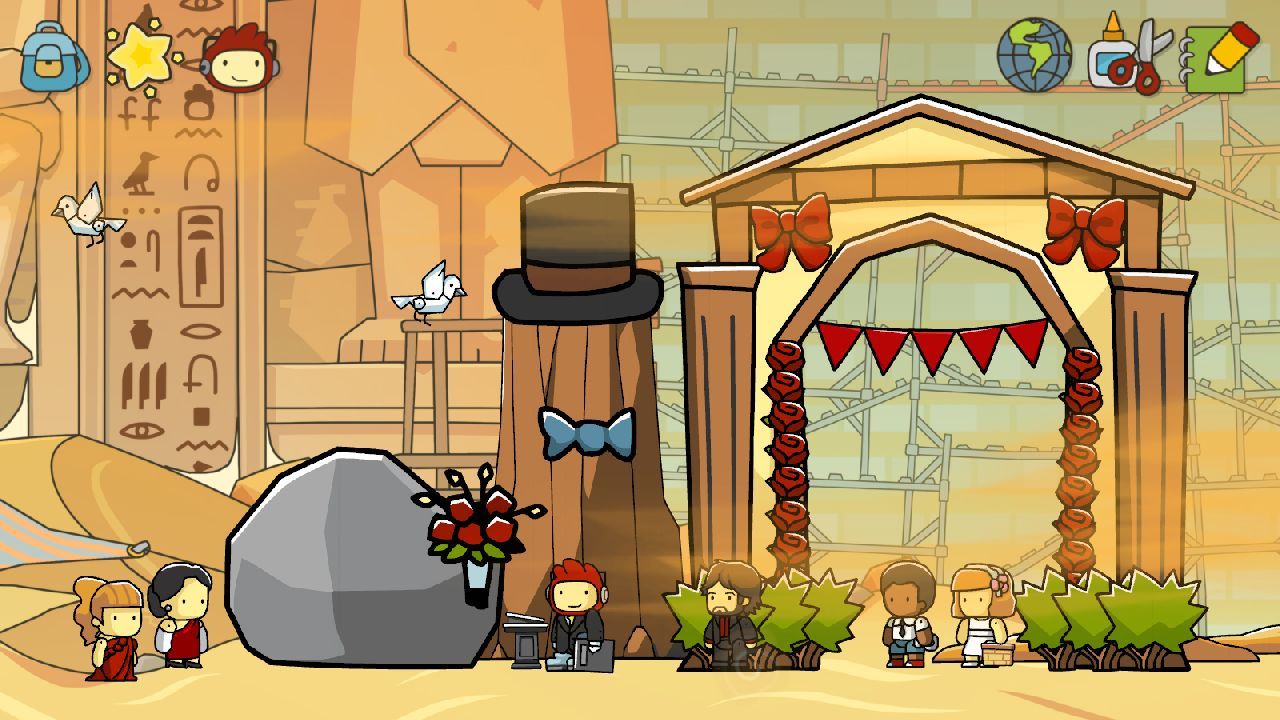 Unlimited also features an object editor, just in case something does not look quite as you would like. You can move pieces around, rotate them and change their scale. You can also change the default colour of an object, so if you want all the cars you create to be bright pink, then you are in luck. I never found much use for the editor, but it is a nice addition for people who want to play around with the huge number of items in the game. The editor is quickly accessed by just selecting the item you want to change, and puts you seamlessly back into the game when you are done.

I finished the game in around five or six hours, but that was only finding the minimum number of Starites. There is plenty of further playtime after you have “completed” the game, and you will certainly want to keep playing. It is likely you will have quite a few areas that you have not been to yet, and I even found myself replaying some areas to see how differently I could do them. Scribblenauts Unlimited is a game where you can let your imagination run free, and I will say it again: It is just plain fun.

Our ratings for Scribblenauts Unlimited on PC out of 100 (Ratings FAQ)
Presentation
90
Cute, high definition cartoony visuals backed up with an impressive soundtrack.
Gameplay
80
You are only bounded by your own creativity, the more you use your imagination, the more enjoyable the game becomes.
Single Player
88
The story mode is good value for its length, without becoming repetitive.
Multiplayer
NR
None
Performance
(Show PC Specs)
CPU: Intel i5-3470 @ 3.2GHz
GPU: AMD Radeon HD 7800
RAM: 8GB RAM
OS: Windows 8 Professional

90
Game ran smoothly, even with a lot of action on screen.
Overall
87
This is a game that anyone who played make believe as a kid will enjoy. Use your creativity to bring anything you can think of to life. 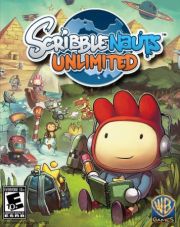