Imagine this scenario. You and a handful of fellow soldiers are hunkered down behind a ruined and overturned trolley in the middle of a large, crater-filled town square. Your objective is a massive, bombed out apartment complex 100 yards away. Well hidden enemy snipers are located in the upper floors of this building, and several others. The soldiers near you curse the Germans in the building, their own malfunctioning weapons, and their position in general. One peers around the corner of the trolley, only to be shot in the shoulder. He screams loudly and painfully while he bleeds to death. It is then that you hear the screech of incoming artillery shells. You can tell by the sound that they are going to land close to your position. The first one comes in 20 yards away, blowing one of your team mates into bloody bits. You have no choice but to move, so you and you're team mates leave cover and sprint towards your objective, bullets whizzing around your head. 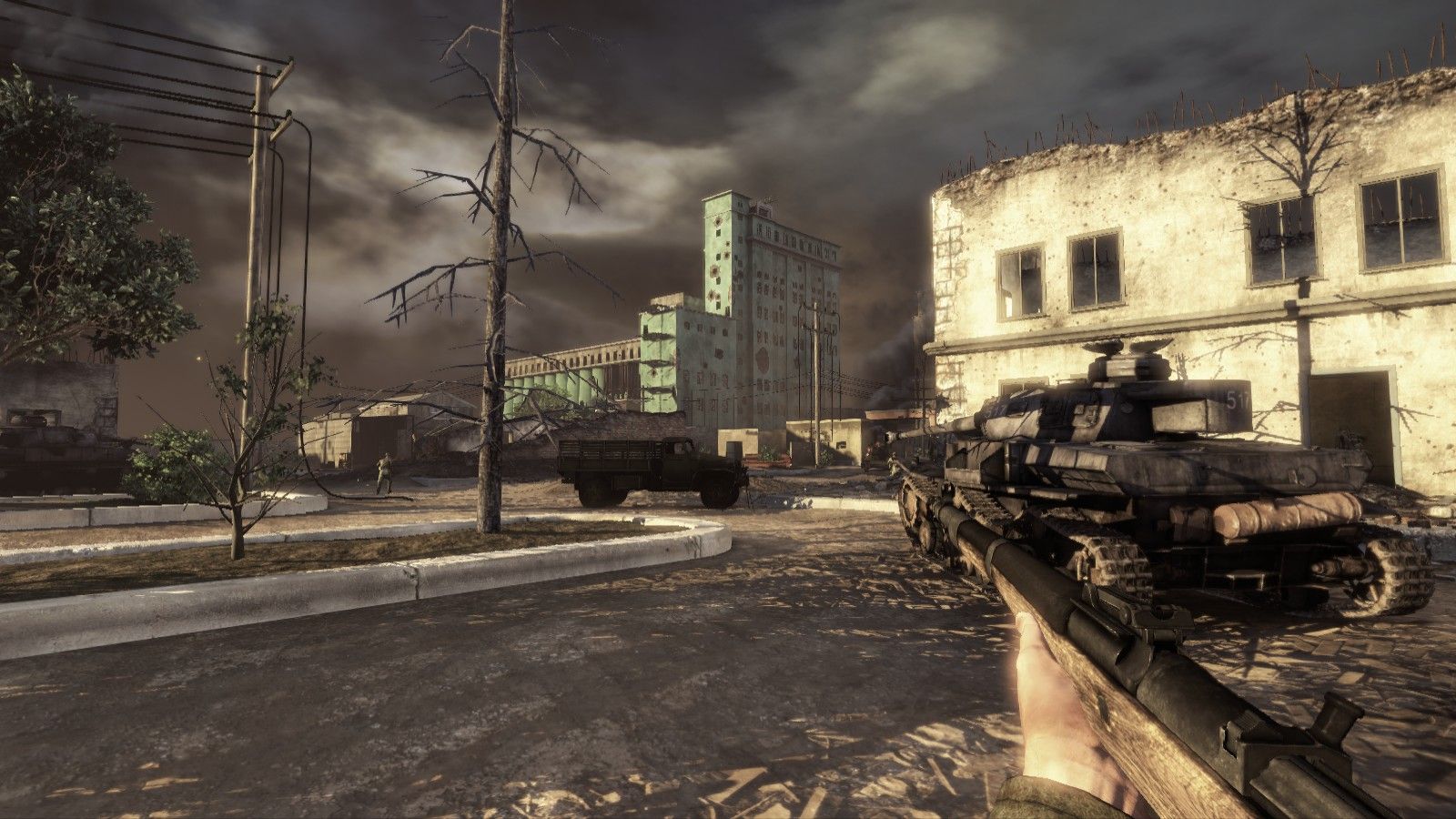 This may sound like a scripted event from one of the World War 2 Call of Duty games, but in reality it was one of the countless harrowing and fantastically cinematic moments I encountered in a multiplayer match of Red Orchestra 2. Few games have been able to capture the feel of the war torn streets of major city in World War 2 like this one has. While the highly realistic nature of the game might initially seem off putting, the great atmosphere and realistic shooting mechanics go a long way toward taking your frustration and turning it into awe and terror as you clamber about the game's vast and intricate maps. Unfortunately, despite having these great qualities, Red Orchestra 2 suffers from stability issues, terrible bot AI, and a small, albeit dedicated, player base.

While RO 2 boasts a full campaign, in reality it is little more than a glorified and horribly buggy tutorial for the game's multiplayer. Each level starts with a stylish intro explaining the context for the mission, but the missions themselves are essentially just multiplayer matches with bots. This would be fine, except for the fact that the bot AI is simply awful. Bots will sprint out into the open, only to decide after a long pause they would rather run back the way they came. They will take cover on the wrong side of walls. They will get stuck trying to jump over walls, and get stuck in glitchy animation loops. They occasionally kill you and each other with remarkable accuracy, but for the most part they run around like idiots and in doing so kill the immersion and atmosphere. It is useful to play a few levels of the campaign to get used to the controls and feel of the maps/objective types, but once you know the basics, there is no real reason to play through to the end. 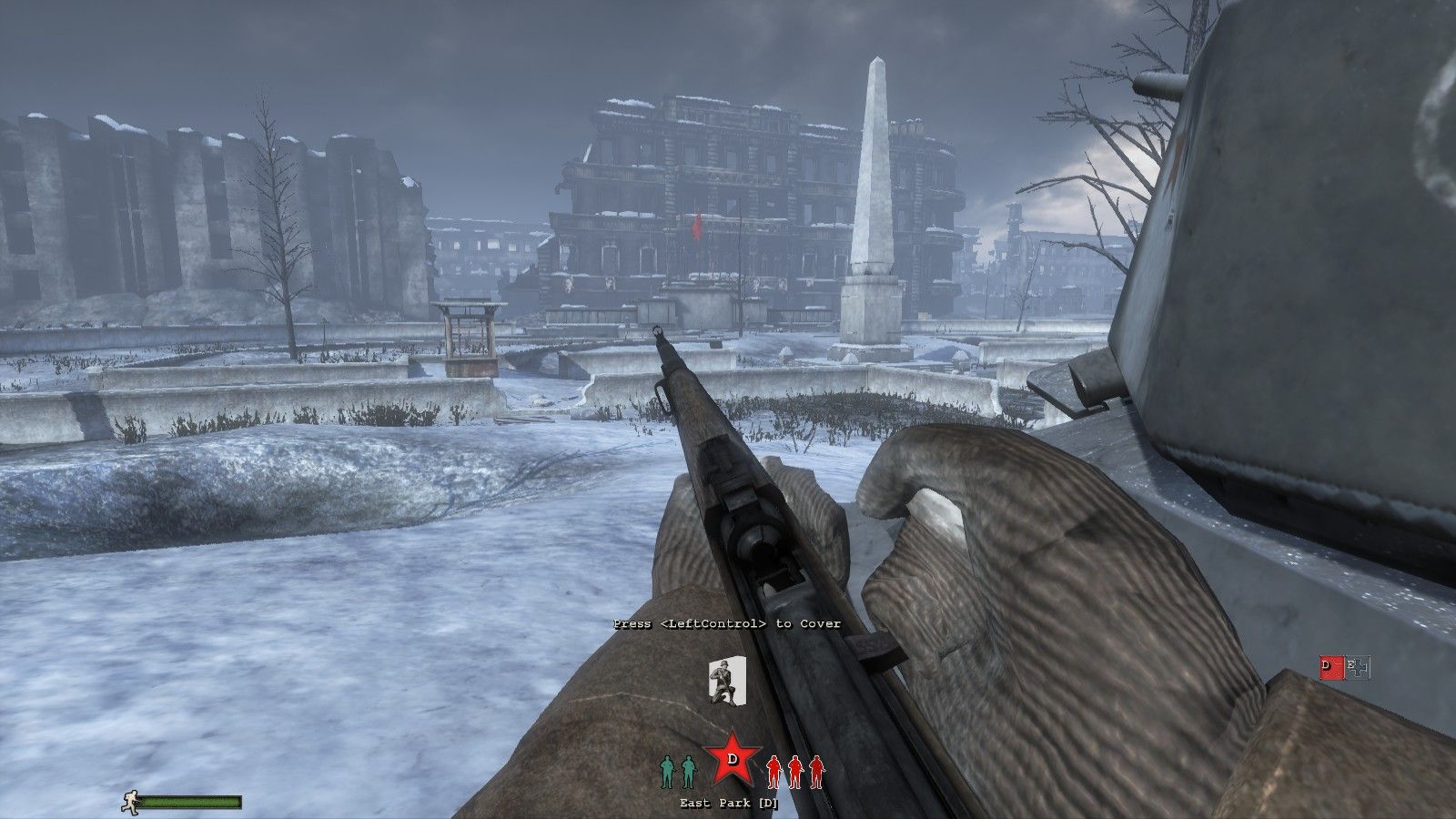 Once you decide to hop online, the experience improves dramatically, as real life players provide much more of a challenge, and do less to kill the immersion. In most servers empty slots are filled with bots, but their failings aren't as obvious if there are only a few running around amongst the human controlled players. There are a few different multiplayer modes, with the main one being territory assault. There are two variations on this mode, one which sees one team trying to defend a series of objectives, and one which sees both teams fighting for control of a series of different objectives. The objectives are usually strategically valuable locations such as factories or houses, and in order for one team to capture an objective, they need to have more players than the opposing team in the objective area. When you die, you will be able to respawn as part of a wave of reinforcements, which come in about every 20-30 seconds. This system works very well as it is realistic but not overly punishing, allowing for multiple lives within a single game without pulling you out of the experience.

The other modes include Firefight, which is basically team deathmatch, and a variation on Territory Assault where there are no respawns. When you join a team in any version of Territory Assault, you choose a role and are placed into a squad. Each squad has a squad leader who can be spawned on if he cannot be seen by enemy soldiers. Each team also has a commander who can give orders and call in artillery strikes. Good communication between players, squad leaders and commanders is essential, as the placement of things like artillery strikes and smoke grenades, which only squad leaders have access to, are of crucial importance when trying to break through enemy defenses. While it sounds like these many factors would lead to a cluttered HUD, a clever 'tactical view' button ensures that you're screen is free of clutter until you press a certain button which will display information such as the whereabouts of your objectives, how many remaining reinforcements your team has, and the remaining time in the match. 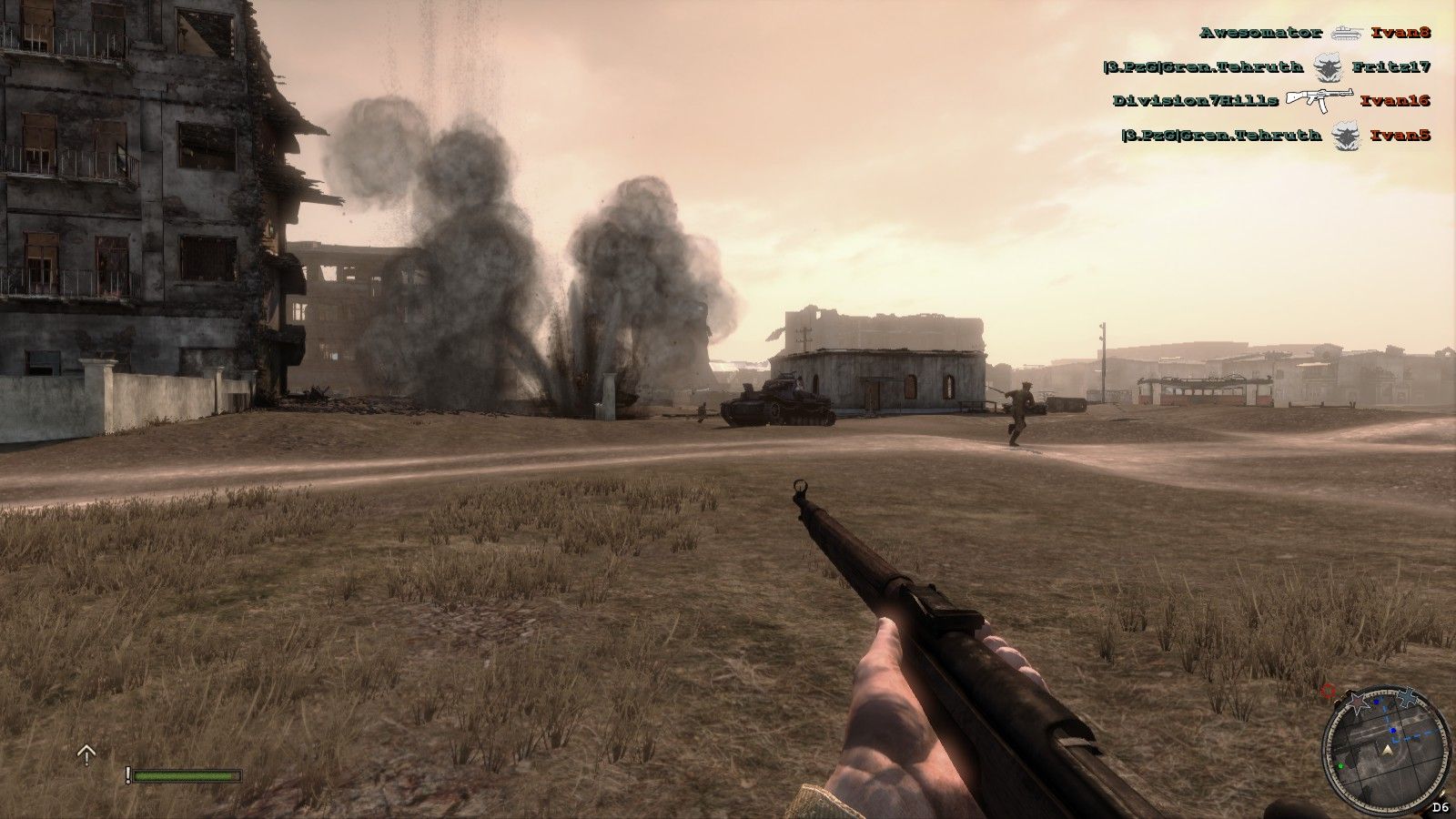 While Red Orchestra 2 does contain leveling and weapon upgrades, they aren't as important or prevalent as in many other online shooters. As you play, you increase your 'honour' level. There aren't many benefits to leveling up, it mostly just serves as a veterancy status. You do unlock a couple of weapons as you play certain classes a lot, but they are few and far between. You also level up individual weapons as you get kills with them. You will eventually unlock attachments for these weapons, such as a bayonet or scope, but they aren't necessary to succeed in combat.

When it comes to the actual gameplay, Red Orchestra 2 will initially seem very complex. You can take cover behind walls and peek out for shots, adjust the sights on your weapon for more accurate shots at different ranges, peer beneath the scope of your sniper rifle for close range encounters, and hold your breath while aiming down the sight of any weapon for increased stability. However, the different functions are all so intuitive and well mapped out on the keyboard that you will very quickly get used to them. Guns feel satisfying to shoot, but also have a feeling of authenticity; automatic weapons are extremely inaccurate, and weapons will misfire so that seemingly well aimed shots won't always hit their target. The realistic gunplay might seem frustrating at first, but given that you die extremely quickly it's good that weapons aren't perfectly accurate so that you can made those wild dashes across the landscape and still survive. When you are shot, most of the time you will die instantly, but if you are hit in a non-lethal location you will have the chance to bandage your wound and keep fighting. Other times, you will slowly bleed to death; you maintain control for a few seconds while your screen fades to black. 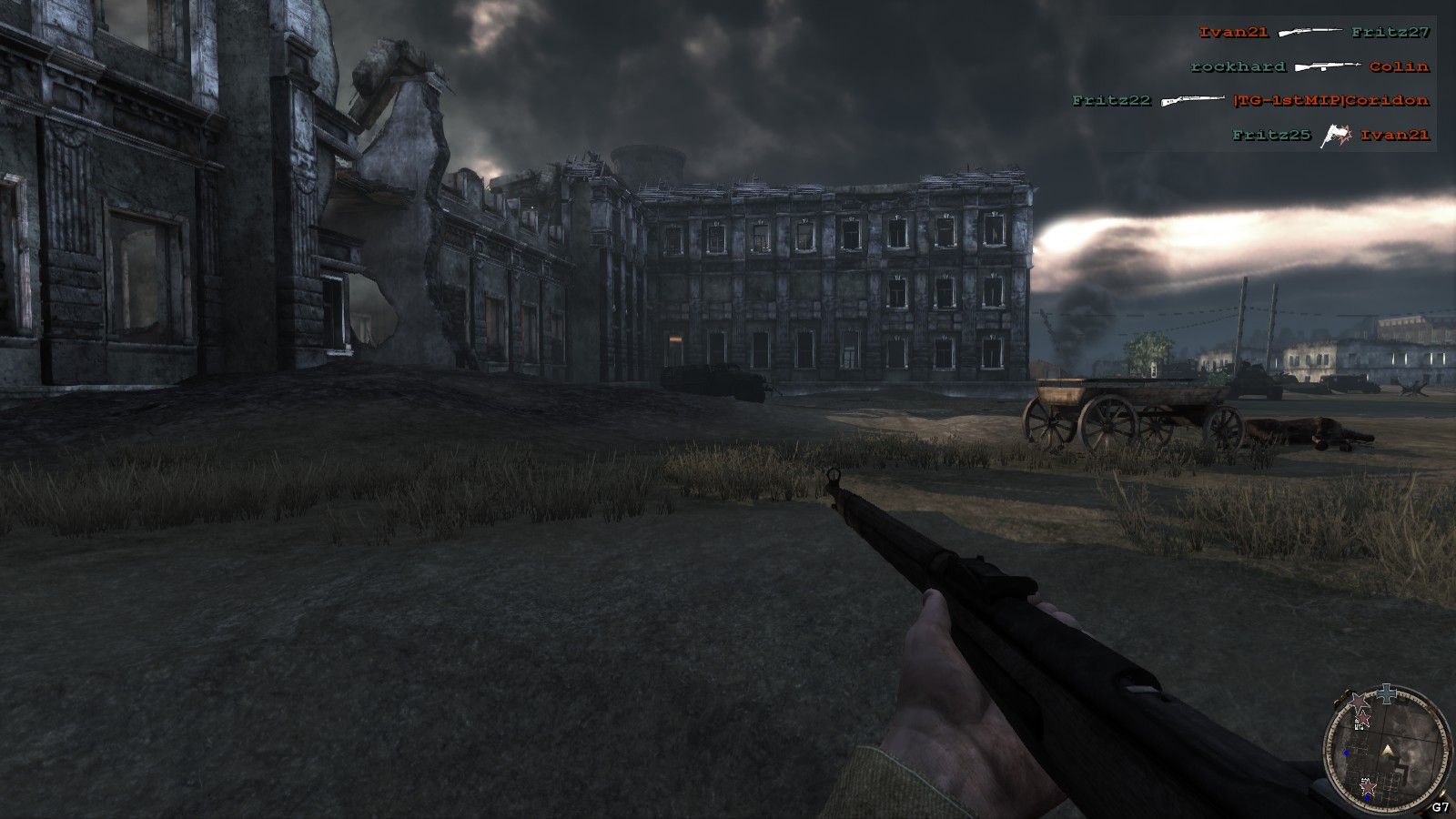 In order to further enhance the realism, there is a form of suppression that can obfuscate your accuracy and combat ability. If shots are whizzing near your head, or artillery shells landing nearby, you will shake, your heart will pound loudly, and colour will drain from your screen. While under the effects of suppression, you can't aim very well or move very well, so it is best to find cover and stay there until you regain your senses. There is also a stamina meter for sprinting, but this is handled differently from most games. You can sprint fully until it runs out, although you keep sprinting after this, but more slowly. You will also become more tired so that if you are trying to take shots after your stamina bar is depleted you will be less accurate. Both of these elements are very subtly implemented, but do a lot to make the game even more immersive, and make the simple act of staying alive thrilling.

The audio in Red Orchestra 2 also goes a long way not only with helping immersion, but also providing valuable information for the player. The soldiers in RO 2 are very talkative; sometimes they will simply curse the enemy, or their weapon when they have to reload. They will also complain of needing a rest when your stamina bar is empty, yell that they are pinned down when under the effects of suppression, and yell that you have an enemy soldier suppressed when you have an enemy pinned down under the effects of suppression. Similarly, weapon sounds can quickly be identified with individual weapons and different sides. There were a few times when I would be skulking about in the lower floors of a building and hear footsteps on the floor above me. You have no way of knowing what side this soldier is on, but if they shoot, you can often identify the weapon and the side of the soldier. 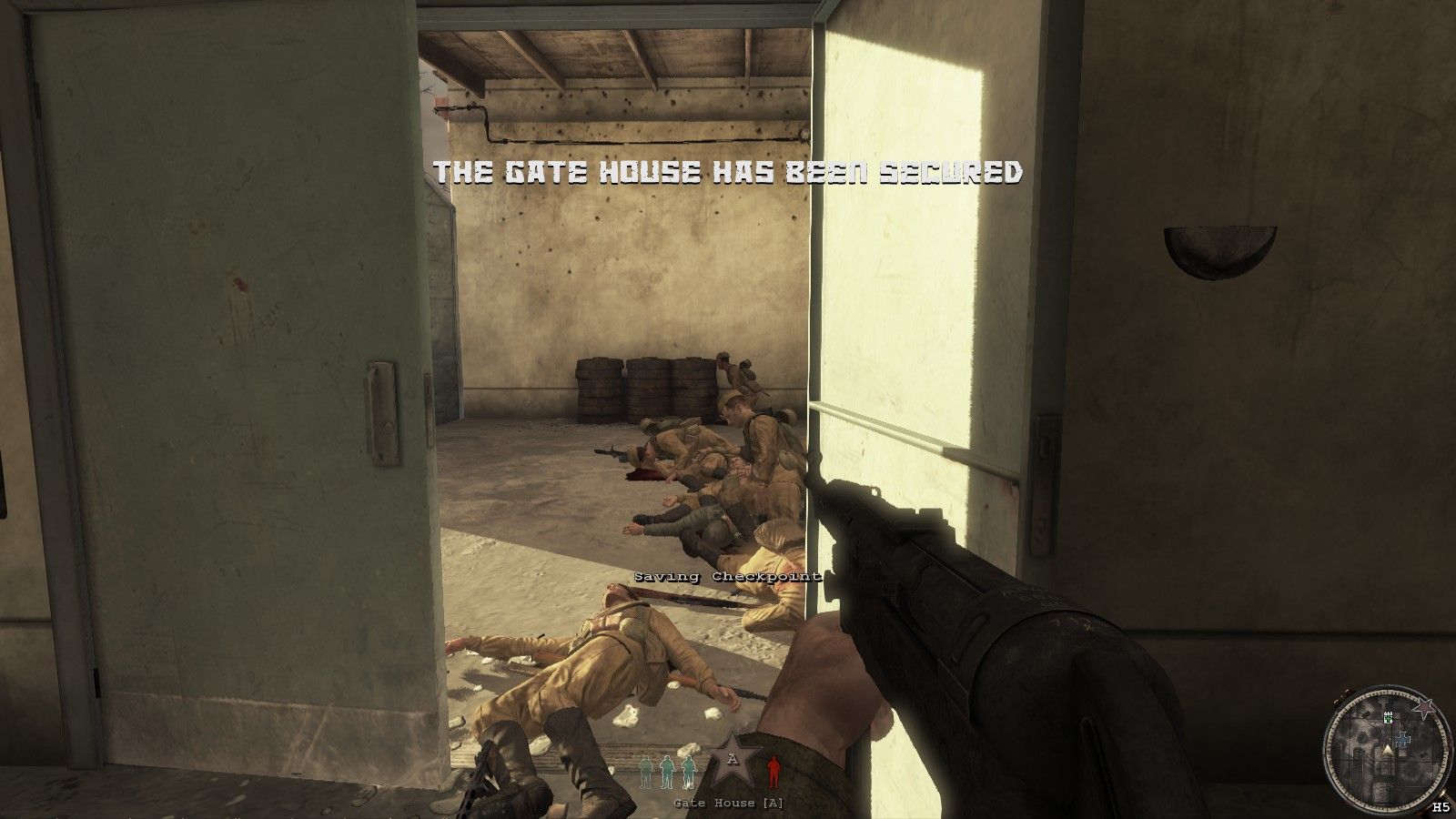 While the visuals in Red Orchestra 2 are technically unimpressive, the massive and highly detailed maps more than make up for it. The game doesn't always run perfectly, and netcode issues might rob you of a couple kills, but most of the technical snafus present at launch have been ironed out. Details such as different reload animations for weapons depending on how many bullets are left in the gun when you reload really help draw you in. As mentioned above the sound design is stellar, and the music, while forgettable, works well with the game. If you have a penchant for realistic but not overly complicated historical shooters, Red Orchestra 2 will thrill you to no end with its amazing attention to detail and atmosphere that does a great job of conveying the horror of war. As it stands, the game's biggest issue is simply the small player base.

Our ratings for Red Orchestra 2: Heroes of Stalingrad on PC out of 100 (Ratings FAQ)
Presentation
85
Visuals aren't technically amazing, but large and very detailed maps, combined with stellar sound design and a nifty HUD, make Red Orchestra 2 a feast for the senses.
Gameplay
90
This is as close as you will get to fighting the battle for Stalingrad. Great shooting with complex gunplay mechanics, an interesting cover system and brilliant immersion make RO2 a thrill to play.
Single Player
40
A series of contextualized but extremely buggy bot matches that are good for getting used to the basics and nothing else.
Multiplayer
90
Despite a small community, Red Orchestra 2 offers an intense and realistic experience that is very unique within the competitive FPS market.
Performance
(Show PC Specs)
CPU: Intel Core 2 Duo e7200 @ 3.1ghz
GPU: Powercolor Radeon HD 5850 PCS+
RAM: 4GB DDR2
OS: Windows 7 Ultimate 64 bit

65
It takes a surprising amount of power to run Red Orchestra 2 smoothly on the highest settings, and it suffers from some minor netcode issues that might rob you of a couple kills.
Overall
85
Once you get past the not-too-steep learning curve, RO 2 will provide fans of realistic war-themed shooters hours of very high quality entertainment that can't readily be found elsewhere. 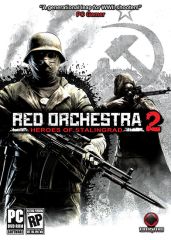