Ace Combat: Assault Horizon is the latest release in the long running air combat series with a significant fan following. Focusing on story and gritty combat, this latest release does well to provide quite a few hours of entertainment to all fans of action in the sky. Assault Horizon doesn’t offer anything significantly new to the genre, but what’s there is fun and decently long lasting. An enjoyable single player campaign, decent multiplayer offerings and often visceral, if perhaps simplistic, air combat make Assault Horizon a worthwhile entry in the franchise. 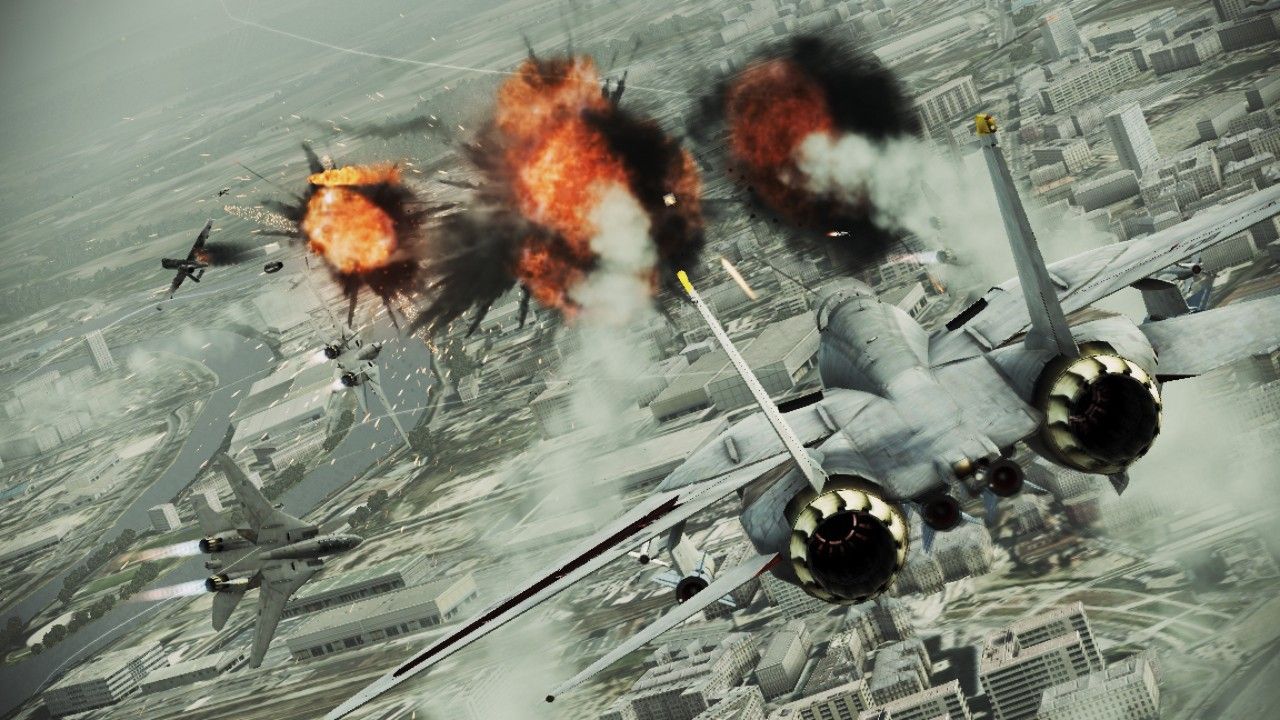 The plot of the game centers on Bishop, the leader of the Warwolf Squadron of airplanes, which is part of a large multinational U.N. military force composed of NATO and Russian forces. The squadron, along with a few other characters you will get to play as, is sent to Africa based on orders that local rebels have been terrorizing the population in the country and must be stopped. During a routine mission, a large bomb goes off, thus revealing that rebels posses a new type of weapon. Upon further investigation, Bishop realizes that the rebels were supplied with these bombs by a Russian criminal organization which aims to take over its own country before attacking others. Thus begins a plot which actually has some nice twists and takes places in the skies above a variety of world locations. There is also a running subplot between Bishop and his arch nemesis, pilot Markov.

While this may all sound very familiar and can be attributed to almost any modern action game, Assault Horizon’s campaign does have a few things going for it. The story is easily more sophisticated and detailed than something like HAWX, with a lot of scenes actually taking place on the ground, as you get to know the names and faces of other characters. On the other hand, nobody has much personality and the dialogue can be very poor most of the time, perhaps lost in translation for the Western release. In-flight, there is also a lot of chatter but it’s often lost or ignored because of your preoccupation with the action on-screen. Missions are fairly lengthy, sometimes actually letting you pilot different aircraft within the same conflict, and progress checkpoints can be fairly unforgiving. The campaign can be finished within 5 or 6 hours, but it is indeed mostly enjoyable, and has considerably more impact than the HAWX campaigns.

Ace Combat is all about air domination, and the game excels in this area for the most part. There are opportunities for take off and landing, tons of dogfighting and ground target attacks, and even bombing runs. There is a decently large amount of airplanes in the game, offering stat comparisons and a selection of your choice before most missions. Flying feels good, and very much on-par with other games in the genre. It’s standard stuff for a flight arcade these days, but the game runs into a bit of trouble when it comes to some of the core gameplay. 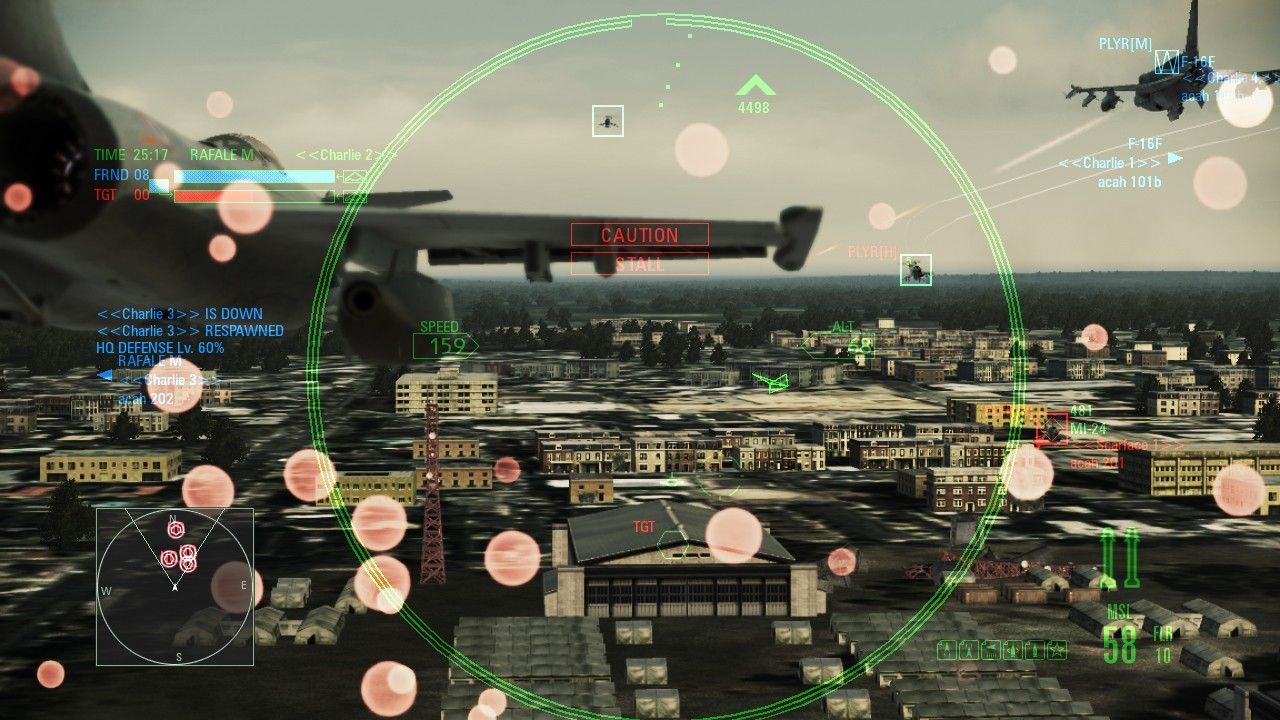 The camera, for one, often feels positioned too closely to the aircraft in third person mode, which in return takes up a lot of the screen. Most of the combat in Assault Horizon doesn’t actually take place in open space like most other titles. You could, of course, play in this manner but the results would be abysmal. Firing rockets and miniguns at locked-on targets in the distance most often results in misses and evasions, because the game is so focused on almost forcing the player into the dogfighting mode. Essentially a minigame, the player can engage the mode any time they are near an enemy plane. The camera then zooms and essentially becomes your aiming reticule – you are no longer handling the plane controls, but rather focusing on your aim and taking down the target. It’s a neat idea, and allows for some very gritty and in-your-face effects and takedowns of enemy aircraft. On the other hand, you are forced to do it so much during the game (because other methods are, as mentioned, not at all as effective) that it actually outlives its welcome at times. It’s a solid mechanic, but it would have been nice to have a choice to use it, rather than being pretty much forced, in order to be effective in battle.

Regular enemies can be taken down with the usual long range missiles, but priority targets, which only you must eliminate, can only be defeated in the dogfighting mode. Sure, this allows the game to take players on-rails through some exciting scenarios such as flying low to the ground and through buildings or obstacles. Evading works in a similar manner – if an enemy has you locked in, performing a maneuver requires timed controller input - and you’re behind your attacker, ready to dogfight again. Essentially, airplane missions in Assault Horizon (which involve enemy planes) can be summarized as a series of minigames that are mostly unavoidable, and that’s bound to upset some fans.

There is often friendly AI during combat, but as the trouble is with many games in the genre, they are mostly useless. Priority targets can only be destroyed by the player, so it’s unclear what purpose your friendlies serve during most missions. Enemy AI is a bit better, and can put up a good fight for most of the game. The only problem here is actually immersion – rather than having the enemy fly in from outside your zone, they simply spawn almost on top of you. Needless to say, that’s hardly realistic. 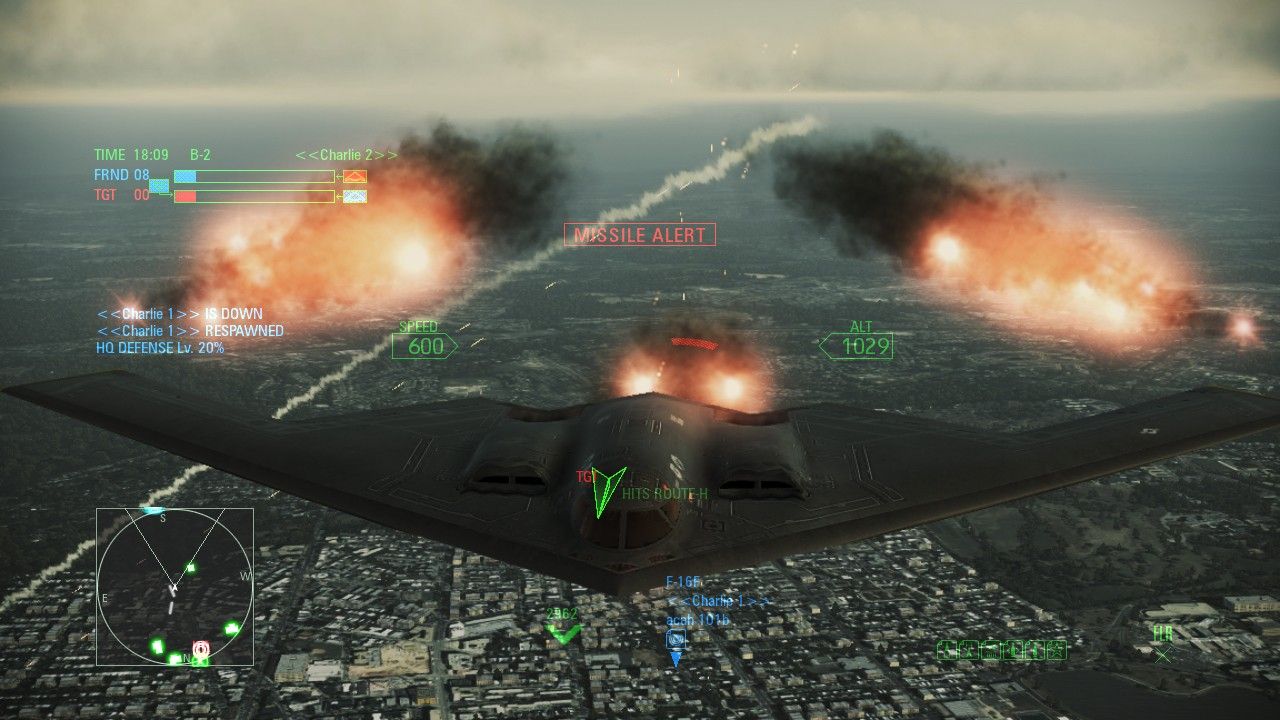 It’s not all about airplanes, though. There are some on-rail shooting missions when you are about a helicopter, usually supporting troops on the ground advancing against enemy forces. Bombing missions also take part in the proceedings, though they require overly high accuracy and go on for a bit too long. The key alternative to airplanes is the helicopter missions, where players have full control and can participate in combat across a fairly significant area. Helicopters control very well, do not have any minigame components, and are genuinely enjoyable to pilot skillfully. Controls are fairly basic and similar to planes, but ultimately provide greater control during combat.

The action transitions to online play rather smoothly. There aren’t many modes on offer, with competitive ones including deathmatch, capital conquest, and domination playing out in a similar manner. All of the mechanics from the campaign carry over to multiplayer, and the action feels just as satisfying with smooth control and absolutely no lag issues. Those looking for a cooperative experience can also take part in a number of coop missions, most being taken directly from the campaign. By playing online, players earn points which can be used to unlock new airplanes as well as abilities and weapons, adding some incentive to long term play. Aside from a lack of competitive modes, the bigger problem perhaps is the lack of players. Just a month or so since release, lobbies are barren and those few that exist have more AI opponents than real players.

Ace Combat is a respectably pleasant visual experience. Airplanes are well designed and offer full 360 degree view at any point of the game. Perhaps the most scrutinized area for all flight games, the ground, looks detailed enough to forgive some low resolution textures. It may not be completely real-world accurate, but the landscape and buildings were designed with care and present themselves well. Cutscenes and some story events are surprisingly interactive, actually allowing the player to look around (but not move), thus adding an interesting sense of immersion that is unseen elsewhere. Combat and destruction look great, offering detailed views of your enemies going down in smoke and pieces. Sound design is mostly forgettable with basic effects, but at least the soundtrack is very catchy and energizing. 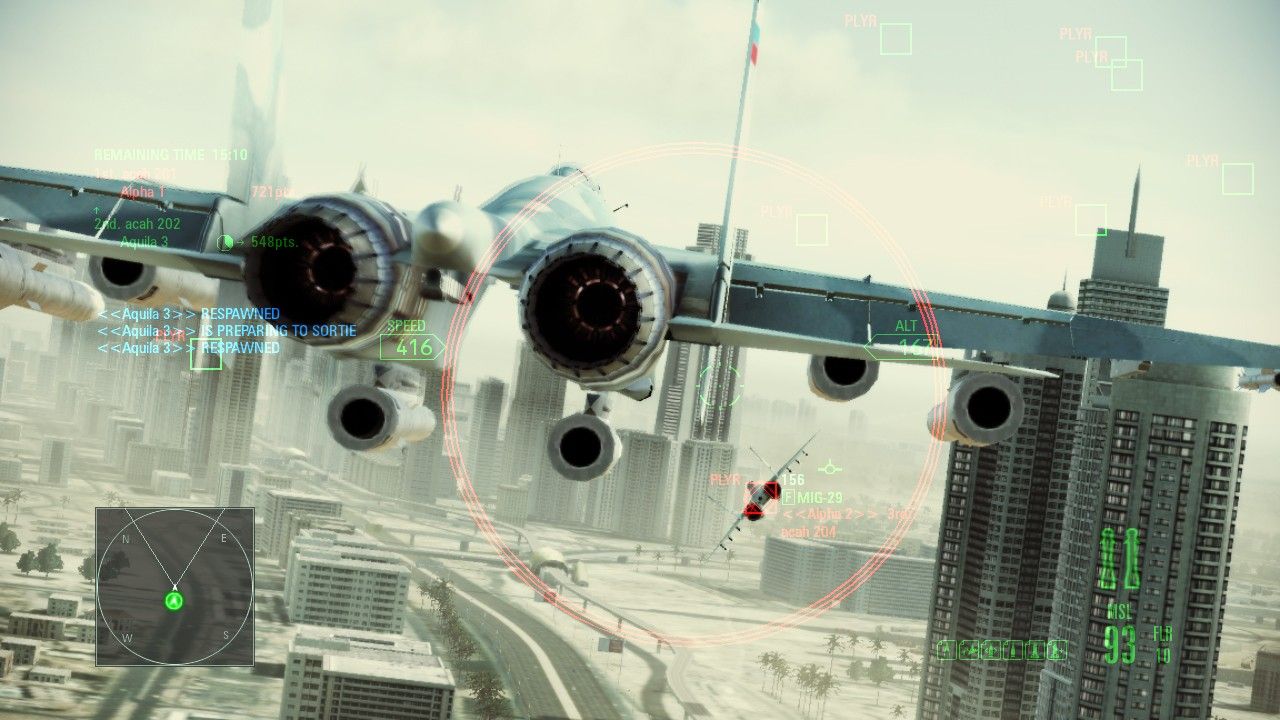 The return of the Ace Combat series is a welcome one. The game clearly attempts to become more accessible to the general public and perhaps borrow an idea or two from other flight games, which is OK. It’s a rather action packed thrill ride that is only let down by its own focus on forcing players into minigames during combat in order to be effective. A decent story suffers from poorly translated dialogue, but voice acting and cutscene visuals are mostly good. Online modes are a bit scarce, both in variety and player numbers. The game sounds well enough and looks great when focusing on destruction, amped up by a rocking soundtrack. It may not offer anything wholly original, but Ace Combat: Assault Horizon is a fun air combat title that’s well worth a look if you enjoy the genre.

Our ratings for Ace Combat: Assault Horizon on PlayStation 3 out of 100 (Ratings FAQ)
Presentation
74
Good visuals and solid soundtrack are coupled with average sound effects and poor dialogue.
Gameplay
80
The air combat is essentially filled with minigames, which all work very well and add to the intensity of the action. Both planes and helicopers handle well and are a joy to pilot.
Single Player
78
The decently long campaign has a few nice twists but most characters are a bit underdeveloped. Friendly AI is mostly useless but at least enemies pose a respectable challenge.
Multiplayer
79
Competitive modes are a bit lackluster, but coop can be fun as its a better way to complete the missions from the single player campaign. Online play is very smooth regardless of location. Lack of online players is a concern, though.
Performance
85
The game runs smoothly and without issue. Some checkpoint saves can be frustrating.
Overall
77
Ace Combat: Assault Horizon may lack any groundbreaking features, but it's still a fun air sim that's bound to please fans of the genre. With some unique - if repetitive - gameplay mechanics and a strong focus on destruction, it's a flight worth taking for those who choose to jump on board. 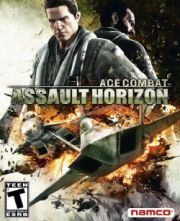