E3 11: Things are going to explode, and you know it

The first game that everyone saw during this year’s E3 was Call of Duty Modern Warfare 3, as a live demo was shown during the Microsoft press conference. Packing explosive action in the New York harbor, Activision continues to attempt impressing audiences with bigger than ever setpieces and striking visual imagery. The game’s plot picks up shortly after MW2, as Russia continues its assault on United States, with conflicts also breaking out globally in capital cities within Europe. We had a chance to look at the demo a second time during our visit to the Activision E3 booth, as well as a second level in the game.
First level, entitled Breach and Clear, offered us another look as we began underwater, swimming through what used to be a car tunnel. Vehicles were piled up, swept away by the water, and some even had the bodies of their occupants. Continuing forward, the team had to avoid a number of mines that have been deployed, until a large submarine passed overhead. Attaching a mine to it, the resulting explosion forced the submarine to surface, and so did the team. Revealed before us was the destroyed city of New York, scarred by an ongoing battle at both sea and air.
With the submarine on the surface, the team was able to climb aboard and begin their attack. Having made their way through the boat, the protagonist and his partner activated the on-board missile system in order to fire upon the enemy ships that were briefly seen stationed in the harbor. In a hectic escape, we made it out of the submarine and into a small boat, just as missiles began to fire. What resulted next was a grand chase through explosion-filled waters. 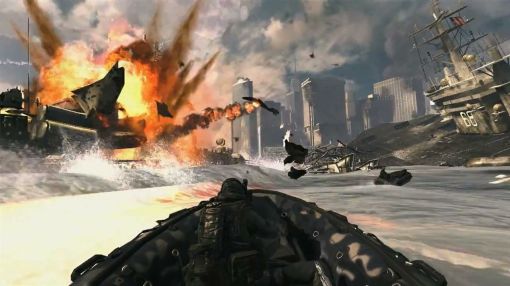 With the player at the controls, a race against the clock began as we tried to make our way to extraction. On a grand scale, we saw massive ships explode and begin to sink all around us, as we travelled with breakneck speeds right through the action. Smaller enemy boats also appeared, and our partner at the front did his best to clear the way and keep the enemy at bay. In trademark slow-motion moment, our boat ran up the side of a sinking ship, allowing the player to temporary let go of the controls and grab a rifle to dispatch a nearby enemy cruiser. Finally, the player made his way to extraction by riding the boat right into a rescue helicopter. The mission was dubbed a success as we flew off, overlooking a destroyed city.
A second level being showcased was much more subtle (at least at first). Joining a team of covert operatives, we were tasked with quietly infiltrating an enemy warehouse in order to get intel on a suspected weapons truck. Working with the team, we were able to stealthily eliminate all patrols and reach the warehouse without setting off alarms. Upon reaching the truck, however, the team discovered that it is empty. It seems the enemy has created an ambush and decided to move the materials on a subway train, thus the team had to fight their way out and attempt to catch up to the package.
What followed for a few minutes was the standard Call of Duty shooting sequence, as the team continually pushed forward while eliminating hostile forces. Having fought their way out of the warehouse and into a construction area, a friendly helicopter was called in to provide much needed suppressing fire and allowed the player to progress more easily. Upon reaching an enemy camp, the team realized that the package has just left a nearby subway station. Hopping into trucks, we gave chase. 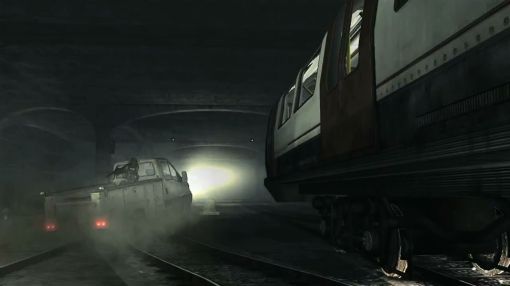 Driving right off the subway platform and onto the rail tracks, the player took a position in the back of the truck and began firing on the enemies aboard the train. This on-rails section went by with very fast speeds, as the player continuously eliminated enemies as they appeared on the train. Enemy’s trucks have also made their way down and joined the chase, but were quickly dispatched using a handy grenade launcher. As it happens, one of the destroyed trucks crashed into the train – resulting in multiple cars derailing and creating an absolute havoc in the tunnel. Though able to dodge the debris for a while, the player’s truck also did crash, and the demo ended there.
Though there are no details yet on MW3’s multiplayer features (apart from the Elite online service), what we saw from the campaign is promising. This looks to be like yet another loud and explosive shooting gallery, in classic Call of Duty style that many gamers are used to. With action taking place on the streets of famous cities this time around, it could be an intriguing change from the usual conflicts in mostly distant locations. If loud explosions and a huge adrenalin rush is what you’re looking for, Modern Warfare 3 will surely deliver when it releases in November. 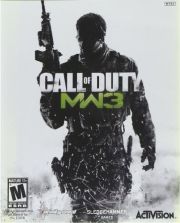 All videos for Call of Duty: Modern Warfare 3 (6)
Advertisement ▼