Graphically impressive, this over-the-top shooter may look immature, but it does hold some potential

Back in April of 2004, People Can Fly, now a subsidiary of Epic Games, released their debut title Painkiller, an overtly old-school FPS inspired by the likes of Doom and Quake. It is almost seven years later, and once again, People Can Fly is releasing a first-person shooter that feels like a bizarre hybrid of modern and classic shooter mechanics and style. Like any new IP, Bulletstorm may be riding on the coat tails of larger, more established series like Gears of War and Unreal Tournament, but at the end of the day, can it truly stand on its own? 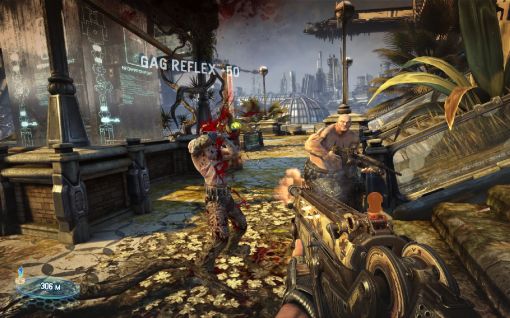 Bulletstorm puts you in command of Grayson Hunt, a meat-headed space pirate who, as unveiled in the game’s prologue, discovers along with his then-human but soon-to-be-cyborg teammate Ishi that the people they have been to commissioned to kill, whom they thought were mass murderers, traitors, and killers, were innocent civilians, reporters, and humanitarians that their commanding general simply wanted killed. From there, Bulletstorm becomes a standard revenge story with Gray and Ishi fighting their way through a planet full of dangerous flora, deadly locals, and increasingly dangerous surroundings in order to get back at the General for what he made them do. On its own, this story could have worked (although it may have come off as a bit cliché) but coupled with the game’s considerably more dominant humor and never-to-serious attitude makes the storyline feel a bit off, something just far too serious for the rest of the game’s content.
Besides the FPS standards of running, shooting, and reloading, Bulletstorm has a lot of very interesting mechanics. A Duke-Nukem-esque kick attack, not only propels enemies in the opposite directions but, through your personal time displacement field (something never really brought up or explained in the singleplayer campaign), sends them floating in slow motion, giving you time to accurately place a few rounds into their head, butt, or balls. Most enemies can take a good three or four kicks before dying so you’ll quickly find yourself stringing kicks together to get enemies exactly where you want them, whether that be a giant spiked cactus or a group of exposed wires. In my time with the game, the kick became my primary weapon. It, coupled with the slide kick that lets you quickly burst towards enemies while dodging their gunfire, becomes the quickest way to put your enemies out of commission. 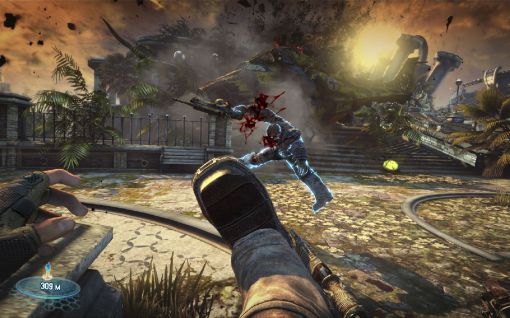 In addition to his hefty combat boots, Gray is also equipped with a “leash,” a laser whip that can be unfurled at any moment and used to pull objects and enemies around the environment. The leash’s charge shot called the “thumper” allows you to slam the ground, sending all of the enemies nearby floating up towards the heavens in wonderful, time-displaced slow motion. It’s the opportune time to tie a mine flail around an enemy’s neck or shoot a firework up their bum. Despite the coolness of the leash, I found myself only using it when forced to by in-game instructions, normally in order to progress further through the level. I always defaulted to the kick and slide as they allow you to dodge enemy fire and immobilize an enemy in a matter of moments while the leash exposes you to enemy gunfire and is hard to pinpoint on the exact enemy or object you are looking to leash. If a Bulletstorm 2 ever comes to be, the leash is one of the aspects I would most like to see worked on, perhaps with the inclusion of swinging, dual-leashes allowing you to slam objects or enemies together, as well as some other force-field-like effects that the leash could reasonably exist within the confines of the story’s science.
12Next

Our Review of Bulletstorm
83%
Great
The Verdict:
"Graphically impressive, this over-the-top shooter may look immature, but it does hold some potential"
Game Ranking
Bulletstorm is ranked #268 out of 1660 total reviewed games. It is ranked #37 out of 105 games reviewed in 2011.
267. Gyromancer
Xbox 360
268. Bulletstorm

All videos for Bulletstorm (2)
Advertisement ▼